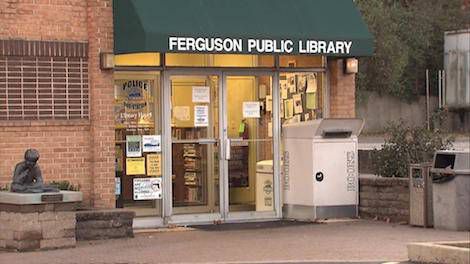 You remember the Ferguson Library. In 2014, the librarian there was our top Book Culture Hero. After Darren Wilson, a white Ferguson police officer, shot unarmed black teenager Michael Brown, the grief and anger in the community led to many months of protests. Many organizations–even schools–shut down during this time. But Ferguson Library kept the doors open. More than that, they provided support for the community, including acting as ad-hoc schools and providing healing kits for children to teach how to cope with traumatic events.

In response to the excellent work that the library was doing during this difficult time, news coverage spread across the country (and even internationally), and donations followed. In fact, hundreds of thousands of dollars of donations were given to Ferguson Library! Now, two years later, they want to share what they were able to do with these donations. An email was sent out to those who donated to show the improvements that have been made using this money.

Here’s some of what they’ve been up to:

They have also continued to do great community programs, including:

This is just a sample of what they’ve been doing to help their community. Check out their youtube video to see the tour of their improved facilities! Unfortunately, as amazing as those donations were, they can’t last forever. It has been 2 years now, and the money is beginning to run out. Ferguson is an independent library, so they rely heavily on donations.

Libraries have always been important places for community, and they are only going to get more crucial. Communities like Ferguson need their libraries to have the funding to be able to support them. I hope you consider donating again to keep Ferguson Library able to provide for the needs of their community. Having a Children’s Services and Programming Librarian has been a huge help for them, and I hope they are able to continue this work in the future.

Donate to Ferguson Library to help them continue their expanded capacity and help their community!