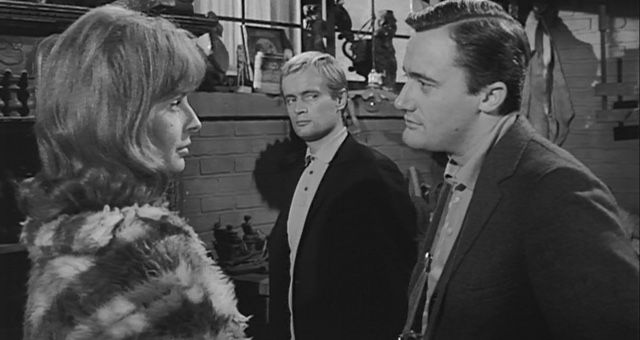 Airing from 1964 to 1968, The Man from U.N.C.L.E. combined humor and action (and more subtext than you can shake a Special at) to become one of the decade’s most popular and enduring spy shows. Like any popular property, it inspired an avalanche of merchandise, including a series of tie-in novels. One of those novels had a more difficult journey than the others, and since dissecting books based on ’60s TV shows is apparently a thing I do now, that’s the one I’m discussing today.

Grab your scuba gear, amigos, because we’re going in for a deep dive.

As you may have guessed from the title, The Man from U.N.C.L.E. was originally supposed to have just one star. Napoleon Solo, played by Robert Vaughn, was a Bond-esque super spy with the United Network Command for Law and Enforcement. And for the first two episodes, it was indeed a solo act (lol). Then another U.N.C.L.E. agent, the oddly spelled Illya Kuryakin, showed up. Female viewers lost their shit over David McCallum, Illya’s role was expanded, and the show as we know it today was born.

The show’s success spurred the creation of two dozen tie-in novels. David McDaniel wrote several of these. The last novel he wrote was, appropriately, The Final Affair. It was supposed to have wrapped up some stuff from the show, particularly the ongoing fight between U.N.C.L.E. and their evil counterpart, Thrush.

Unfortunately, by the time McDaniel finished writing this book, The Man from U.N.C.L.E. had been cancelled, and so The Final Affair was never published. Today, thanks to the wonders of the internet, it’s available for anyone to download for free.

I haven’t read any of the other novels, by McDaniel or anyone else, because I’m too busy reading fan fiction on Archive of Our Own like the entitled millennial I am. Still, when I heard The Final Affair was out there free for the taking, of course I had to read it, especially since it finally gave me an excuse to write this massive article about the TV show I’ve been obsessed with for almost two years. If nothing else, Mr. McDaniel, I thank you for that.

Right off the bat, the novel ingratiates itself to me with a comic book reference.

The nightclub brawl had followed Illya into the kitchen.

The biker they called Thing slammed through the swinging door behind him and roared, ‘Hey, Blondie—I wanna talk to you!'”

With the way Disney is snapping up properties left and right, Fantastic Four Meets The Man from U.N.C.L.E. will probably exist soon.

Anyway, the plot of the novel runs thusly: the head of U.N.C.L.E.’s New York office, Alexander Waverly (played by Leo G. Carroll on the show), has planted a mole in Thrush and wants to use him to take down Thrush once and for all. All goes well at first, but then the mole is killed and our heroes team up with a Thrush defector to destroy their nemesis at last. In the process, Waverly falls in battle, and Napoleon fulfills his destiny by becoming head of the New York office.

That all sounds very exciting, and it is! There’s a smidgen of racism, and there were a few passages that made my eyes glaze over—I’m a visual learner; you start throwing paragraphs of technical explanations at me with no pictures and I’m lost—but for the most part, The Final Affair was extremely interesting and entertaining. It does a good job of balancing the extremes the show went to, both violent (there’s more blood here than the ’60s TV censors would have liked) and silly (talking dolphins).

The only problem is the defector, Joan Perry. Turns out she is Napoleon’s wife, who supposedly died 18 years ago. This would be a neat development, except for the way this revelation is handled. The novel ends with Napoleon and Joan getting married again, while Illya abruptly returns to Russia, presumably to get away from these harebrained heterosexuals. (“Napoleon and Joan stared at each other far more than seemed necessary,” Illya thinks when they first bring Joan back to U.N.C.L.E. HQ.)

I’ll discuss all this more in a moment, but first, I need to come clean about exactly why I’m as fond of this show as I am. 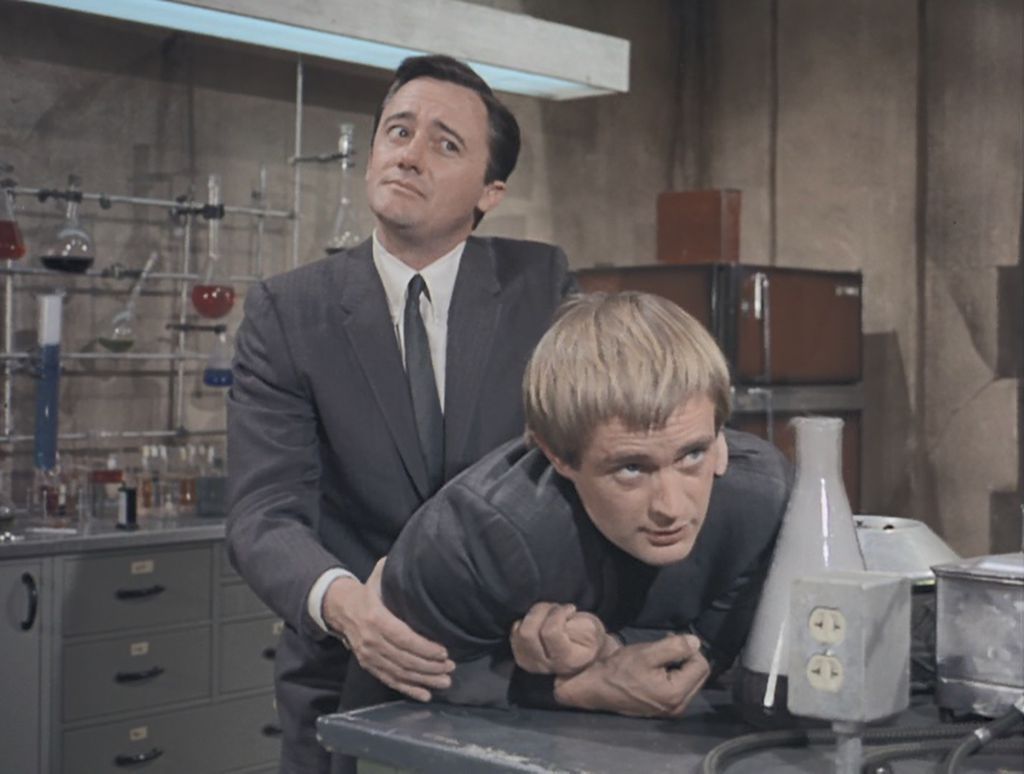 That’s it, that’s the show.

McDaniel’s novels, if The Final Affair is any indication, proudly carry on the radar-dodging tradition. In Chapter Three, our heroes stake out a bar in San Francisco. To answer your questions: yes, it is a gay bar. Yes, everyone starts ogling Illya. And yes, Napoleon’s plan to deflect attention is to…

“‘Hold my hand for a few minutes. And smile when you look at me.’

‘Well…’ Illya extended his hand across the table and Napoleon took it. He looked defiantly along the bar and eight or nine pairs of eyes reluctantly returned to the big mirror on the wall behind the spigots and racks of multicolored bottles.”

Illya claims to be confused, Napoleon promises to explain later, and I’m checking my browser tabs to make sure I didn’t click over to AO3 by mistake.

That isn’t the novel’s only suggestive bit of dialogue, but my point is, I (and the fans who came before me) didn’t have to work too hard to see a little extra something between the men from U.N.C.L.E. So while I obviously wasn’t expecting The Final Affair to end in a big gay wedding (though I wasn’t expecting the scene in the gay bar, either), the fact that McDaniel went out of his way to separate them as much as possible is disappointing.

The Final Thoughts on The Final Affair Affair

I wrote that last section not just because I like talking about queer stuff with internet strangers, but also so you understand where I’m coming from in my critique of The Final Affair. Any ending where Illya and Napoleon sail into the sunset in opposite directions is going to annoy me on principle, but that’s my hangup, not the writer’s.

The answer in this case is both. I may not feel this strongly if I didn’t ship them, but that doesn’t change the core problem. Joan has been voluntarily working for Thrush for two decades. As both a secretary and a field agent, she has aided their mission to take over the world by any means necessary, including but not limited to theft, kidnapping, general destruction, torture, and mass murder. But hey, she really loves Napoleon, so that makes it okay.

And that’s another problem: Joan never expresses remorse for her years on the other side. She didn’t defect from Thrush because of a crisis of conscience; she defected because that was the only way to get Napoleon back.

Now, I don’t think Napoleon being so quick to take his wife back is out of character, because Napoleon is an idiot, as Illya will happily tell you. 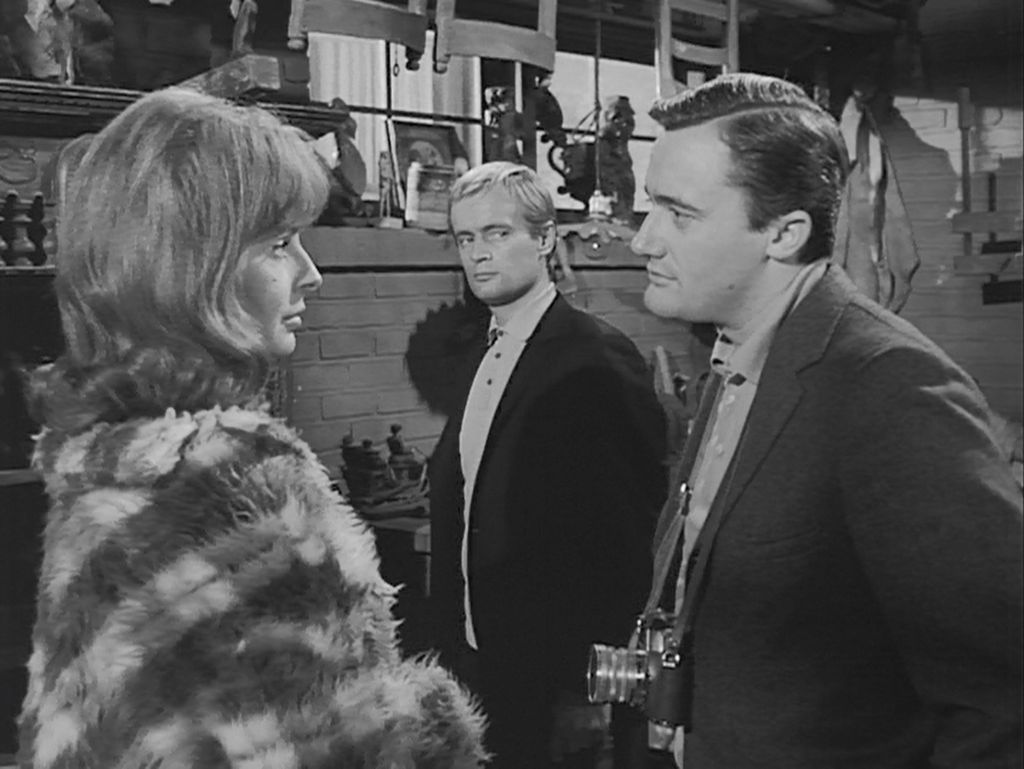 But while Napoleon being dense is justifiable, the fact that no one else seriously questions Joan’s identity or sincerity—isn’t it awfully convenient that she turns up out of the blue, willing to turn over the exact information they need in exchange for going along with U.N.C.L.E.’s two best agents on a critical mission?—is mind-boggling.

The only thing worse is Joan’s apparent sincerity. She never even thinks of betraying U.N.C.L.E., which is kind of insulting, both to the book and to the show. The Final Affair places such emphasis on careful planning and intricate operations that Joan’s opportune reappearance, completely devoid of twists or guile, feels weird.

As for the TV show, The Man from U.N.C.L.E. was surprisingly decent at depicting capable and threatening women. Female Thrush agents were never to be trusted, especially if they made goo-goo eyes at you (see: “The Deadly Games Affair,” “The Nowhere Affair,” and others, I’m sure). Here, again, Joan’s story arc doesn’t fit. She literally only exists to give Napoleon what I assume was McDaniel’s idea of a happy ending.

So, no, I wouldn’t consider this a satisfactory conclusion to the series, or even to the book itself. The stuff about destroying Thrush was really great, but the characters themselves aren’t left in nearly as good a place.

Let me wrap up this post with some positivity. McDaniel is a skillful writer with a real knack for capturing the spirit and intrigue of the show. And while the romantic subplot prevents me from actually recommending this book in particular, I don’t regret the time I spent reading it or writing this article. And if you can find any of McDaniel’s other novels, you might want to pick them up. I know that’s what I’m going to do.