I was a voracious reader, even at nine years old. This was also in the ’80s, before the YA revolution, and notably before I discovered Tamora Pierce and Patricia C. Wrede. The local Walden books was pretty much Baby-Sitters Club and Sweet Valley High central, neither of which—no disrespect meant to anyone who loved those books—interested me. Baby-sitting sounded like the worst thing on the planet and high school looked horrifying because it involved arcane things to do with boys and makeup.

Enter: The Secret of the Unicorn Queen. Only six books in that, compared to the never-ending saga that stretched out of the big MG to YA series, but what a six books it was. Women with swords riding around on unicorns and saving the men! That’s really all I needed to know. I bought each book the minute it came out, with my hard-earned allowance money.

My unicorn phase lasted well into high school and involved a lot of cheesey-yet-awesome trapper keepers and folders. My badass-women-with-swords-saving-the-day phase is still going strong and seems in no danger of ever ending, and I think The Secret of the Unicorn Queen gets credit for starting me down this path.

A lot of my childhood books ended up being given to my nieces by my mom, after I first abandoned them in her crawl space. That’s why I ended up spotting my old copies of The Secret of the Unicorn Queen sitting high on the shelves, waiting for one of the girls to be old enough to reach it.

Of course I re-read them. They’re only about a hundred pages each.

The Secret of the Unicorn Queen is a portal fantasy in which regular 14-year-old Sheila McCarthy gets transported to a world where there is magic instead of science, and hooks up with a roving band of female warriors (plus one token male to be the love interest) lead by the Unicorn Queen, Illyria. They ride around on unicorns, fight with swords, and save their country from an evil despot named Dynasian and the dark wizard Mardock.

For books that started being published nearly 30 years ago, there is a lot of crunchy goodness that we still wish we saw more of in general. The whole saga centers around a racially diverse group of women who fight together and support each other and spend book after book rescuing men, unicorns, or both. There are different ways of fighting (swords, science, magic) represented, and different ways of being female—and beautiful moments like this:

“I can’t believe this,” Sheila said. “They’re all acting like…”

“Like women?” Pelu asked with a laugh. “There’s nothing that says we can’t be seasoned warriors and still like pretty new clothes.”

While Sheila (from the land of science!) is the primary viewpoint character, everyone gets a moment to shine. It’s pure, delightful escapism powered by hilarious fridge logic. And people ride around on unicorns and stab things with swords. I cannot emphasize this point enough.

Unfortunately, it can’t all be unicorns and swords.

It’s amazing how clearly you can remember the great things about books that were important to you in your childhood, while the… less great things have fallen by the wayside, or never registered in the first place. 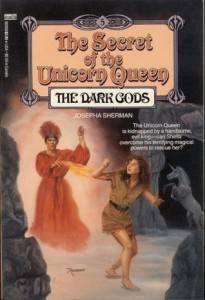 The six book series is functionally two trilogies that take place back-to-back, each beginning with our heroine going to the magical land, then returning home and not being sure if she fits in any more. But the first trilogy? Much better than the second. The six books were written by four different authors (Josepha Sherman, Gwen Hansen, Dory Perlman, and Suzanne Weyn), and when you’re not ten and excited as heck about SWORDS AND UNICORNS, it really shows. Sheila’s rival in the requisite (barf) love triangle, Dian, can’t seem to figure out where to set her slider on the Catty Bitch Scale. No two writers seem to agree on if characters are warriors who happen to be women, or women-warriors. (Take a wild guess which of those terms child me and adult me preferred.) And so on.

More bothersome, when you get to the second trilogy, two out of three of the villains (all the villains are male, because we are riding unicorns and stabbing swords into the patriarchy) are explicitly non-white. Which goes beyond creepy, when Nanine (the only black unicorn rider) also suddenly starts being described as “exotic” and the cultures they encounter are presented as “primitive” and “barbaric.” Cultures set in locations that are nudge-nudge wink-wink equated geographically with Egypt, north Africa more generally, or “the east.” (Spoiler: in “the east” they practice Totally Not Kung Fu and bow a lot.)

Unicorn Queen, why? I wish I could say those are only artifacts of the books being almost thirty years old, but then you take a look at some of the conversations currently going on in literature, and… here we still are. Yet when I read the books, as a pre-tween longing for something I couldn’t even articulate, they felt revolutionary to me. I’m not going to make any more sweeping claims about their literary importance than that, considering they don’t even have a Wikipedia page. But if nothing else, they set some high standards for what I wanted out of my YA fantasy literature for years to come: no girls with swords? We ain’t even going to talk.