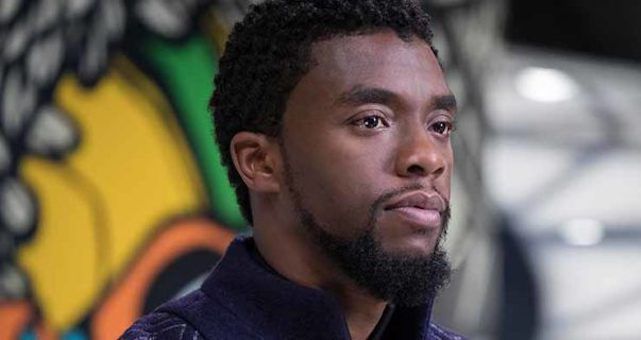 At first glance, it might seem as though most superheroes can choose between basically two day jobs: journalist or billionaire playboy. (Green Hornet is both!) Once you get out of Metropolis and Gotham, though, you find a wider range of career options. There are superhero lawyers, pilots, professional athletes, office workers, and of course many, many police detectives.

But sometimes you find superheroes going down less expected career paths. Here’s a few of my favorite surprising superhero jobs:

There are few jobs more important than feeding people, so it’s probably not great that pretty much any time you see a superhero working in the food industry, it means they’re spiraling. Cyclops signed on to the crew of a fishing boat, Forrest Gump style, while he worked through his grief over Jean Grey’s death (the, uh, first time she died). Daredevil coped with the destruction of his entire personal life in the famous “Born Again” storyline by becoming a short order cook (which is probably better than the alternate universe story from a couple years ago where he was the Kingpin’s enslaved chef, serving up human flesh to Wilson Fisk and his guests). And Wonder Woman’s brief stint at the fast food joint Taco Whiz was driven by financial desperation and not a love of overly processed Mexican-adjacent cuisine. 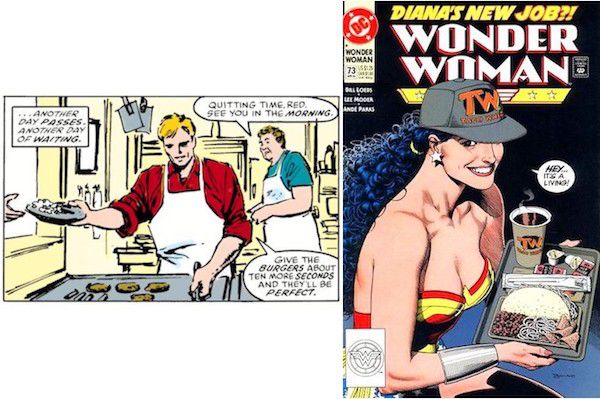 I love you, Diana, but why is there spaghetti in that taco?

At the other end of the prestige spectrum, there are the superheroes who have either run for office or taken political appointments. Green Arrow and the Flash (Jay Garrick version) have both successfully run for mayor, while Daredevil oopsed into office after taking a job as deputy mayor to keep the actual elected mayor, the Kingpin, in line; like so many past NYC mayors, Fisk was subsequently shot by ninja archers, putting Daredevil in the hot seat. Barbara Gordon was a congresswoman in the ’70s. Iron Man briefly served as Secretary of Defense, and over on the DC side of things, Black Lightning was Secretary of Education under President Lex Luthor, in a cabinet that also included Sgt. Rock as Chairman of the Joint Chiefs of Staff, Amanda Waller as Secretary of Meta-Human Affairs, Sam Lane (Lois’s dad) as Secretary of Defense, and Cat Grant as Press Secretary.

Lex is a villain, of course, but we have had oodles of alternate universe and What If? superhero presidents across all the publishers, from Nighthawk to Wonder Woman to Captain America, the lowest hanging fruit of all. The most frequent occupant of the Oval Office in AUs is probably Superman, most notably the Barack Obama–inspired Calvin Ellis of Earth-23. 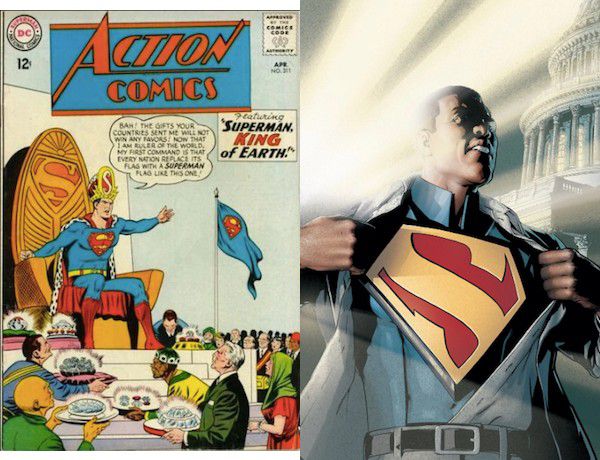 Okay yes, that’s Superman as king on the left, but the cover was too good to leave out.

It’s not particularly weird that a superhero—someone dedicated to bettering their community—would be a teacher in their day job. It’s just weird for some heroes. Like, Black Lightning as a teacher makes total sense. But what about the Huntress, whose original shtick was “too violent for Batman (because of all those mafia guys she kills)”? Or the fact that Green Lantern Guy Gardner, the worst socialized man in space, worked as a gentle and compassionate special education gym teacher before he got his ring? (Also a social welfare caseworker. Also a cop. Guy’s had a lot of retcons.) Weirdest of all is probably Black Panther, who, having relinquished his throne the first time he joined the Avengers to serve the world and not just Wakanda, also took a job as a teacher in Harlem. Thematically it’s really touching and important to see a character like T’Challa working with African American kids and being a part of a community that was hit especially hard by NYC’s late ’70s woes, even if the actual comics have more than a touch of poorly researched exoticism going on. Logistically, though…like, who is running Wakanda? 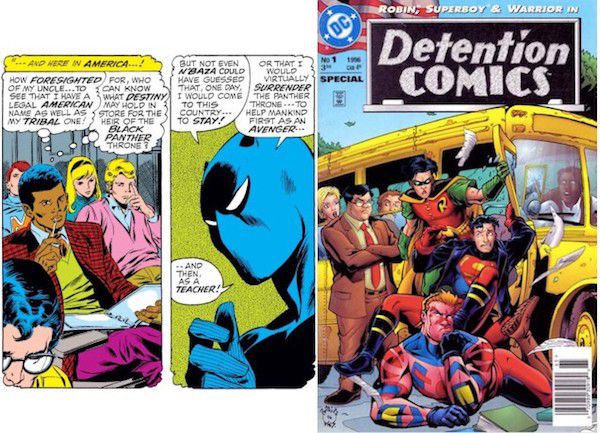 The comic on the right is an obscure gem and if you find it in a dollar bin you should buy it immediately.

Yeah, so there was a distressingly long period of time where basically the only job that existed for female characters in comics was “model,” because what higher aspiration could a woman have? Occasionally they would also be a photographer or fashion designer, but model was almost always part of the package. Now, real women working in fashion are smart and talented badasses, models included, but this was less about being smart and talented and more about being professionally hot. Please note I’m also not talking about characters like Millie the Model, who was created by a woman (Ruth Atkinson) and remains one of Marvel’s most long-running female leads. I’m talking about when an all-dude team goes “Huh, this woman in this superhero book should probably have a job…I know, model!”

The only dude I can think of who has worked as a model is Booster Gold. God, I love him. 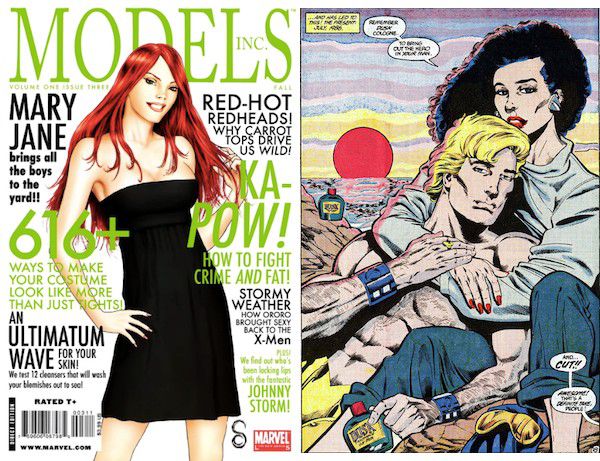 Each caption on that magazine cover is more irritating than the last.

And then there are the delightful ones that don’t necessarily fit into broader categories! Dazzler, for example, is the only disco star in comics that I know of, which just goes to show that comics are artistically bankrupt. Zatanna is a stage magician.

Flamebird, Batwoman’s cousin, was a tennis pro before she was a superhero, and Arrowette became a gold medallist archer after she was a superhero (although technically she was by necessity an amateur archer and not a professional). Similarly, Black Lightning was an Olympic decathlete before becoming a teacher/presidential cabinet member. Guy Gardner and Booster Gold both played college football and would have gone pro except for, you know, being busy having origin stories.

Green Arrow and Black Canary had their own florist shop for a while, Sherwood Florists (YES), complete with a giant painting of Robin Hood. (Green Arrow doesn’t have…the best kept secret identity.) Kyle “Green Lantern” Rayner used to be a comic book artist, fittingly enough. Batgirl was a librarian before and after she was a senator.

And finally, Thor has been, at various times: a prince, a king, a doctor, and a frog. (The frogging was amateur. Hopefully the doctoring wasn’t.) 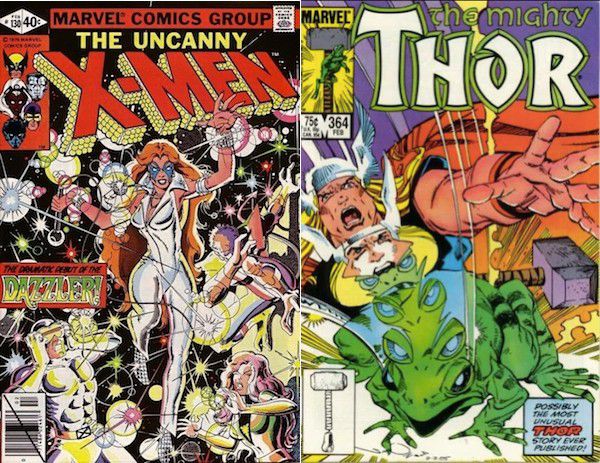