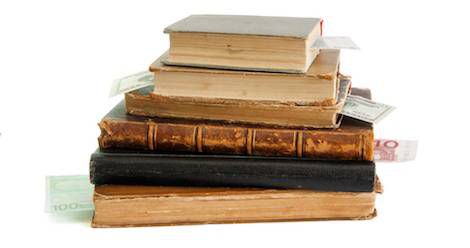 I’m not very good at tipping. I do it, and I will use the guidelines provided to me on the bill at the end of a meal to add the 18% or 20% or whatever it is. I do it because it is expected and because the person serving me is probably being paid something like three dollars an hour.

But this is why I’m not very good at tipping: I don’t have the mentality that this is normal. I don’t understand how it is okay to be earning three dollars an hour. To me, that’s pocket money. It’s what the characters of the Baby-Sitters Club charged back in the 1980s in fictional Stoneybrook for looking after kids for an afternoon. I’m from a country where we don’t tip because we have high wages, annual leave, sick leave, maternity leave, and laws about work conditions and how long you can work for without a break. So learning about employment conditions in the US came as a bit of a shock.

As part of my ongoing book-guided education to America, I recently read Nickel and Dimed: On (Not) Getting By in America by Barbara Ehrenreich and Hand to Mouth: Living in Bootstrap America by Linda Tirado. What I read in those two books were depressing and appalling and it raised so many questions. For a country that is so focused on rights (the right to free speech, the right to bear arms, the right to individual liberty…), how is it acceptable that there are workers out there who don’t have the right to pee whenever they need? Who apparently don’t have the right to take breaks during long shifts, or even drink water as they work? Who have to work through illness and injury because sick leave isn’t a thing? In all this talk about rights in America, where are the human rights?

In Nickel and Dimed, Ehrenreich goes undercover as a journalist into the low-wage economy, and works in jobs like waitressing, housecleaning, and retail to see how or whether it is possible to survive when you are earning minimum wage. Hand to Mouth is a more recent publication, and is Tirado’s account of actually living the life that Ehrenreich briefly assumed. Some of the moments and quotes from the books that stuck with me:

It seems that it is very hard to break out of cycle of poverty, and that one minimum wage job is barely enough to survive. When the weekly budget is broken down to the last penny, your job is insecure and the scheduling unpredictable, housing is poorly maintained and difficult (sometimes impossible) to get, each day sounds like it is physically, mentally, and financially draining. It also seems to me that being poor has very little to do with how hard you work, how kind or intelligent you are, or how resourceful or responsible you are. Instead, it is more about how lucky you are and to whom you were born.

These books offer a glimpse into a world inhabited by about 10 million Americans, a world that I think more of us who are fortunate enough to not inhabit ought to be aware of. Poor people are not poor because they choose to be, or because they aren’t good enough, smart enough, hard-working enough to not be poor. My position of relative wealth and financial security is not because I am smarter or more hard-working than Tirado or the millions of others like her, but because I was lucky enough to have parents who provided me with security, stability and a good education as I was growing up, and that my life circumstances have been relatively smooth.

[Note: I have realised upon finishing these two books that I really want to know more about this topic. If you have further reading suggestions, hit me up.]