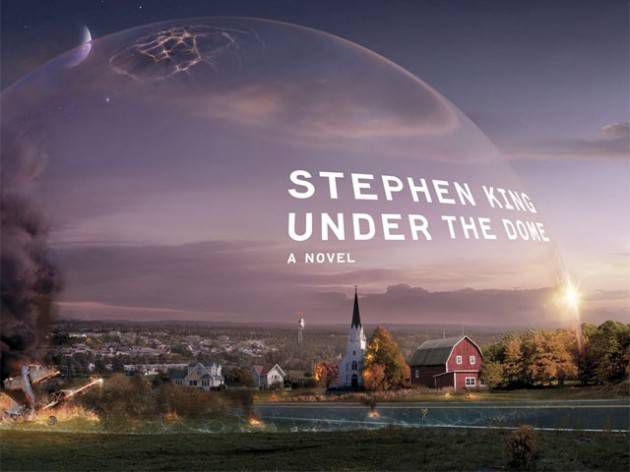 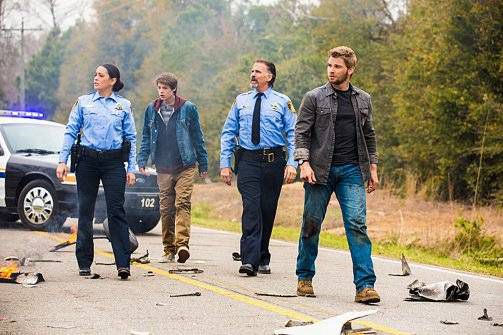 A general sense of “What the Hell?” pervades Under the Dome’s first episode.

We open on a dark sky. Pan down to an egg, framed so that the upper half forms a perfect dome. The egg cracks. A baby bird emerges. Its mother squawks and flies from the nest. We follow its swerving path through a quiet forest. It alights upon a fallen tree. A shovel clatters to the ground nearby and the frightened bird flies off. The shovel, we see, belongs to a man digging a suspiciously grave-like hole in the ground. Aaaand pause. Fifty-one seconds into the pilot episode of Under the Dome, CBS’ new drama based on the Stephen King book of same name, and there it is: our first dead body.

We’ll find out whose body soon enough, but by that time, we’ll have bigger fish to fry. Maybe too many, to be honest. There’s the police chief with the bum ticker, there’s the jealous boyfriend with an angry streak, the new editor of the local newspaper, a couple of seized-up teens, and, of course, our man with the shovel. All of these people, along with the rest of Chester’s Mill, are soon stuck inside a massive dome-shaped energy field that appears suddenly and violently. Chaos ensues, naturally. The dome’s appearance severs outside communication, and the townspeople scramble to assess the situation.

The chaos of the dome’s descent soon gives way to the questions that a show like this is meant to pose, questions that have been asked on screen at least since Alfred Hitchcock’s Lifeboat in 1944: what happens when people are stuck in close proximity to one another and placed under extreme duress? Should conventional judgment be ignored? Who has power and how do they get it? Who can be trusted to make decisions for the newly isolated group? Who can’t?

Monday’s episode kept my curiosity stoked by offering many leads, but only a couple of definitive answers to these quandaries. This is good. In fact, this is the only chance the show has to keep me watching. The pilot recalls those first few episodes of LOST, which, for my money, are still some of the best pieces of television ever produced. That show was initially compelling because we wanted explanations for the island’s bizarre happenings as much as the characters did. I’m sure the producers of Under the Dome have similar hopes for their show, without the faltering that came later. J.J. Abrams famous ‘mystery box’ approach worked wonders, until it came time to pull back the curtain and provide some explanations. Too often, the answers LOST provided to its biggest questions were not nearly as interesting as the questions themselves, and the show shed viewers with each successive season.

I hope that Under the Dome continues to embrace mystery, leaving its guns over the mantle until they absolutely have to be fired. I also hope that the show’s scope tightens at least a little as the season continues. There are a lot of balls in the air by the end of its first episode, and a show with this many secret-having characters runs the risk of over-saturating its weekly forty-two minutes. (You know a show has a lot going on when the dead body that greets us at the beginning of the episode is the fourth most pressing concern by episode’s end.)

All that to say I’ll be back for episode number two (“The Fire”) next week. If the next twelve episodes are as compelling as the first one, Under the Dome will be just fine.