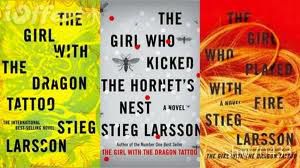 Like boatloads of others, I have torn through the first two novels in Stieg Larsson’s Millennium trilogy and has already pre-ordered the final chapter. And while you couldn’t reasonably call them edifying, they do read awfully damn well.

Still, I can’t let the particular weirdness of this phenomenon pass without some eye-brow raising. So here are a few observations on the series so far:

This list is a bit grumpy, but it’s born of a head-scratching affinity for the books that the Ape even spends this much time thinking about them. If you are traveling by plane or spending some quality relaxation time somewhere this summer, you could do a hell of a lot worse than these. Just don’t think too much about why you like them.