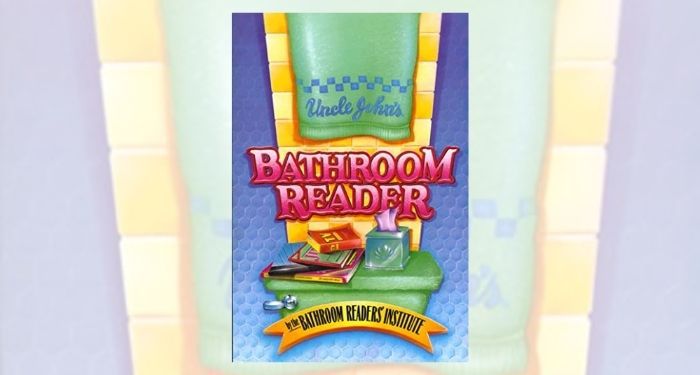 Bookworms and pop culture junkies alike can’t help but be familiar with a particular line of books geared towards reading in the restroom: Uncle John’s Bathroom Reader. Notably featuring trivia tidbits and short articles geared towards passing time in the bathroom, the series has published nearly 35 annual installments — not including spin-offs and special editions. But many readers often ask the origin of Uncle John and whether he was even a real person.

The Bathroom Reader was indeed founded by a man named John Javna, who in 1987 found himself sitting on the toilet with nothing to read. Thus, he dreamed up a series of books dedicated specifically to reading in the bathroom, composed of short but interesting anecdotes that helped pass the time. To actually write the books, he hired his brother Gordon.

The first edition of Uncle John’s Bathroom Reader arrived in 1988, published by the Bathroom Readers Institute, and included brief histories of various subjects and random bits of unusual trivia. In reality, the books are published by Portable Press, an imprint of Readerlink Distribution Services. Early sales proved quite profitable, leading to several sequels in the years that followed, written and produced by the Javna brothers and a team of freelancers. To date, upwards of 15 million Bathroom Readers have been sold.

The formula for the Bathroom Reader was simple: each article must be simple and to the point, and each page has to include a fact or piece of trivia that will amaze and/or amuse its reader. Largely predating the genre of quick and easy entertainment that would soon arrive in the form of podcasts, the blogosphere, YouTube, and articles on the internet (like this one!), the early success of the Bathroom Reader series established it as a valued product in the publishing sphere.

But the success of book series like Uncle John’s would not be without controversy into the 21st century. With sales of physical books falling and countless North American independent book retailers going under in the 2000s as a result of not keeping up with the takeover of the digital age, it allowed a previously untargeted category of retailers that were now suddenly very interested in selling physical books: big box stores, but most importantly price clubs.

Price club chains such as Sam’s Club and Costco found themselves loving to display discount books in their stores. While they continue to make up a relatively small percentage of these chains’ total income, the appeal of being able to sell them at a discounted price not usually available at most bookstores meant that people who still read were buying and getting rid of them quite quickly.

At the time, publishers were employing a company called Advanced Marketing Services to distribute easily marketable discount books like Uncle John’s to price clubs. Noted for “near-exclusive access” to price club chains and driving a large portion of the publishers’ profits, the company started counting for as much as 10% of publishers’ total revenue. But it all came crashing down in 2003, when scandal and controversy exposed a history of misconduct at Advanced Marketing Services.

The management was found to have been duping publishers with fake promotions and discounts, and in the end some publishers were owed up to eight-figure debts, with one publisher in Pennsylvania losing $1 million as a result of the scandal. In a 2016 interview, Gordon Javna noted the particular success of Bathroom Readers in price clubs and big box stores, specifically in Oregon. Advanced Marketing Services, which at one time owned the Uncle John’s Bathroom Reader series, went bankrupt in 2007, leading to new owners.

Thereafter, the change in ownership eliminated Gordon’s job and many others when the parent firm closed the Ashland, Oregon, office in 2016, choosing to produce the books mainly from California. John himself had retired from the enterprise around 2000 to care for their elderly parents, and today neither of the Javna brothers are directly involved with the publication of the Uncle John’s books.

They are still, however, the authors of at least ten other titles each year, including but not limited to Primetime Proverbs: The Book of TV Quotes, 60s! A Catalog of Memories & Artifacts, and Fifty Simple Things You Can Do to Save the Earth. Uncle John’s Bathroom Readers and its associated spin-offs might not be the most prestigious forms of literature, but they are still reliable bestsellers over three decades since their inception and their influence can be felt across all forms of quick entertainment media. Would starting a podcast or YouTube channel about the book series that basically inspired podcasts and YouTube channels be a bit too on the nose?