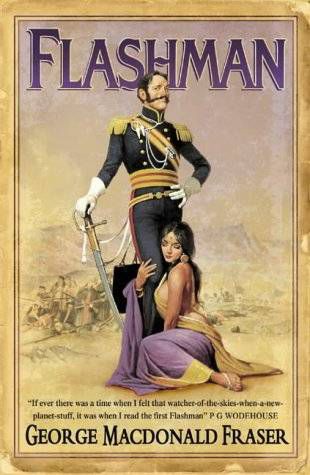 I’m grateful to Christopher Hitchens for many things, but one that stays with me is an introduction (via a Vanity Fair article) to the Flashman series of historical novels by George MacDonald Fraser. They’re the only novels that have decisively made people move away from me on the subway. Something about the 1970s covers, with their racially insensitive depictions of half-naked women, seems to put them off. 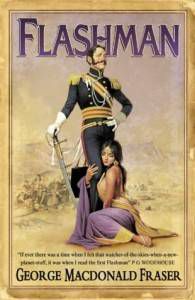 Fraser’s Flashman is a bully, a coward, a womanizer, and ridiculously vain about his facial hair. A member of the British Army in the mid-1800s, he’s posted in Afghanistan, India, China, and the Crimea, somehow scuttling up the ladder even as he tries to dodge any shred of responsibility or honor. He’s politically incorrect on so many levels he could be an un-PC parking structure. Also, he’s hilarious.

Somehow, the humor, the intelligence, and the brio of the writing make Flashman’s misogyny and jingoism palatable. And so many juicy historical details! Lola Montez, for instance—I would never have known about King Ludwig’s courtesan/”Spanish dancer” if it wasn’t for Royal Flash.

Flashman’s the first to admit he’s a scoundrel, and he’s an equal-opportunity offender. The author plunks him into major historic events, like the Second Opium War, and lights the powder keg with a pratfall or an ill-timed bit of skirt-chasing. (Some titles have recently been reissued by Everyman’s Library, in gilt-edged editions with nearly noble-looking cover designs. That’s not the point, lads.)

The result is, for me, irresistible. The Flashman novels join a handful of books that are by today’s standards off-putting or downright offensive, but I still find valuable, even beautiful. At many decades’ distance, I compartmentalize the objectionable elements. Does this make me a naïve or willfully uncritical reader? In thrall to a great narrative voice, I often mentally acknowledge derogatory language and then go right back to relishing the story.

Last year, NewSouth Books published a sanitized version of Mark Twain’s Huckleberry Finn and The Adventures of Tom Sawyer, replacing loaded, now-offensive nouns with words like “slave.” Op-ed pages across the country flared with arguments about this edition. The editor, Alan Gribben, said that by changing the language, he made these American classics accessible to students and “general readers,” protecting them from the disturbing terms. I stand with those who believe that general readers should be exposed to a novel’s authentic history, troubling language and all.

However, I pause when I get to children’s books. When and how should young children be exposed to stories with disparaging pictures or words? Cleaned-up versions are a convenient answer; such revisions of books for young readers often go unnoticed, or applauded. For instance, Little Golden Books reworked Helen Bannerman’s turn-of-the-twentieth century story Little Black Sambo, turning it into The Boy and the Tigers. The tigers still spin into butter, but the teeth are gone.

How about you—can you get past some offensive elements of older novels? Are there un-PC books you unrepentantly love?