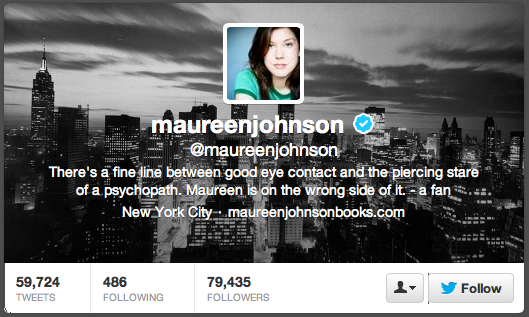 Ok, so last time I wrote about the way some authors behave on Twitter, lots of authors got super annoyed with me. I thought I’d come back with a story about two authors whose social media presence is a real model for other authors to follow. In fact, I discovered these two authors by their phenomenal Twitter personae and bought their books because of how great they were at Twitter.

That’s right, author-friends: people who make me smile or think on Twitter totally make a sale. And they don’t make a sale by sending me auto-DMS about their NEW! BOOK! OUT! NOW! — something anyone who blogs about books comes to deal with eventually. They make a sale by making me want to hang out with their words for extended periods of time. They make a sale by being, you know, interesting.

Ok, Author 1 in my list of Writers Who Kill It on Twitter is Maureen Johnson. Johnson uses her Twitter feed not to bleat at you to buy her books (there is very little self-promotion at all), but instead to create a community for her readers. She talks about her life, makes funny observations, mobilizes people for good causes, and generally makes you feel as though you are part of a larger community of like-minded people. She’s funny but never particularly pointedly snarky. Instead, she’s warm and personable. She responds to people who interact with her and she doesn’t exist exclusively on transmit. When you tweet about her books, she notices that you have.  Johnson’s Twitter is lively and active and reciprocal. 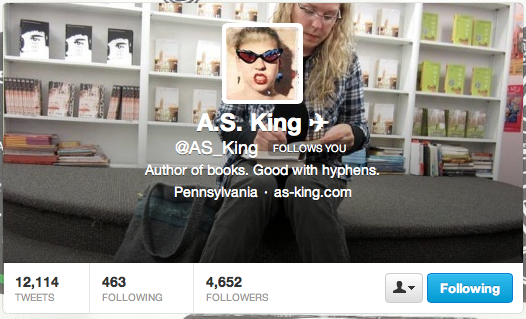 Likewise, A.S. King is another writer I found on Twitter, kind of fell in love with, and then happily discovered she’s also a great writer. At any given point, King’s Twitter feed is mostly replies and retweets.  She’s one of the most engaged writers I’ve seen on Twitter lately, and she makes an effort to contribute to larger discussions, mostly about YA and book culture but also just about, you know, life stuff. King’s Twitter feels authentically a part of who she is and not like a sales pitch. She’s charming and self-depricating and witty, and her responses to fans and critics alike read as a genuine desire to engage with other people’s ideas.

In both cases, I saw multiple retweets from these writers that piqued my interest.  From there, I started following them and realized that I kind of wanted to hang out with them both. I bought a book by each of them and discovered that their Twitter personae and their writerly voices were delightfully in sync. I bought more books. I became a fan. In both cases, I’ve had positive Twitter interactions with them and in both cases I find myself looking forward to their tweets.

This is how you do it!

I have bought a number of books by both of these authors and at no point was a purchase prompted by a BUY MY BOOK or a NO SERIOUSLY BUY MY BOOK or an OH MAN DID YOU KNOW YOU CAN BUY MY BOOK. In both cases, my motivation to purchase was due to genuine interest in the way the two women write and communicate. Which is exactly why one should purchase a book, isn’t it?

Here are my top five things I look for in an engaged tweeting writer:

What do you look for in an author’s kickass Twitter feed?