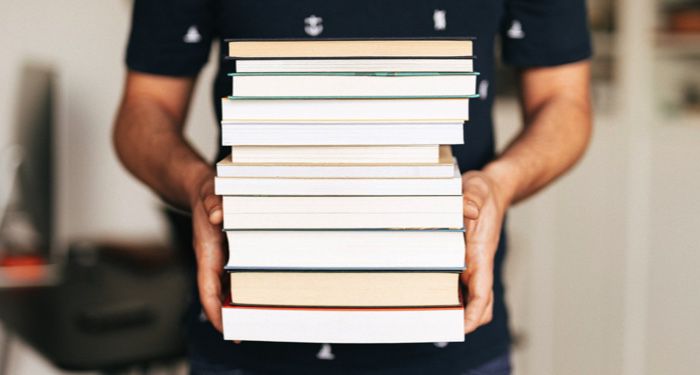 In a year where it felt like everything turned upside down, I was super excited to have the opportunity to chat with Tumblr’s resident Trend Expert, Amanda Brennan, to discuss 2020’s book trends on the platform and what she expects to see in 2021.

Every year, Tumblr compiles their “Year in Review” where they list the trending topics on the platform from October to October. Data is compiled from recording original posts, likes, reblogs, and searches within the different tags.

In case you missed the big reveal, here are the top 10 trending books and authors on Tumblr over the past year:

So let’s break this down a little, shall we?

Glaringly present on the list is a certain author (and series) Book Riot is no longer covering in response to their very vocal bigoted views. With Gen Z being the main demo on Tumblr now, I was curious what the general feel of the posts were. Were they supportive? Were they condemning? With all we know about Gen Z being very active in social issues and expecting accountability in the companies/platforms they give their time to, I was personally surprised the rank was that high.

And I loved what Amanda had to say. She remarked that the loyalty Tumblr users have to the beloved book series has nothing to do with the author. In fact, the fandom has taken ownership of the story and transformed the community into one that is openly accepting and embraces differences. Of course, that’s not to disregard the very valid feelings of those who cannot or do not want to separate the work from the author. The author’s comments have been more than hurtful and predatory towards the trans community and people who care about them.

With the announcement of the Percy Jackson series Disney+ adaptation and the publication of The Tower of Nero, the final book in the Trials of Apollo, Rick Riordan had a great year, jumping seven spots from last year to #2 on the author list. In addition to having a new release to hype up (including fan favorite couple Solangelo ranked #92), Amanda mentions that Riordan’s undying love for his readers and devotion to the fandom has meant so much to Tumblr users.

Having these two authors back-to-back is even more interesting when you look at how they treat their fans. As mentioned, Rick Riordan has gone out of his way to stand up for fandom, ensuring that he will have a part in the Disney+ series and always recognizing readers’ feedback about the representation among his characters. It really gives a stark comparison between an author essentially being written out of their fandom and an author who is all about giving back.

Check out #7 on both the book and author lists. Be honest. Were you wondering why Donna Tartt and The Secret History was there? With much of the world spending more time in their homes this year, it makes sense that “aesthetic” became a leading trend on the platform, specifically dark academia.

According to the Aesthetic Wiki, dark academia is an “aesthetic that revolves around classic literature, the pursuit of self-discovery, and a general passion for knowledge learning.” You can also see the popularity in the presence of Jane Austen who ranked #5 (up seven spots from last year) and Emily Dickinson who entered the list at #15.

Amanda isn’t surprised that dark academia and aesthetic in general found popularity this year: “Quarantine gave us all a mirror to really look at ourselves and ask ourselves, ‘Are we really who we want to be?’ And Tumblr is a great place to explore who you are at your core.” This timeless feel that the classics bring fit perfectly into this feeling of self-reflection. In addition, the amount of transformative works and retellings present in these classic tags, mirrors the current publishing trend of retellings, particularly in the YA genre.

It makes sense that authors with established fandoms, such as Leigh Bardugo, Cassandra Clare, Rainbow Rowell, etc., will have more users talking about their releases and are more likely to trend. This is why Midnight Sun and Stephenie Meyer both appeared on the 2020 list, with Meyer not even making the top 100 in 2019.

Amanda explained that with books, most of the “drops” in book popularity aren’t necessarily because fans have lost interest, but because something else has caught their eye even more—again, playing into why established fandoms can make the trend list easier. The biggest surprise for Amanda was the appearance of Tamsyn Muir’s Locked Tomb series, with Gideon the Ninth and its sequel Harrow the Ninth coming in at #30 and #46 respectively. It’s not often that a new fandom “debuts” so high, but as Amanda noted, it’s gay sci-fi. “It’s so Tumblr.”

As for what we can expect in 2021, Amanda says we should count on seeing more “older” authors come back into Tumblrsphere. Similar to what we saw with Donna Tartt and Emily Dickinson, Amanda noted that Tumblr users have a fascination with escaping to other realities and this has helped the fantasy genre skyrocket in popularity, as well as people going back and reading things that are comfortable to them. Even when the world goes back to normal, people are still going to want that place they can forget their troubles and dive into fandom.