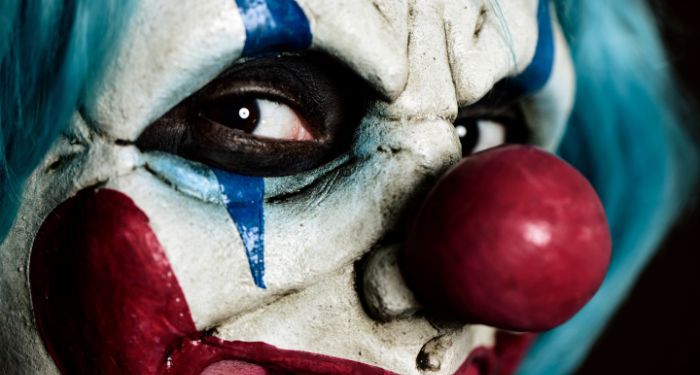 Superhero comics have many well-worn motifs which have been popularized, subverted, and scoffed at over the decades, like secret identities, reporter girlfriends, and radioactive everything. In Tropes in Capes, I’ll look at the history of these elements, including how they got started, when and if they fell out of favor, and where they are now. Today: evil clowns!

Now, I know what you’re thinking. Surely there can’t be that many clown-themed villains in comics, right? Just the Joker, Harley Quinn, and maybe some knockoffs?

Alas, I am sorry to tell you that I was able to come up with a list of over two dozen evil clowns or clown-adjacent villains, and I suspect I haven’t gotten them all, given the obscurity of some of these bozos. (Get it?) This trope has legs. And really big shoes on the ends of them.

The Joker is, in fact, the earliest recurring clown villain superhero comics, debuting in April of 1940, and created by some combination of Bob Kane, Bill Finger, and Jerry Robinson. (As is so often the case with early Batman characters, accounts from the three men varied as to who contributed what.) Inspired by a deck of playing cards, the Joker was originally the sadistic murderer we know him as today, but was softened into a zany but essentially harmless adversary during the kid-friendly Silver Age, only to reemerge as a genuine threat as comics grew darker during the Bronze Age; that progression has only continued over the past few decades. Though there have been times when the Joker has vanished for a handful of years, his mostly steady presence over the past eight decades shows how flexible this trope is, which may account for its popularity. A clown villain can be a lighthearted nuisance or deeply disturbing, Cesar Romero or Heath Ledger.

Clown villains certainly leaned towards the lighter side of the spectrum in Superman’s early days. Once the Man of Steel graduated from thwarting nameless gangsters, he was quickly given a roster of recurring villains best collectively described as “impish.” The Prankster (debuted 1942) and Toyman (1943) aren’t exactly clowns, per se, but they’re similar, and their illegal — but rarely seriously dangerous — antics were a fun way to keep Superman busy. Even the Superboy comics, featuring a younger version of Clark, were frequently bedeviled by “Humpty Dumpty, the Hobby Robber” (debuted 1950), whose gimmick was stealing valuable collectibles, but who dressed like a clown for…reasons. And was named Humpty Dumpty. Look, they can’t all be winners.

Meanwhile, one of Green Arrow’s vanishingly rare recurring Golden Age villains was Bull’s-Eye (1946), not to be confused with the much later and better-known Daredevil villain. His day job? Leapo the Clown. Leapo! I don’t know why a dumb name like Humpty Dumpty fills me with rage but Leapo fills me with delight, but there you have it.

The interesting thing about the evil clown trope is that unlike previous tropes we’ve covered, Kid Sidekicks and Reporter Girlfriends, it’s not associated with a particular era. Evil clowns and their ilk continued to be just as popular in the Silver Age as the Golden Age, and at multiple publishers: at DC, the Flash fought the Trickster (debuted 1960), while over at Marvel, Daredevil fought the homicidal Jester (debuted 1968) and pretty much everyone fought the Circus of Crime. At Charlton, Captain Atom fought Punch and Jewelee (1967) and Blue Beetle fought the Madmen (1967). (And then all of them were eventually bought by DC anyway.) The Bronze Age kept up the trend, introducing the first distaff counterpart to the Joker with Duela Dent, the Joker’s Daughter (1976) — though of course Harley Quinn (1992) would eventually become the most famous of his female spinoff characters, and has now received a successor herself in the form of Punchline (2020).

As the decades went on and the Joker became more sadistic, so did the newer evil clowns. Marvel gave us Whiteface in 2005, Pagliacci in 2011, and the Clown in 2013, all of whom indulged in a level of gleeful violence the Golden and Silver Age clowns would never have considered. Except those older clowns were being revised to be darker too, either by retconning their personalities to be more murderous or replacing them with edgier versions — there are two Tricksters, three Jesters, and four Toymen. Today, it’s safe to say that an evil clown showing up in a comic means you’re about to encounter zero whoopee cushions and, like, a lot of dismemberment.

Why do evil clowns persist in comics? Is it because they speak to the inherent unsettling thought of something intended as harmless entertainment for children turned into a threat? Or is it just because the Joker is so damn popular, and the other clowns are echoing that? But then why is the Joker so popular? And we’re back to the primeval fear idea. (Alternately, a truly hilarious number of comics essentially imply that bats and clowns are natural enemies. It’s possible comic book writers don’t know anything about bats.)

I’ll be honest: I could do without this trope. I’m sick to death of the Joker and find most of his copycats annoying, from the Jester to Punchline. (I do like the Trickster, I’ll admit.) Every time a comic or movie (ahem) tries to make the Joker seem profound, I start longing for a good old-fashioned gleefully stupid gimmicky bank robber or super smart gorilla instead. Yeah, yeah, we live in a society, enough already.

But I’m not the only reader out there, and evil clowns have been going strong for so long that clearly I’m not in the majority here. So a round of applause for these murderous merrymakers, I guess! I shake your hands in respect.

Except not actually, because that’s how you get shocked to death by an electric joy buzzer. Nice try, evil clowns!