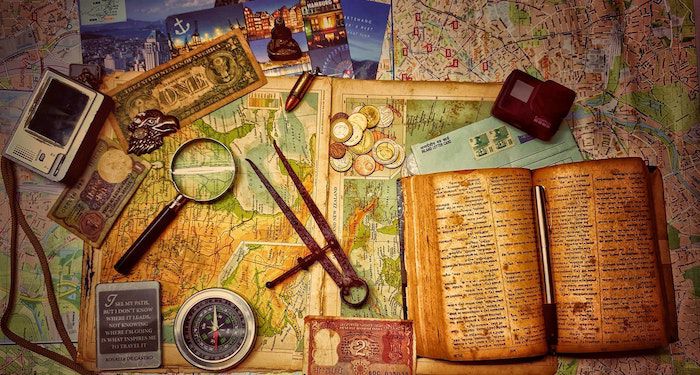 The new treasure hunt puzzle book The Golden Treasure of the Entente Cordiale, released in early April, sounds like something out of an adventure novel itself. The book is available in French and English, and it contains nine different illustrated puzzles as well as riddles. The French and English clues are different, and they lead to two different locations — one in France, one in the UK — where geode crystal key fragments are hidden. Unite the two geodes with the key and you will be able to unlock a cabinet containing the Coffret d’Or: the golden casket that was given to French president Émile Loubet as part of the lead up to the 1904 Entente Cordiale between France and the UK. This golden casket prize is worth €750,000 or roughly $893,000 USD.

The artist Michel Becker bought the golden casket and designed the illustrations himself. It is accompanied by a story, which also contains clues, by Pauline Deysson. The puzzles promise to be challenging, requiring both logical deductions and research. Becker also illustrated the 1993 treasure hunt book On the Trail of the Golden Owl, which has a prize that has yet to be claimed.

Michel is an artist. He does things that some won’t understand but which amuse him. He doesn’t hope to make any money from this operation, but at least he hopes to break even. If people are passionate about the adventure, he will have achieved what he wanted.

If you want to get started, you will have to make a small investment. You’ll need the book of course, which is € 24.90/$30 USD, but also a map for € 17.95/$21, and an adventurer’s notebook for € 4.95/$6. But that set will only give you the clues and puzzles to get to one location: to find both parts of the key, you’d need to double that to get the French and English versions (and be able to read both). There’s also an optional subscription that gives you access to Q&As.

Of course, even for the most intrepid adventurers, there is a bit of a hiccup in this plan: even if you solve all the puzzles, it’s unlikely that those outside of the UK or France will be able to travel there to unearth those geode key fragments any time soon. That isn’t a dealbreaker, though: the vast majority of the puzzles and riddles can be decoded from anywhere, so you’ll just have to team up with someone in the UK and/or France for that final step. It’s much more likely that this will be solved by a team, given the complexity of the puzzles and the size of the prize.

The Entente Cordiale casket is valuable not just because it is a beautiful (and golden) work of art, but also because of its historical significance. It marks a significant milestone in the relationship between the UK and France, and that can be seen in all of the details included on it, such as the crossed UK and French flags as well as the small porcelain plaques of landmarks. The top depicts a figure representing Peace adorning France and the UK with laurel crowns.

The hunt has only just begun, so your guess is as good as anyone’s. For an idea of what to expect, below is a Becker illustration from an earlier book. Good luck to the treasure hunters and puzzlers! I hope this one is found quicker than the Golden Owl!