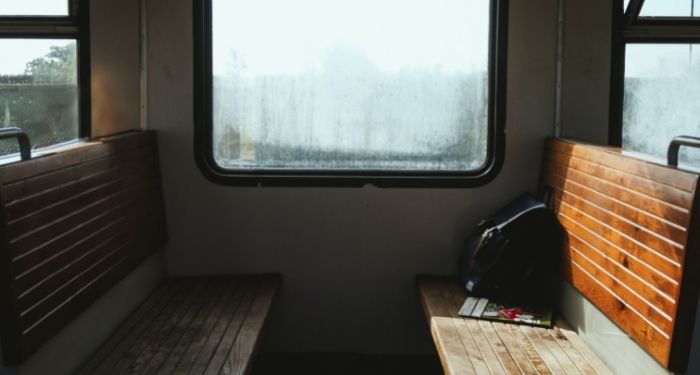 I grew up in Los Angeles, which is not exactly known for its public transportation. My first time on a train wasn’t very romantic, but what it lacked in romance it more than made up for in adventure. The first time I was on a train was in my motherland: India. And yes, everything you’ve heard about Indian trains being hectic, confusing, and overcrowded is absolutely correct. I honestly don’t even remember how my family found our cabins or even got all of our luggage on before the train screeched to a start.

It was a funny conversation with my classmates once I got back to California. Their eyes were wide and amazed. You were on a train? Apparently it wasn’t cool to read about the Hogwarts Express, but it was cool to sleep on a train cot in India watching the countryside whiz past and eating chaat handed to me through the window by a vendor while headed to Rajasthan (actually, it was cool).

Trains are incredible because its passengers either forget about them entirely or have a moment or two immortalized in their memories. But trains themselves are liminal. The term’s Latin roots come from “limen,” which roughly translates to “threshold.” As such, a liminal space is a transition point from what has happened to what will happen next. In literature, this can be tricky to relay, and trains make for a perfect metaphor when authors want to show characters at this transition point. I can’t tell you how many Hollywood (and Bollywood) movies I’ve watched with characters staring forlornly out of a train window after being dumped.

In “Of Other Spaces: Utopias and Heterotopias,” Michel Foucault says, “[A] train is an extraordinary bundle of relations because it is something through which one goes, it is also something by means of which one can go from one point to another, and then it is also something that goes by.” Of all the liminal spaces, a train is unique. The cabin itself is the same, but it is literally the vehicle propelling passengers to destinations old and new, making it the perfect place for contemplation and transition. In an odd way, even though trains are leading its passengers to sometimes unknown places, they themselves are supposed to be safe spaces.

I recently listened to the audiobook of Sylvia Plath’s Mary Ventura and the Ninth Kingdom, which takes place almost entirely on a train. In the story, young Mary’s parents send her off on a train journey to the mysterious Ninth Kingdom. When the train begins moving, Mary observes that its wheels sound like “guilt, and guilt, and guilt.” Despite asking everyone, Mary can’t figure out what the Ninth Kingdom is or where it is located. As I kept reading, I couldn’t help but wonder how the train felt like purgatory for a young woman headed to the unknown with no direction, despite being “on track.” It’s a heck of a metaphor for a millennial like myself who was always on track but confused the whole time.

If Plath’s story had taken place in a car, I’m not sure if the message would’ve gotten across. Cars force their passengers to take charge of the route and metaphorically, their destinies. Trains are more about trust. You buy a ticket and trust the conductor to get your there. That contract frees up space in a character’s mind to worry about aforementioned heartbreak.

Perhaps one of the most famous books set on a train is none other than Murder on the Orient Express by Agatha Christie. In the book, millionaire Samuel Edward Ratchett has been stabbed to death, and it’s up to Hercule Poirot to find the murderer, who is most definitely on the train. In this book, the train felt less like purgatory and more like a pathway to understanding, despite being stopped in its tracks by a snowdrift. In this book, the liminal space of the train has an odd sense of permanence, maybe because it was stopped in its track or maybe because Poirot, by nature of his job, kept the train still in time with his investigation. It’s interesting because despite being stopped in a state of permanence, we know that the train will eventually revert back to its liminality.

Plath was also taking advantage of the inherent romanticism associated with European train travel and subverting it for readers. That contract I mentioned earlier? Out the window. No doubt that iconic story wouldn’t be the same if it didn’t take place on the train.

I think back to that young girl who was wide eyed on a train in India. I can’t say that I was at a transition point in my life. In fact, things were going pretty well and, dare I say, normal? My transition point wouldn’t occur until I started high school, so for me, trains bring me back to that time when I was in the 3rd grade, when life seemed so innocent.

I’m more pessimistic now, but trains transition me back to that time. Reading about them in books does the same, but I get to see how characters act in this liminal space and understand that everyone is on some sort of journey.