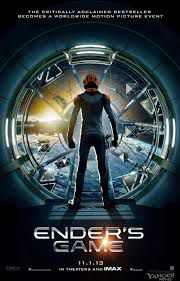 I have not done a trailer rundown in FOREVER AGES. Now seemed like a nice time to bring the feature back because 1.) Great Gatsby is releasing, like, now, and its trailer served as joke fodder for the Inaugural Trailer Rundown and 2.) The Ender’s Game trailer just came out, so all the duh in the world of course we have to run it down!

:17- Quick-cuts of space-planes dive-bombing and close-ups of frightened helmeted pilots and human eyeballs playing over Harrison Ford reading from the Stock Military Soundbites script and I don’t want to be The Grinch Who Stole The Ender’s Game Trailer but so far this movie feels like it was made in 1995 RIGHT in between Water World and Independence Day.

:22- Stock shot of sun peeking over the edge of Earth from space, that makes everything better, just kidding, it doesn’t.

:24- Shot of Harrison Ford looking like he woke up two hours before he wanted to.

:26- Summit Entertainment logo waving its arms frantically screaming “We’re SO MUCH MORE than the Twilight franchise. Pay NO ATTENTION to the boring vampires behind the curtain!”

:36- We finally get a shot of the kid space cadets, but it’s just their legs climbing stairs, boring, I fell asleep typing this sentence. I think I’m supposed to be like “Wow, kids in space school!” But instead I’m like “Wait, their school uniform is medieval knight’s armor and DayGlo skateboarding knee pads? During what PTA meeting was THAT approved?”

:45- We finally get inside the Battle Room! And it is… not as cool as it was inside my imagination when I read the book in high school. I kind of pictured the Battle Room in 2001: Space Odyssey white. Hey, can Stanley Kubrick be resurrected and can his zombie redirect this movie? He can feast on the brains of non-union extras! And if he’s still hungry after that, interns!

I guess I’m being a little judgey, considering this is about two seconds of footage. Being underwhelmed by the entertainment industry gives me low blood sugar.

:50- Hot damn, this trailer is attention deficit. I just want to give this trailer its Ritalin already! It can not stay on an image for longer than .000001 seconds. Which is probably why I’m having a hard time investing in the story/characters/ idea of spending fifteen bucks to see this in movie theaters.

:58- So far we have gotten SO MUCH Harrison Ford and almost NO Ender. I just IMDb’d Asa Butterfield, he was Hugo in Hugo (which I didn’t see) and Nazi Boy in That Holocaust Movie About Pajamas. I have no opinions. Obviously a first for this post. Also, my life.

1:00- We finally get a shot of the kids! Why isn’t this trailer ALL shots of the kids? Kids in Space is the WHOLE POINT of Ender’s Game.

1:01: We also finally get a shot of Ben Kingsley wearing Tom Hanks’ makeup from the post-apocalyptic Hawaii part of Cloud Atlas. I start having faith again

1:10- Asa Butterfield is kind of hot in an infant-faced kind of way. I’m ten years too old for him, I do not want to be thinking “he is hot” thoughts, quick, internet, fetch me GIFs of Robert Downey Jr. being an asshole to everyone who cares about him in Iron Man 3.

1:20- Now we find out that Hailee Steinfeld and Viola Davis are also in this movie. Viola Davis says her “You really don’t see them as children, do you?” line with SUCH gravitas, you can tell she’s developed this incredibly rich Lee Strasberg-y inner life for this character that probably has ALL the boring and obvious lines in the movie. God love her.

1:36- Lots of half-second clips of things I don’t care about. You guys, I was so much more into watching the Catching Fire trailer. To be fair, that trailer had lots of hairstyles I wanted to copy.

1:50- There’s an explosion (which would be cool if I was a French child in 1902 seeing a movie for the first time) and then the title flashes in a font that should be cooler.

1:58- Wait, we went that ENTIRE trailer without getting to hang out with Ender’s sociopath brother Peter? That’s like my favorite part of the book! If that subplot gets minimized/excised from the movie, I’m going to bite Summit Films’ face off.

What did you guys think of the trailer? I hope you guys liked it better than I did. Just, in general, I hope you’re all more open-hearted and generous people than I am who are more easily entertained by the cinema and less inclined to want to ask for your money back after 93% of the movies you see.