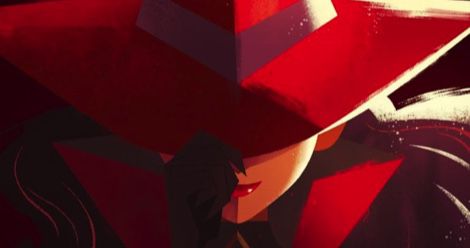 “We’re on the case, and we’re chasing her through history!”

I have memories of looking over my brother’s shoulder as he navigates computer games.

Netflix has released their trailer for Carmen Sandiego, a reboot of a popular franchise aiming to educate children about geography, history, vocabulary, and math. The show will premiere on January 18, and promises a sympathetic protagonist.

Carmen Sandiego is a Broderbund franchise, where the player must use their brains to chase her across the globe, through time, or even through various villain hideouts. In addition to seventeen games released by Broderbund and the Learning Company, there were several game shows, and even spinoff You Are the Detective books.

The game shows were on PBS, where kids could put their knowledge to the test and win prizes if they had enough stamina to run around and chase Carmen.

Big request to Broderbund: PLEASE update the drivers and rerelease the games on Steam, or on an available platform for PC! I can only play the CD-Roms on an old computer, because the games don’t work on the newer ones. My friends have been commenting on how they love the dialogue, puns, animation and appropriate music for each case in Where in Time, and I’d love for them to have the chance to play.

Netflix Carmen appears different. Rather than starting at ACME and outsmarting the heroes, she starts at VILE and defects when she realizes that her classmates and teachers will sacrifice innocent lives for their goals. Her form of defecting, however, involves stealing the objects that VILE wants and stepping ahead of the law. This seems to be better than cutting a deal with ACME and becoming an agent for them, apparently, and she still steals.

Netflix Carmen has standards. She says she wants to steal the things that VILE wants so that they won’t hurt anyone. This is interesting, because Carmen in the games has no such standards. You could argue that once or twice she wanted to reveal hidden treasures to put them in museums. She would be fine with indirectly causing moral hazards with her theft. In Where in Time is Carmen Sandiego, for example, she tells her henchman to steal the Domesday Book from William the Conqueror, which nearly leads to the Saxons laying siege to his castle and the linear timestream getting messed up. The Chief, played by the late Lynne Thigpen RIP, confirms that Carmen steals for the thrill of it, because she used to be an ACME agent and found catching ordinary crooks to be too boring. She switched sides merely to enjoy the chase. Carmen Sandiego: Word Detective takes it a step further when Carmen plans to unleash a machine that will destroy all spoken language, and tests out the machine on captured Good Guides. The moral hazard is high, and her henchmen will attempt to attack violently if they catch you in their hideouts.

That’s the other interesting change: Carmen seems to be more of a loner in this series. She’s a young girl who doesn’t want to make friends, though she has a handful of allies. In the games, Carmen practically owned her henchmen’s loyalty, and she repaid it by busting them out of jail when she could. To be fair, she also ran VILE and is implied to have founded it. In the Netflix series, VILE existed before Carmen, and at best she’d be a henchman.

These Changes are Good

Note that if we want an animated show about Carmen, we can’t have one where she’s a silhouetted figure in red stealing for the funsies and is the protagonist. Frank Abegnale could do that and look cool, but he had the charisma to steal, and Leonardo DiCaprio in the film Catch Me If You Can could be easily charismatic. The guys could ignore the moral hazard because they were in PG-13 and R-rated films. In a kid’s show, you don’t want to show jerk behavior and justify it under the “cool” rule. Kids may emulate the jerk example, so there needs to be a reason for characters to engage in moral ambiguity.

When we chase Carmen in the games, we pursue a criminal. Period. Neither Carmen nor her henchmen make excuses or explain away what they do. Carmen will taunt you, harangue the Chief, and even make the games easier by leaving relevant clues. Carmen needs a stronger motivation than “outsmarting ACME.”

The Netflix Carmen flips the script. Can we root for a thief who’s an adrenaline junkie? The obvious answer is no. And maybe it’d be different if this were a PG-13 film or a live-action adventures series, because adult media allows for moral ambiguity. The motive has to change. In Carmen’s case, she wants to stop VILE in their tracks before they kill people.

The other thing is Carmen does the stealing herself; she doesn’t delegate. This places the onus of responsibility on her. We admire her a bit more for it, because there is no lower-deck crook to take the blame if she fails. Both the heroes and villains hunt for her. She has her reasons for not allying with the ACME agents and Interpol cops on her trail. We’ll find out when we see the show.

Hopes for the Show

I want a good story. We need a compelling reason to root for Carmen, and to fear her antagonists. And I want all the nostalgia to go into this story. Carmen was a blessing to us ’90s kids who were only allowed to play educational video games.

Also, I want to see spinoff comics and the franchise revived, because we need more of these tales. Carmen is amazing, and we need more Carmen games with compelling narratives and quests, which do not judge us by how much fuel or time we use.

Steal our hearts, Carmen. Then let us chase you to the ends of the Earth.