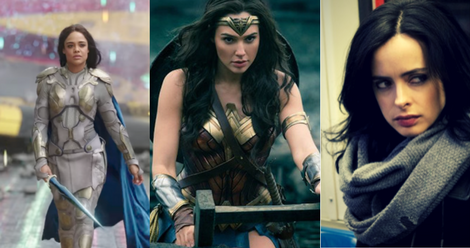 Competitive sports, science fiction, stand-up comedy, superheroes—these are just some of the things toxic masculinity has ruined for me at one point or another in my life. Superhero comics and movies have perhaps been the biggest loss among the lot.

Until the age of 22, I harboured an inexplicable hatred for superheroes in any form; I’d never read a single comic, and the only movies I’d watched were Christopher Nolan’s Batman trilogy for a Shakespeare class in undergrad, because the professor wanted to show us the Joker as an example of Iago’s “motiveless malignity.” I thought they were clever in parts, and I appreciated some aesthetic and visual elements, but I didn’t really enjoy them. Now, before you gather some bros to come over and explain the absolute creative genius of Nolan’s movies to me, please save your breath. I’ve heard it all before.

Up to the age of 15, superhero movies and comics did not have a presence in my life. I knew they existed, but I was never interested. Maybe I’d never looked in the right direction. Perhaps it was the fact there were just never any women, and never any characters who seemed relatable, funny, or fun. I’m not entirely sure why I was never attracted to the genre. And then came a shifting point which tilted the balance further.

In grade 10, when The Dark Knight released, a loud, dominating group of “cool” boys in my class got disproportionately excited. There was a small bulletin board beside the chalkboard at the front of our classroom, which displayed timetables, schedules, and a list of all our birthdays. These boys decided to tear all of it down one day in an act of rebellion and display of aforementioned coolness, and pinned up a huge poster of Christian Bale as Batman instead.

There was cackling, whoops of joy at somehow having bested our exhausted teacher, and an ugly display of what I now understand as the culture of toxic masculinity. I cannot speak for all my female classmates, but this further turned me off superhero movies to a great degree. All I associated them with from that point onward was unnecessary violence and the absolute demise of anything that might be considered weak or feminine. In my mind, it became an exclusive space where masculinity reigned supreme. It wasn’t for me.

This took some years to change.

While I was studying for my Master’s in the UK, I attended a screening of Andrew Garfield’s The Amazing Spider-man in order to spend time with my new flatmates: two girls who were superhero fans. I was pleasantly surprised at myself for not hating it. It was just so different from what I expected and what Nolan had previously impressed upon me. Six months later, these flatmates were now my friends and were very excited about the new Avengers movie. They made me stream the first part online and then go to the theatre to watch Age of Ultron. Again, I did not hate either. I was curious, especially about Hulk and how the character deals with masculinity and violence, and watched some more old Marvel movies, thus marking the beginning of my love for superheroes.

Fast forward to 2017. In the last 3-ish years, I’ve watched every DC and Marvel movie and TV show released (save Doctor Strange, because meh and Iron Fist, because no) and liked and loved most of them. I’ve bought and read comics with female superheroes and leads, a lot of which I have discovered through Book Riot. I’ve been pleasantly surprised by the great characters and stories that have been created. I have loved Deadpool, Wonder Woman, Spider-Man: Homecoming, and Thor: Ragnarok. LEGO Batman and Jessica Jones were landmarks in the diminishing of the shadow that toxic masculinity had cast over my general impression of superheroes. Batman v Superman threw a slight spanner in the works, but I got over it.

It’s not as if toxic masculinity has disappeared outright from the comics world; it continues to permeate through superhero comic books and movies, as Book Riot contributor Jessica Plummer outlines here. I just think that it helped to surround myself with people and platforms where good conversation takes places about comics, and calling out the bad is just as important as appreciating the good.

As a year of genuine, inclusive, important superhero movies comes to an end, along comes Justice League. The initial teaser-trailer had sufficient action (and let’s be honest, Aquaman) to keep me interested. As more promotional material released, I thought to myself that I would watch it for Wonder Woman, despite knowing that the movie would be average at best. However, some disappointing things have recently happened because of which I am now hesitating in giving it my money.

#1 Jason Momoa being a disappointing human being

a horrific clip of jason momoa saying he loved working on #gameofthrones bc he “got to rape beautiful women.” men are trash. pic.twitter.com/K2RBmsWEt6

#2 men being disappointing in general

In case you wonder: Here’s a picture of how the Amazons looked in Wonder Woman…next to pic how they look in Justice League. First designed by Lindy Hemming, second by Michael Wilkinson.

I can bear with ups and downs, and having to skip some problematic movies, but in the story of my love-hate relationship with superhero comics and movies, I hope we never come full circle and give up on them completely. I’ve quite enjoyed welling up at Wonder Woman, Jessica Jones and most recently, Valkyrie, being strong and amazingly badass.

To conclude with all the eloquence of Wonder Woman: