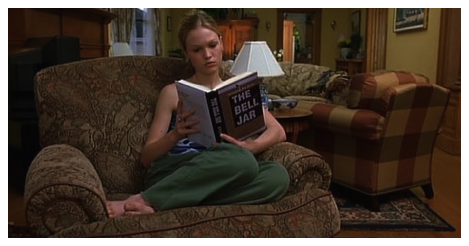 In the seventh grade, we watched the movie John Tucker Must Die at every sleepover. Every. Single. One. Not only did I have the movie pretty much memorized, but eventually I could actually start to see the acting. You know, the strain in the eyes, the calculations behind gestures. At any rate, one of my favorite lines in that movie is when Penn Badgley’s character says to his brother (the infamous John Tucker) that he shouldn’t pursue Brittany Snow’s character (I can’t remember their fictional names.) Why? “I don’t know, man, she’s deep. She listens to Elvis Costello, she reads Dave Eggers.”

It is hard to determine where in Kate’s (Kate! That was her name) busy schedule planning  to ruin John Tucker’s life she has time to read. But when she does, it’s Dave Eggers. I am tickled by that, as I am tickled by all fictional characters who love books as much as I do. A lot of the movies and television shows I loved growing up involved book-loving girls (and occasionally boys, but mostly girls), and I was always interested in what, specifically, they were reading. Who made the Dave Eggers decision, for example? That question will probably haunt me as long as I live (or at least as long as it takes for me to forget every detail of John Tucker Must Die – nine years hasn’t been enough time).

In honor of Kate, I’ve made up a list of my favorite onscreen bookworms (that weren’t book characters first):

Who are your most beloved fictional bookworms?