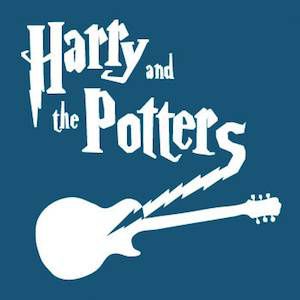 Every once in a while, it becomes necessary to return to Hogwarts. A few months ago, I borrowed the audiobooks from a friend and jumped right back into the same sort of obsessive reading that I did five and ten years ago (late night Wikipedia article-reading trying to make sense of wizard currency, frustrated texts to friends about how Ron didn’t used to be this annoying, etc.). Unfortunately, I wasn’t able to read about Harry every moment of every day, so to fill those gaps, I turned to wizard rock.

Wizard rock, or wrock, was born when a band scheduled to perform in Paul and Joe Degeorge’s back yard, dropped out. The brothers needed a replacement band, so they formed their own: Harry and the Potters, with one brother acting as Harry (Year 4) and the other as Harry (Year 7). Their performance was a success, and soon they were touring the country. (I saw them in Chicago around the time the eighth movie premiered.) Harry and the Potters grew more popular. They were joined in their wrocking by Draco and the Malfoys, Parseltongue, Ministry of Magic, Swish and Flick, The Whomping Willows, and more. (The band names have to be one of the best things about wizard rock.)

The songs they perform aren’t parodies. They are, for the most part, original songs written from the point of view of a Harry Potter character or someone from the wizarding world. (There are some excellent Harry Potter parody songs. I will not include any here, but I did start my wizard rock research because I was hoping someone had written a Lorde “Love Club” parody called “Slug Club.” Please, internet, take this idea and run with it.)

What I love most about wizard rock isn’t necessarily the quality of the music, but their unbridled enthusiasm for this imaginary world. (According to their profile in Time Magazine, Harry and the Potters’s 2008 tour was called “Unlimited Enthusiasm.”) I mean, really, what’s better than a group of people who are so excited about Harry Potter that they have to sing about it?

So, these are my top five wizard rock songs. Enjoy, and let me know in the comments if I missed out on any of your favorites.

Save Ginny Weasley — Harry and the Potters
[youtube]https://www.youtube.com/watch?v=PafwCn_kOXI[/youtube]

Potions Yesterday — Draco and the Malfoys (I will be humming “except for Snape” for days.)

Welcome To Hogwarts — Tonks and the Aurors (It is absolute headcannon that Tonks was in a girl band and wrote songs with hand claps.)
[youtube]https://www.youtube.com/watch?v=Xw6O_TDGgOs[/youtube]

And Then I Died — The Moaning Myrtles
[youtube]https://www.youtube.com/watch?v=G7lAdX4euLU[/youtube]

Quiet Night on Diagon Alley (the “Closing Time” of the wizarding world)
[youtube]https://www.youtube.com/watch?v=YPiBL_SBQJA[/youtube]

Editor’s note: This post originally contained links to videos done by bands whose members have recently been accused of sexual misconduct, and we were alerted to that fact by a commenter below. Those bands’ videos have been removed and replaced with alternates.