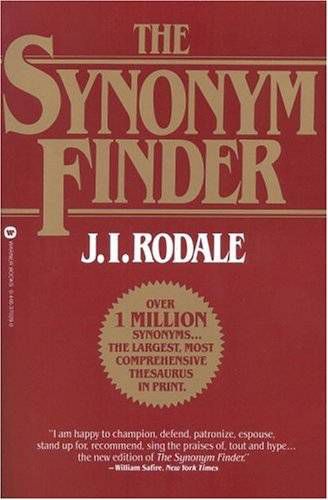 One of my favorite writers, Canadian poet Anne Carson, author of Autobiography of Red, has an awesome word horde. Her verbs are true to the advice they give in writing seminars – muscular. She can move an image in the dead eye of a guinea 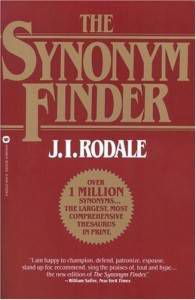 pig. It’s cinematographic. Grisly. Poignant. I love her so much, but I’m not talking about Anne Carson. No. I’m talking about Rodale’s Synonym Finder, one of the tools of the trade I suspect Anne Carson uses, and that any writer worth their salt should use if they are not already.

Writers, like the rest of us, get in ruts. Ours might be habitual – why must I always crave chocolate cake after dinner? Theirs is linguistical. Junot Diaz always sounds like Junot Diaz, whether he is talking about deep space or Rutgers. This is comforting, and a revelation. It’s like getting into a used but awesome Porsche as writer Hank Moody does in the TV show Californication, but sometimes you catch an author using the same phrases, the same verbs, or even the same scenarios like they have a tic. I’m talking to you, dear Geraldine Brooks. In two books, she’s made the heroine suck on the fingers of the antihero. If only she’d had Rodale’s Synonym Finder!

The words I look up in Rodale are the ones that are the dead horses that I beat in my conversation: great, cool, awesome, you betcha, and right on. Instead of saying something is “great,” now I have the opportunity to chose “grand” or “capital,” and I do, though people give me looks. So what, I say. Let’s use this great – oops , I mean colossal – mongrel language of ours and wring every possible nuance out of words.