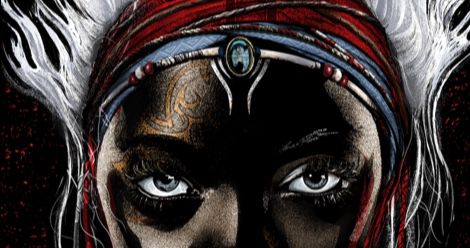 Tomi Adeyemi is a creative writing coach and author of the phenomenal YA novel Children of Blood and Bone. A scholar of English Literature and West African mythology, Tomi’s website has been named by Writer’s Digest as one of the 100 best for writers.

She was kind enough to sit down with Book Riot for a few minutes, amidst panels and signings at SDCC, to talk about Children of Blood and Bone, her experiences as a Nigerian American, and what she’s reading now. 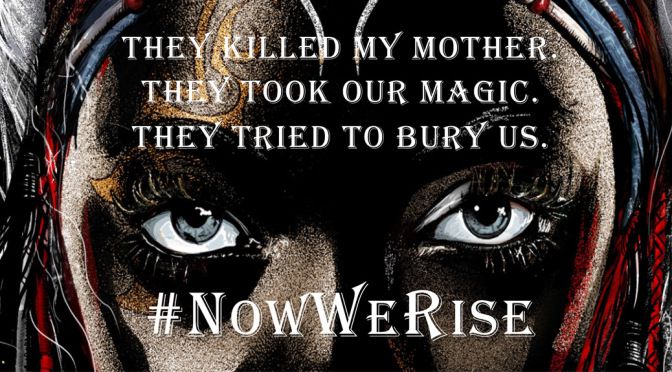 BR: Is Children of Blood and Bone based on a specific historical event or is it more of a historical survey?

TA: I think survey is better because it’s an allegory for the modern black experience. For that, I’m using things that are happening today but also things that happened up to 30 years ago. Every obstacle ties to a real event or a real series of events…there’s a lot to pull from.

BR: When authors who are not of color try to include characters of color, or cultures of color, they tend to create a monolith. Something a couple of my friends and I noticed watching Luke Cage this season is that they were very nuanced about representing the American Black experience as more than one thing: people from Jamaica, people who just came, people who have been here for a long time. It seems like that was something that was important in Children of Blood and Bone. How did you go about parsing what was most important to you?

TA: People say you’ve got to write honestly and that sounds great but also, what does that mean? I think part of that is knowing there are some things black people go through that are universal and those things are how the world shapes you…if you’re in a racist encounter, they’re not going to say, “Oh, you’re Jamaican, oh, you’re Nigerian; oh, you’re full African American; your ancestors were brought here on slave ships.” That’s not what other people see. In the outside world, we have a kind of universal experience but it also changes depending on whether you’ve grown up in predominantly white spaces or predominantly black spaces…

I also look at the household: inside my household, I was Nigerian. Outside my household, I was African American. I met readers the other day who were also Nigerian and asked me if I was going to include Igbo stuff, which is another tribe in Nigeria, because I used a lot of Yoruba stuff, and I said, “Honestly, if I had so much time to research, sure, but I’m not Igbo.” There are universal Nigerian things, like when you do something dumb and your grandmother makes a specific sound, that’s all of us. But the language I use for magic is Yoruba…I can’t do Igbo or Hausa because I don’t know anything about that…

It’s about knowing what you do know and what you don’t know and also knowing that if everyone wrote about the same thing, it would still be different. Half of The Hate U Give maybe I could have written because Starr in a predominantly white school, that was my life. But Starr at home, that was not my life. Same with Black Panther. Only Ryan Coogler would have started it with boys playing basketball outside a complex. Ava DuVernay wouldn’t have started it like that…

I think people put so much pressure on making a monolithic representation but when you look at the opposite…when you look at one movie with white people…there’s permission to tell a bunch of different stories. I think it’s more about getting into that and realizing that not everything is going to be “all Africans” or “all Nigerians” or “all black people;” this is one story. This is one person or character. You’re going to learn things but you’re not going to learn everything because I (the writer) don’t know everything. It’s impossible to learn everything and a story about everything wouldn’t do well because people connect with individual humans.

BR: There’s a lot of guilt in this book of various kinds. Guilt of children and parents, siblings, romantic guilt…why do you think guilt motivates people to become heroes?

TA: I don’t know if this is other people or just me but I think “you push me and…” We were walking here and this girl, who was white, hands me her trash and goes, “Thank you, have a nice day.” And I was like, “I’m going to fight you but obviously I’m not because I have to go to my signing.” But if she had done that to my sister, or done that to my mom, or one of my friends…I would be late to my signing, we would have some words. I think a lot of times, something can happen to you (and you deal with it) but when someone does something to someone you care about you think, “Okay, you can talk trash to me but you cannot talk trash to someone I love, that I will not allow.” Guilt is one way to phrase it but I think it’s also being motivated by the other…by “maybe I don’t want to do this for myself but I want to do it for my dad.” And, “maybe I’m too scared…” Amari would never do what she did for herself but when something happened to her person…she had to do something. What’s actually driving it is stepping in for someone else.

BR: Is that part of the reason it’s important for Zélie and Inan to come together but then get pushed apart again?

TA: I think it’s what you want but you can’t always have what you want. Sometimes…my whole theory on romance in general: two broken people can’t make a whole. They’re (Zélie and Inan) broken in different ways. It’s not like you can’t jam it together like puzzle pieces that don’t fit—you can make them fit together for a little but but until you fix the hole inside yourself, you can’t…I think it’s more about that than “they have to come together.” I have a whole fan fiction in my head about what happens if he doesn’t fuck up and everything goes well. I would love that, I would love to tell that story. But that’s not actually what would happen.

BR: Another thing I noticed is that female anger, which is very empowering, was a huge part of this book. Why did it feel like now was the time to tell that story?

TA: It’s not even about now being the time. It’s just who I am. I was ready to shove the trash back in her (the aforementioned woman) hands and say, “Of all the thousands of people walking around here, I don’t know why I was the one you thought you should hand your trash to.” But that’s not what’s going to happen. I got anger and I got rage and I try to channel it into good things…but I don’t think I could have any character who didn’t have that because that’s who I am and you have pieces of you in every character. What happens in the story, there’s no way you’re not going to be angry about that, just like what’s happening in the world.

BR: Totally changing gears: the mood of the book generally feels like a fantasy but I noticed there were places where it felt like there were modern language or concepts, like the bar and people knowing how viruses work. Is it fantasy, is it post-apocalyptic, does it really matter?

TA: It’s definitely fantasy but I’m not a purist by any means. I’m the opposite of Lord of the Rings. I think you can tell a big adventure but we’re telling it now and it needs to make sense now. What I hate most is not being able to use the word “shit.” There are times when the only response is the world “shit” or the “f” word, but that’s too modern.

BR: Do you have any resources in particular you go to when you’re writing and you need a little push or you’re stuck?

TA: I always like to rewatch my favorite stories if I’m really, really stuck…I think watching a great story reenergizes me to write a great story. When I see something great I think, “Oh! I want to write right now!”

BR: I’m curious as to whether the magi having white hair is mythologically significant or it was just visual and interesting to you?

TA: It’s kind of both. Storm is actually based off the Orisha, but it started for me as a visually interesting way to do it. I wanted to make them stand out, but I wanted to make them stand out with something that wasn’t so far away from it. There are black people with white hair because of age or stress. I have a couple natural ones. I think…when I started it was more psychological. When I described someone who has “skin like the night and hair like snow,” it works. There is also white hair in some of the Orisha too, so it’s a mix.

BR: Another mythology question: do the lilies have any significance?

TA: Honestly, they’re just so beautiful and so black. I had a lot of missions in the book…so much in my life is black is beautiful…I’ve had so many times when people were like, “Oh, you’re pretty for a black girl,” or “I don’t date black girls.” It’s driven into us from a very young age…flowers are very poetic but its so black and so beautiful and because its so black, it makes it so beautiful.

TA: I’m in the beginning of Four Dead Queens by Astrid Scholte, which comes out next year. But I had a panel with Rebecca (Kuang) and I fell in love with her on the panel so what I really want to stop and read is The Poppy War. I just read A Very Large Expanse of Sea by Tahereh Mafi and I loved it. It was so strange reading about a different experience but everything feeling so personal. I think that’s the power of the writing and the story. I felt like all of those things were happening to me even though none of those things had happened to me. It was a really beautiful read.

BR: What color would your light saber be?

TA: Probably black. I know Samuel L. Jackson had a purple one and that was pretty sweet but I think…black. I thought white but that’s too heroish…I’m feeling the dark saber.

Tomi Adeyemei’s debut novel, Children of Blood and Bone, book one of The Legacy of the Orisha, is available now and has been optioned for film. Book two in the series, Children of Virtue and Vengeance, is due out March 5th, 2019.