Samurai Jack aired when I was a kid, but at a time when it didn’t seem interesting. We also didn’t have cable. By the time I wanted to watch, it was already cancelled. It remained off the air until 2017, when the last season aired.  A comic series also sold, tying in with the show.

The story follows a samurai who, when facing the demon Aku, ends up flung into a future where  Aku reigns supreme. Jack has to return to the past to save this bleak future. He travels the desolate dystopia for five seasons. While seeking time portals, he saves lives, rights wrong, and brings hope.

Please do not read further if you wish to avoid spoilers. You have been duly warned.

What went Right in season five

Samurai Jack had two things going for it: its villains and its theme. Jack by season five has roamed this world for fifty years. He never ages, but never finds a time portal. He struggles with failing his loved ones, by never finding a way to return. Despair nibbles at him.  He believes he’s not doing enough. The world has to prove him wrong, by showing his allies and friends coming to his rescue. If he wins, by returning to the past, they will cease to exist in a better future. They come anyway, because the hope Jack provides makes that sacrifice worthwhile.

The other great thing about season five are the villains. We get the musical Scaramouche, a deadly robot assassin that sings as he kills. Aku struggles with despair about destroying Jack, whom he’s accidentally condemned to eternal youth.  The demon fears Jack’s sword, which can slay him. So he hides out in a fortress where only the brave and stupid approach.

While Jack roams the Earth in despair, an Aku priestess bears seven daughters. She and her women train the girls from a young age to fight and kill Jack. The girls are trained to not rescue each other, and curious Ashi gets beaten for merely looking outside.

We have seven girls, unleashed on this world, believing Jack is evil. They’ve never been outside, or known a different point of view. You’d naturally expect they would add more to the story as a team and as sisters.

We get none of this. Before we get to episode four, Jack has killed most of the girls. He has no choice, since they outnumber him seven to one, and he can’t reason with them. The decision isn’t an easy one, since he’s never taken a human life before. He manages to capture Ashi, in the hopes of talking sense into her. After a beast swallows them, and Jack shows mercy to a ladybug, she abandons her murderous quest.Character development ensues.

Ashi realizes that her mother lied to her. She decides to seek the truth, and she can only trust Jack. Jack shows her that Aku is the evil one.  He tells her a bedtime story about the stars, and takes her on a ride with a sea dragon. She starts to smile more.

After a while, the pair separate. Ashi reveals that she’s hated her abusive childhood, and seeing other children hurt. She couldn’t mourn her sisters, or show weakness, and she lashes out with resentment. Ashi in private adores nature, and innocent creatures. She saves Jack from committing seppuku, and from her mother. The very tool the Priestess crafted is turned against her. Ashi avenges her sisters and their abusive childhood by killing her mother, and ending that evil. 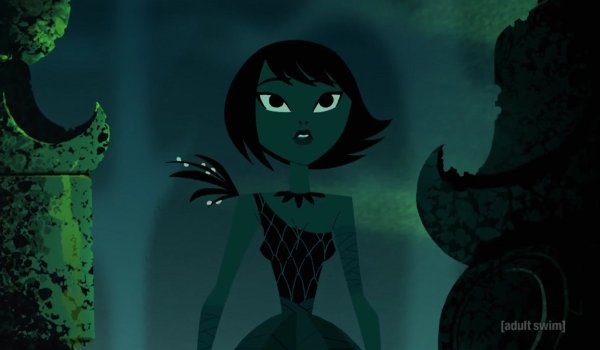 After all of this, Jack decides he no longer wants to be alone. He prepares to fight Aku, and kisses Ashi after realizing he loves her. Ashi reciprocates, and insists on facing Aku with Jack. This backfires: Aku finds out he can turn Ashi into a demon, and uses her as a pawn against Jack.  I only have one response:

Jack is older than fifty, while Ashi at youngest is in her twenties. He has experienced more pain and suffering than most people have; Ashi is still learning about Aku’s reign. He killed her sisters, and chained her briefly. This isn’t an equal relationship, and it reduces Ashi to damsel status when Aku uses her against Jack. Any romantic relationships between them strikes the “ick” factor, especially since Jack was her grumpy Obi Wan before.

Ashi is not a pawn. She is not a prize to be won; she has depths, and a character arc. To reduce her to a love interest and an obstacle is repeating her sisters’ deaths. They die to fuel Jack’s angst, and that’s it. Any of them could have taken Ashi’s place, having received no development. The writers stuff her in the fridge after developing her. She only fought Aku’s possession after Jack confesses that he loves her.

Ashi ceasing to exist was fine and fair. Jack’s allies and friends from the future also ceased to exist. He paid a price for saving his past, one that everyone else paid. They all knew the risks. I take issue with Aku turning Ashi into a damsel briefly. She deserved more than that in the season finale.

I’m sad at how Samurai Jack ended because the final season started off so well, and ended with a climatic battle that promised thirteen years worth of catharsis. We got an ending, but the ending had a major downside. Was it worth getting an ending? Yes. Did the ending satisfy? Not really.

All we can do is move forward, the way Jack has to move. We can grieve Ashi’s lost potential, and her dead sisters. Jack won’t forget their lives senselessly wasted. Neither will we.