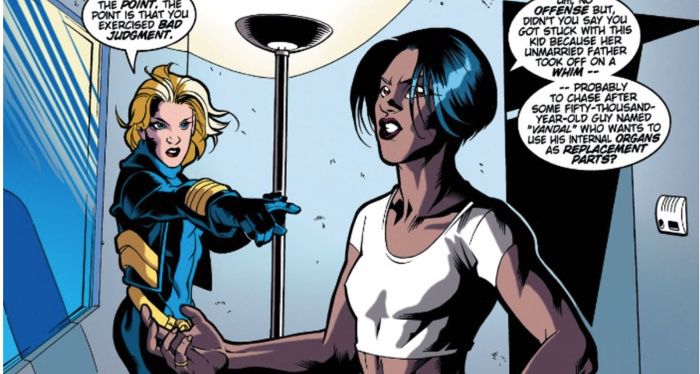 Chanda Madan is one friend the Teen Titans probably wish they could forget. She first appeared in the 1998 Arsenal miniseries, when Black Canary hired her to babysit Lian Harper, Arsenal’s daughter. Canary doesn’t like her at first — she once got *gasp* a parking ticket! — but when Chanda points out that Arsenal isn’t exactly a model of stability and good choices, Canary relents.

I feel like Chanda probably wasn’t meant to be a recurring character. She mainly exists so the readers don’t wonder who is watching the toddler while her dad and…grandmother? godmother? aunt? Arrow family dynamics are confusing…are off beating up Vandal Savage. But recur she did: when Arsenal needed someone to watch Lian after he rejoined the Titans, Chanda was there. She and Lian get along great, right up until this happens.

Okay, backstory time: Lian’s mother is the villain Cheshire, who once nuked the Middle Eastern country of Qurac. Chanda’s family is from Qurac, and they all died in the attack. When Lian confesses Cheshire is her mother, Chanda takes it, uh, bad.

While Chanda’s surprise and upset is understandable, she proceeds to yell about the murders in front of an already-distressed Lian and then leave Titans Tower with Lian to go back to her apartment. Even granting that she planned to call the Tower to explain things once she got to her apartment (she didn’t — they got sidetracked by Chanda’s roommate), this is not okay. I know Chanda is upset, and since she’s pretty young (she mentions being in school), I’m sure that’s affecting her judgment. But still, Chanda is quite lucky that Arsenal decides to be lenient with her.

I also think it’s hilarious how Black Canary and Arsenal did all this minute, invasive research into Chanda’s background, yet they somehow didn’t think that her family history was relevant. And yes, in Titans #9, Arsenal admits he just didn’t look into that. Nice job, buddy.

In that same issue, Chanda confesses to Arsenal that she knows about Cheshire and that she isn’t sure she can go on babysitting Lian — again, understandable, especially since Arsenal is about to run off on a mission to both stop Cheshire’s latest crime and try to shield her from the full consequences of said crime. During the fight, he very nearly abandons his own teammates to save a mortally wounded Cheshire, so Chanda’s reticence to continue any sort of relationship with him is perfectly reasonable.

Anyway, Chanda does agree to continue watching Lian, who still likes her very much, but her relationship with Arsenal is permanently strained. It all comes to a head in the “Trial of Cheshire” storyline, when Chanda agrees to team up with some Quraci nationals. They want her to use her connection with the Titans to help them enact their grand plan to hire an assassin to murder Cheshire before her trial.

This leads to some drama where Deathstroke the Terminator, having somehow mysteriously found the safehouse where the authorities have stowed Cheshire, tries to kill her. Nightwing, leader of the Titans, takes about two seconds to realize Chanda might be the leaker, but she denies it: when the Quracis’ plan put Lian at risk, Chanda backed out and refused to help them anymore. Still, they know about her and her connection to Lian, so Chanda decides to quit as Lian’s babysitter rather than endanger her any longer. Arsenal then settles on a safer option for Lian’s new nanny: Rose Wilson, Deathstroke’s daughter.

I do genuinely like the relationship between Arsenal and Chanda. Each recognizes that they themselves are flawed, which makes it easier for them to forgive each other when they make mistakes. It’s a shame they didn’t get the chance to develop their relationship further — I would have liked to see Arsenal become more of a mentor to Chanda, maybe teach her healthier means of coping with loss and anger.

Then again, “my boss is irrevocably in love with the mass murderer who nuked my grandparents” is one heck of a dealbreaker. This is probably the only logical way for their story to end.