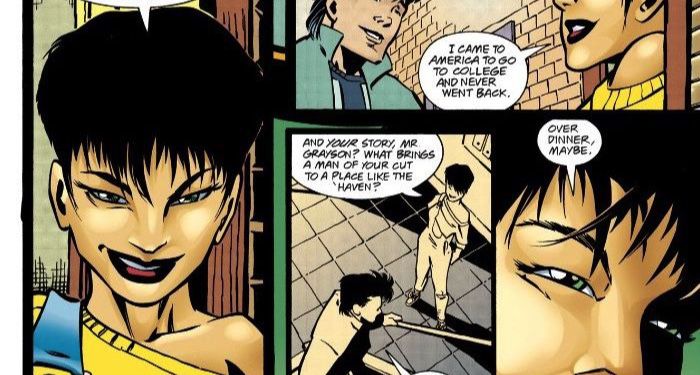 Bridget Clancy started off as a running gag. In early issues of Nightwing, Dick Grayson moved from Gotham City to the neighboring city of Blüdhaven, which is like Gotham but less cheerful. He moved into an apartment building run by a woman with a very sexy Irish accent — and whose face is always hidden behind boxes or under the sink. After spending several issues fantasizing about how his landlady must surely be a smokin’ hot redhead, Dick finds out she’s…Asian. Ha ha?

Whatever romantic or sexual designs Dick had on Clancy (she’s always called Clancy rather than Bridget) vanish the second he actually sees her. I do have to wonder about that — Dick really so shallow and bigoted that he only likes Irish accents when they’re attached to white faces? On the other hand, as we’ll see, the comic is so inconsistent about Dick and Clancy’s relationship that it’s difficult to figure out if this is an example of racial bias or if the comic just got distracted with other topics and forgot to finish developing their relationship for a while.

Fortunately, aside from all this nonsense, Clancy is a fun character in her own right. She’s self-sufficient, handy with a wrench, and has a strong sense of right and wrong: she’ll rent to anyone, including those with criminal records, so long as they have rent money. Still, Dick stands out among her tenants as being especially honorable, and she makes frequent attempts to get to know him better. These attempts are usually scuttled for secret crime-fighting reasons.

The relationship between Dick and Clancy only got more confused from here. In Issue 25, Robin asks if they’re dating, and Nightwing says they’re “just friends.” In the very next issue, they go on what looks suspiciously like a date. Later still, Clancy’s lighting candles all around her apartment, and Dick expresses an interest in kissing her…only to put the moves on his old girlfriend Oracle in Nightwing #36. When Oracle tells him to cool it, he appears to get serious about Clancy and finally kisses her. This lasts for two seconds before Dick decides he’d rather wait for Oracle after all and breaks Clancy’s heart, forcing her to put on a brave face.

Man, what a…well, you know.

Clancy would have other things on her mind soon enough. When she reveals that she always dreamed of going to med school but couldn’t afford it, Dick points her towards a scholarship opportunity…offered by WayneTech. Clancy is accepted and starts going to school.

In my opinion, I don’t think Dick pulled any strings to get Clancy her scholarship. Given how much time he spends trying to assert his independence from Batman and keep his former mentor out of his life, it’s more likely that he just happened to know about the scholarship and that Clancy got in on her own merits.

That said, Dick has been wildly dishonest about who he is, and I don’t just mean the Nightwing stuff. You’d think that, as Bruce Wayne’s ward, he’d have been all over the tabloids for the past decade, yet no one in Blüdhaven seems to have any idea who he is. Dick keeps his identity and wealth a secret even as he uses it to help Clancy on the sly, like when he buys their apartment building to save everyone from eviction.

Dick continues being a neglectful jerk and a half, not sparing Clancy a single thought until she almost electrocutes herself to death while changing a light bulb. Fortunately, the EMT who resuscitates her is super hot and Clancy falls for him instantly, so we don’t have to think about how badly Dick treated her.

After Clancy is carted off to the hospital, she utterly disappears from the comic. For three years. If you want to see her within that gap, you have to turn to other titles, like Robin #96. Here, she is inexplicably the landlady of a swanky Gotham condo — what happened to med school?? — and her name is spelled “Bridgette” for some reason.

This issue was written by the same guy who created her, so either A) this is a mistake of mind-boggling proportions, B) he was just having some fun, or C) Clancy has a twin sister and unimaginative parents.

Sadly, Clancy’s heyday had already passed. She finally turned up in Nightwing again in Issue 91, just long enough to reveal that she’d been at med school in New York. (No word on how things with Hot EMT Guy turned out.) When Dick relocates to New York, he meets up with Clancy, who is now a psychiatrist, and they reconnect for a few issues before she vanishes permanently. It’s a shame: Dick had had a rough couple of years, and the idea of giving him a psychiatrist friend to spill his heart to is a good one. Possibly the only good idea to come out of this comic during the period, frankly.

Look, I love Dick Grayson. But Clancy deserved a way better boyfriend than him. She might get the chance now: earlier this year, she made an appearance in Infinite Frontier, and we know she exists in the Titans TV universe, even if she hasn’t actually shown up. So maybe Clancy will get a new lease on life soon. But hopefully she’ll think twice before leasing to Dick.