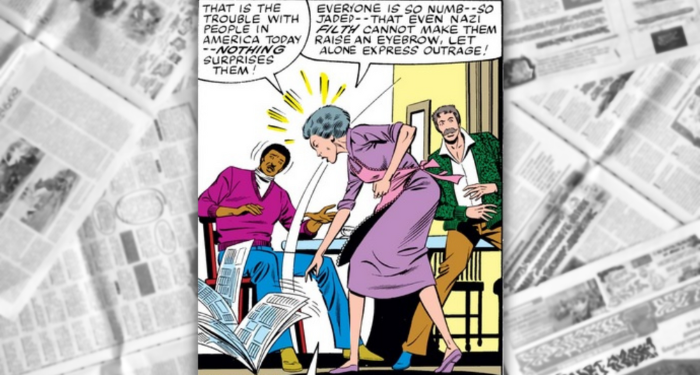 Trigger warnings for WAY more discussion of the Holocaust, Nazism, and antisemitism than I anticipated.

Anna Kapplebaum (sometimes spelled Kappelbaum) grew up in a very happy German Jewish family until she was about 12. That’s when the Nazis took power and imprisoned her family in a concentration camp, where everyone but Anna was killed. Anna herself only survived thanks to a timely rescue by Captain America.

We know all this because Anna infodumps her life story on new neighbor Steve Rogers after inviting him over for dinner. That’s, uh, quite the way to introduce yourself. In her defense, Steve set her off by staring at her tattoo. And he was staring because he recognized her from when he liberated Diebenwald, the (fictional) camp where she was imprisoned.

Steve had just moved to Brooklyn Heights, hoping for a fresh start after his girlfriend’s death. Anna, whom we later find out is the building’s landlord (so you’d think she’d recognize him rather than needing to be introduced as in the panels above), always put effort into making all the tenants feel at home. A later issue describes her as a “self-appointed ‘house-mother'” to the other tenants.

Anna’s big character moment came in Captain America #245, when she encountered the “Butcher of Diebenwald,” the man who killed her family and tormented her in the camp. Obviously, she is extremely angry and even tries to shoot him. Captain America tries to stop her in the most un-Caplike way possible: by saying that killing Nazis is bad.

If he was making this argument based on what he knows of Anna personally — say, that she isn’t a killer and that she’ll be haunted by her actions, however justified — it could make sense. But for Captain America, who spent the war years punching every Nazi he came across and not taking particular care to make sure they lived through the experience, to make a blanket statement that murdering Nazis “will not solve anything” is weird. To put it mildly.

In the end, Anna can’t do it — not because of Cap’s pleading, but because the Butcher remembers her name after claiming he didn’t. It’s implied throughout the issue that he deeply regrets his actions during the war (which doesn’t make it better, obviously), but he is still murdered by a Nazi hunter’s daughter. Whether Cap arrests her or tries to give her a fancy speech, we don’t know.

Another notable moment came in Issue 269, when Anna gets upset over the rise of Neo-Nazis and Steve…scolds her about it?

First, the idea that the Holocaust was a learning experience that should have made the victims better people is abhorrent. It wasn’t homework or a therapy session. It was genocide. It was antisemitism enacted on a wide and violent scale, and quite frankly, anyone who survived it should be allowed to feel however they want about it without some self-righteous gentile getting in their face.

(For a much better, though less explicit, portrayal of this concept, please read Art Spiegelman’s Maus, particularly Part II: And Here My Troubles Began.)

Second, again, that’s a real funny position from a soldier who spent the entire war violently confronting Nazis — and who, in 2021’s Captain America: Infinity Comic #1, told a man in a bar to keep his racist mouth shut or else Captain America would come for him. I’m glad he got over the idea that we should “be unafraid of ideas — however noxious,” at least.

Third, we later learn that Mike (that’s Mr. Mustache in the green jacket) is a member of the Watchdogs, a group of right-wing bigots dedicated to defending America’s “morals.” Clearly, Anna has more reason to be concerned than anyone in that room currently realizes.

We get more Nazi stuff in Captain America #275, when a synagogue is vandalized. Steve is so ignorant he doesn’t know what a Torah is and tries to claim the vandalism is the work of street gangs, not actual Nazis. This doesn’t go down well with Anna. And when Steve’s girlfriend Bernie (also Jewish) announces she’s going to an anti-Nazi rally, Steve begs off, claiming he’s too busy.

This is a man who personally liberated concentration camps and saw the Nazi menace up close, yet he continually dismisses Jewish people’s anger and fear as irrational and overblown. It’s not until his boss makes a bigoted remark that he realizes, oh yeah, antisemitism still exists and he should maybe do something about that.

Aaaand then he quickly decides they shouldn’t have held the rally at all because it gives “free publicity” to “only a handful” of Neo-Nazis. When the rally devolves into violence, he lectures both sides as if they’re equally to blame, even calling the Nazi speaker and a Jewish rock-thrower “two of a kind.”

I know I’m supposed to be talking about Anna Kapplebaum here, but good grief, Cap’s behavior is baffling. He brings up his personal experiences at Diebenwald to try to shame the Nazi speaker, but he somehow can’t understand why Jewish people, including actual Holocaust survivors, would be so upset about the popularity of Neo-Nazis and want to do something about it.

I can see how Cap’s ignorance would make a decent story. No one understands antisemitism and the Holocaust better than Jewish people. This could have been an opportunity for Cap to realize the limits of his experiences and learn how to be a better ally to Anna and Bernie as they cope with and fight back against the antisemitism that has affected and continues to influence their lives.

This is not that story. Also, if you need a refresher on why comparing Jewish people to Nazis is bad, here’s what the World Jewish Congress has to say on that.

Steve moved out of Anna’s building in Captain America #317, but she’d basically already disappeared by then.

Beyond the Holocaust discussions, Anna doesn’t have much to do aside from serving meals and engaging in some light matchmaking between Steve and Bernie. It’s sad, because Anna did manage to move on after the Holocaust: she married, relocated to New York, and even made a kind of peace with her experiences. But the comic takes no interest in any of that. All we learn about her life post-Holocaust is that she got married (but we never learn anything about her husband — is he dead?) and that she is a terrible singer (but we never see her sing).

The more of Anna’s appearances I read, the more I became convinced that she was introduced solely so the creators could talk about Nazi stuff. That’s why I went off on so many tangents about Steve: Anna exists as a receptacle for Captain America’s insensitive speeches, not as a person. And that stinks.

To sum up this very long rant: