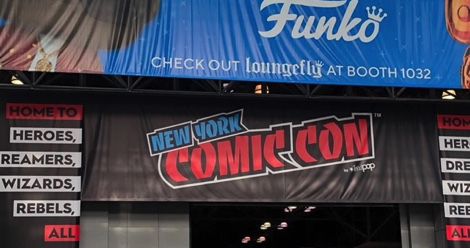 As a relative newbie to comics (I’ve been reading them for less than 3 years), this year was the first year I was able to go to New York Comic Con (NYCC). I decided to cosplay as Jessica Jones, I had an interview with Marguerite Bennett (DC Bombshells) set up, and was ready to go…but of course, the best laid plans, yada yada—I ended up having to cancel my interview because of time constraints due to my toddler. Despite the unfortunate change of plans, I threw on a leather jacket, gray scarf, fingerless gloves, and ripped jeans and headed to NY. 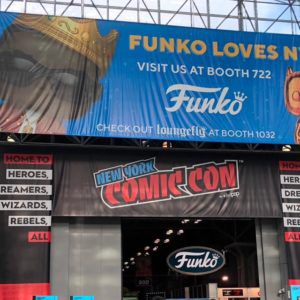 I had several panels marked on my schedule in the NYCC app, but once I got to the Javits Center, all of that flew out of my head and I soaked up the atmosphere. So much geeky goodness! So many friendly people! The press room! Walking around the show floor, my first stop was Boom! comics. They put out some of my favorites, like Lumberjanes, Heavy Vinyl (formerly Hi-Fi Fight Club), and Slam! I picked up the second TPB of Slam! and went on my way. Image (who puts out the amazing Bitch Planet) was another stop of mine, followed by Quirk Books (Geekerella, Paperback Crush), Del Rey books (allllll the Star Wars books), and Chronicle Books, where I was able to snag the super beautiful book Star Wars: Women of the Galaxy and a print of Princess Leia by the amazing Jen Bartel.

The thing that struck me the most about NYCC was the feeling of ease and community I felt there—and maybe it was just first-time childish adoration of the event, or maybe it’s something more real, but I felt a sense of community of sorts, like I had finally found my people. Everyone was so excited about whatever comics or fandoms they chose, and geeking out about their faves while hopefully discovering something new. I loved seeing the cosplay—although there were fewer people cosplaying than I had expected (perhaps this was because I went on Thursday, the first day). I was hoping to see lots of Star Wars people, but the only Leia I saw was a little girl, along with a lone Kylo Ren, a sole Luke Skywalker, and a random bounty hunter carrying a sign that said “Make the Galactic Empire Great Again.” 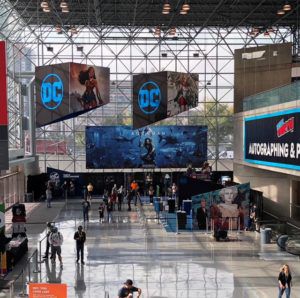 Given that it was my first time at NYCC, I made a few missteps, and there were some things that I will do differently the next time I go to a con. Here are some of the ones that stood out for me.

Bring a cheap, easily packable, durable tote bag. Even if you vow to not buy anything (HA!), bring it, just in case. There are lots of samples and tzotchkes you’ll pick up, and it’s a good place to put bottles of water or snacks. There was a booth giving out those recycled plastic totes (they were huge), and clearly, everyone coveted them as much as me, and by the time I actually found the booth, they were out of them. I had a messenger bag with me, but I quickly realized that it would be past capacity soon, so I ended up buying a tote from a booth—but I could have saved that expense if I’d brought my own.

Bring snacks. If they let you bring them in, pack a bottle (or two) of water, and easily eatable snacks: granola bars, peanut butter crackers, fruit snacks, nuts, an apple, etc. Con food is super pricey (a 20 oz bottle was something like $4.25, I think?) and the lines can be dreadfully long. All that walking around builds up an appetite, and frequent snacking will help give you the energy you need and stop you from getting hangry at the crowds. 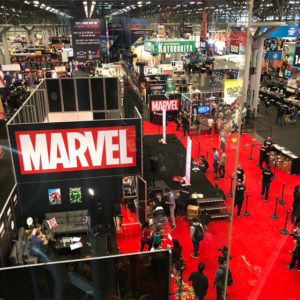 This was before it got busy.

Wear comfortable shoes. I cannot stress this enough. Think about your shoe options while planning your cosplay. I settled on my favorite pair of hot pink broken-in Docs. Not quite what Jessica Jones would have worn, but they were sturdy, got me through the con, and it wasn’t until I was walking to the train station after an entire day of being on my feet that I noticed my feet were tired. Just in case, though, bring some band-aids or moleskin, in case you have to do some quick fixes.

If you have one, bring a portable phone charger. You’ll probably be pulling your phone out all day—to text friends about meeting up, to take countless pictures, to take notes on things or comics you’ll pick up later, to check in at home, or to check the con app. Depending on your phone, that can drain your battery quickly—and good luck finding an outlet, let alone an unoccupied outlet.

Be patient. I admit, patience is not always one of my virtues. I’m a quick walker, and I hate waiting in line for long periods of time…which doesn’t bode well for any comic con. But something to keep in mind at comic con is that you’re there for the experience…which often means waiting in line—for food, for a signature, for merch, to meet an artist, use the bathroom, and so forth. You could load your phone with related con podcasts, but I’d suggest striking up conversations with the people next to you, if you’re so inclined. Or with a cosplayer you see who’s completely awesome (remember, cosplay is not consent, so don’t take pictures without asking, and DO NOT TOUCH THEM). You’re all there for the love of comics and fandoms: ask them about their favorite fandom, or what their favorite comic is. 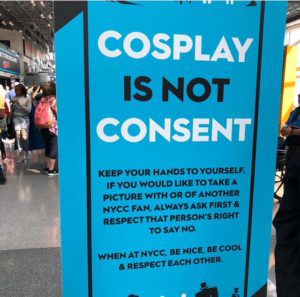 Go with the flow. I had a whole schedule mapped out on my con app, I had ideas of which publishers I wanted to see, and so forth. When I got to the convention center, though, I somehow forgot all about my meticulously mapped out schedule, and just sort of gave myself over to the con. I sat on the side and watched everyone walk by, I marveled at the cosplayers, and I let the energy of the crowd ripple over me. I wanted to soak it up, because the environment was like none I’d been in before. I can’t explain it, but it was awesome. And so I didn’t go to the panels I had wanted to, but I did go to the booths I wanted to see, and picked up the comics and books I’d hoped. But I also met a lot of new people, discovered some new comics along the way, and had a much more relaxed time than I anticipated. I’m usually a planner, but I think sometimes with cons, maybe planning everything to the minute isn’t the way to go. At least for me.

What are some things you’ve learned from going to comic cons?