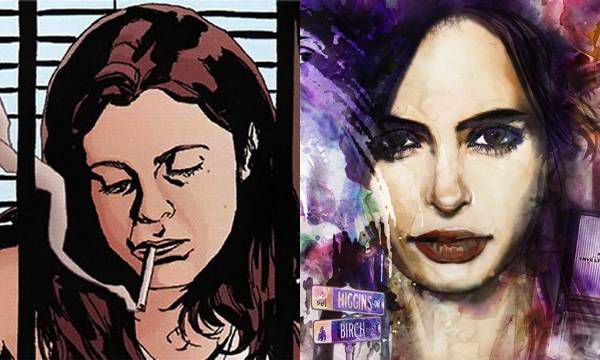 Back in November, I predicted that we would see a new comic series starring Jessica Jones as part of the All-New, All-Different Marvel relaunch. Yet, here we are, four months later, and Marvel has yet to announce an ongoing Jessica Jones series.

I’m not the only one to have noticed. At the Women of Marvel panel at C2E2 on Saturday, a fan asked when we might see a new Jessica Jones or Alias series, considering how successful the Netflix series has been. There was a palpable pause before Assistant Editor Emily Shaw stated that Brian Michael Bendis has been very busy lately with Iron Man and Civil War II, but that we might get a new Jessica Jones series when he had time. In the meantime, she was going to have a “big role” in Civil War II, as well as the previously announced guest appearance in June’s Patsy Walker, A.K.A. Hellcat.

Shaw’s statement more or less confirmed what many have long assumed—that Marvel and Bendis have an arrangement where he is the only person who gets to write Jessica Jones in an ongoing series. We don’t know if this is contractual or an informal agreement meant to show respect to one of Marvel’s biggest selling writers. Either way, the effect is the same: no Jessica Jones unless Bendis writes her, and right now he isn’t writing her (though there have been hints he intends to get back to her eventually).

In the meantime, one of Marvel’s most popular female heroes is left without her own book. This wouldn’t be a problem per se, if Jessica were being used well elsewhere. Post-The Pulse, Jessica appeared regularly in Bendis’s New Avengers, and she has since appeared in The Mighty Avengers and Power Man and Iron Fist. But, without a series of her own, something insidious has happened to Jessica: she has been decidedly mommy tracked.

Since the end of The Pulse (and, honestly, even before that), Jessica has shifted from being a complex independent woman into a stereotype of a nagging wife/mother who is most concerned with keeping everyone safe. Here’s her most recent appearance, by way of The AV Club‘s Oliver Sava:

Enjoying PM/IF but for the second issue in a row, Jessica Jones’ role is to nag in the living room w/ Danielle pic.twitter.com/gdqWCRb1LE

This is sadly totally in line with Jessica’s appearances over much of the past decade: her defining trait is now “mom”, and all of the amazing characterization from Alias has been thrown out the window.

It’s not just other creative teams messing up their portrayal of Jessica, though. In the final arc of Bendis’s New Avengers run (in an issue illustrated by Jessica’s co-creator Michael Gaydos, no less), Luke breaks up the team on Jessica’s insistence. Later, Jessica confides her guilt to Carol Danvers/Captain Marvel: “Carol, I’m the wife who’s making her husband do what she says instead of what he wants. I’m suddenly that.” Carol tells her it is the right decision, and then goes somewhere really shifty:

“Your job is to raise this baby and keep it safe.” That’s pretty clear, right there: Jessica Jones is no longer a superhero, or private detective, or journalist, or anything else: she has been completely mommy tracked, in an issue by both of her creators no less.

This is by no means to say that individual women should not think of themselves as mothers first, or that one shouldn’t make the choice to be a stay-at-home mom or stay-at-home dad. But, there is nothing in Jessica’s characterization in either Alias or The Pulse that suggests that is the decision she would make. Instead, it feels like Jessica has been reduced to a stereotype, and it’s all the more troubling that it has been male creative teams pushing Jessica into conforming with traditional gender roles.

There is absolutely no reason it has to be this way. Just compare this to Dennis Hopeless and Javier Rodriguez’s Spider-Woman, where Jessica Drew has been given space to be both a mother and a superhero/detective. Her life is going to be different now that she has a baby, but it is by no means over.

“I need to be me. Spider-Woman is who I am. Being a hero is important.” While probably not intentional, it is very hard not to read this scene in Spider-Woman as a retort to the scene in New Avengers, down to Jessica defining herself, rather than being defined by Carol.

(This isn’t to say I’m not still a little worried about the long-term implications of Jessica Drew’s baby; while Hopeless and Rodriguez have handled the story well so far, that doesn’t guarantee the next creative team will also do so, or that Jessica Drew won’t be stuck in purgatory without a solo series because no creative team is sure how to pitch a follow-up series.)

This month marks ten years since Jessica Jones’s last solo appearance in The Pulse #14. Ten years is an awfully long time for a popular comics character to be sidelined, and it is more than enough time for Bendis to have returned to the character if he had more stories he thought worth telling. He has, after all, written practically innumerable other titles in the meantime, touching practically all corners of the Marvel universe. It’s hard not to get the sense that the reason Bendis hasn’t written more Jessica Jones stories is because he thinks her story is over: that she was “fixed” at the end of Alias and will now live happily ever after.

I don’t expect Jessica Jones to forever be the whisky-swilling misanthrope she was in Alias #1, throwing guys through windows until the end of time. But, she is a fascinating character that many readers—especially many female readers—long to see again. There is huge potential in a series focused on Jessica trying to balance her work as a detective and her role as a mother. But first, Jessica has to get off the mommy track.

I understand that there are special circumstances involved with Jessica because of the circumstances behind her creation—Alias was the first title in the MAX imprint before it was really clear what that meant, after all. So, yes, by all means, offer Bendis first refusal on a new Jessica Jones series. But, if he’s not willing to write it now—not some vague time in the future when he’s not too busy writing about other characters—it is time for him to step aside and let someone else write a Jessica Jones solo series.

(And, ideally, that someone should be a working mother herself.)