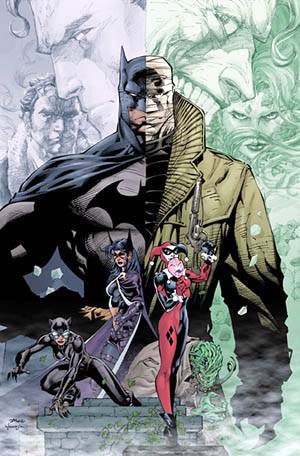 Welcome to another issue of Throwback Thursday, where Panelteers get to chat about the books we’re reading that aren’t all shiny and new. Just shiny.

I’ve been a fan of Batman for as long as I can remember, but until more recently, I never really read any of the comics. I watched the movies, I saw him animated on TV, played the games, wore the t-shirts, displayed Bat-verse statues on my shelves – I just never knew where to start with the books, and thus left them largely unexamined.

I think it was around the time I played Batman: Arkham City that I finally decided I really wanted to have a fuller, more in-depth knowledge of the character and his supporting cast. To that end, I’ve picked up a few books. First, it was The Dark Knight Returns, since I’d recently seen the awesome two-part animated film adaptation. Then, it was Year One, for similar reasons. Right now, I’m reading Hush. It crept up next in my Bat-TBR because a friend gifted it to me back in August. And just to get this out of the way: I am aware that not all of this is even “canon.” I read comics (and watch movies, and play games, etc.) for the stories, and don’t have the energy to look at things in terms of in or out of continuity when it comes to these complicated, long-serving characters.

Hush, to me, feels a lot like a ton of fan service. Between Jim Lee’s pencil work, which is sometimes brilliant, and other times facepalm-worthy with regards to proportions, and the huge, huge cast of high profile characters in the same story, this is a great book for folks who are not too familiar with Bats’ general history but know who a lot of the main characters are. You want Joker? Catwoman? Harley Quinn? Poison Ivy? Superman? Riddler? They’re all in here, and then some.

I might as well toss in a brief summary here. Hush is a story in which a bunch of Batman’s villains are acting in ways that are totally out of character. He suspects that there’s one head honcho behind all of what’s happening, and of course, Batman has to get to the bottom of it. On the way, he forms a romantic relationship with Catwoman, and gets his butt kicked more times than I care to acknowledge.

It’s a veritable buffet of characters to enjoy little bits and pieces of the Bat-verse, and you aren’t even expected to know the histories and connections. The writing is brilliant (main writer is Jeph Loeb here) in that it drip feeds information to the reader without going too heavy on unnecessary details and exposition. In other words: wherever you are in your knowledge of Batman and the Bat Family and Gotham’s villains, you shouldn’t get lost while reading this collection.

In a way, I’m glad that I’m reading the books “late,” after I’ve been introduced to and enamored by Batman in other media, because I already have formed my thoughts on the various characters and know their general histories. I can enjoy the stories without the learning curves involved. No stress about continuities because I’m reading collections rather than issue-by-issue – just stories. Even the totally nutso ones with, like, every character ever, like Hush.

Have you got a favorite Bat (or Bat-related) story you think should be on my TBR? I’m going to be at it for a long time, so ya might as well recommend some books for me to read.