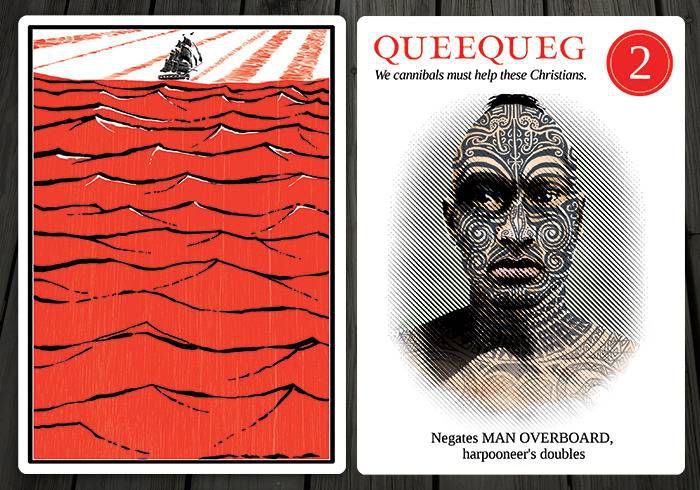 Lately, it seems like we’re seeing one hell of a resurgence in tabletop card games. It feels like every other week I’m going to a party where someone is playing Cards Against Humanity, and those game nights always spiral out of control. In a good way, of course.

After the massive success of Cards Against Humanity post-Kickstarter (and their subsequent projects), it’s no surprise that a whole bunch of tabletop card games are hitting the popular crowdfunding platform.

There are a bunch of the usual in terms of tabletop games. Lots of fantasy games, Dungeons & Dragons style adventures with beautiful artwork. And zombies. A whole bunch of zombies. But a number of them have a fantastic literary slant, and I can’t stop myself from pledging to these campaigns.

And these three? I want them. Right now.

MOBY DICK, OR, THE CARD GAME: Currently seeking funding (and surpassing their goal by a lot), Moby Dick, or, The Card Game by New York’s King Post transforms Melville’s literary classic into an interactive game. Complete with beautiful illustrations and found art that draws from the era that inspired Melville, the game places you on the Pequod, and has you travel the sea collecting whale oil and recruiting crew members.

You’ve got until the end of the month to pledge $30 so you can get the deck of cards, but if you kick up your pledge to $50 you can get the gorgeous tote bag they’re offering up. Or hey, go crazy and get yourself an actual boat. That’s  at the $10,000 tier. 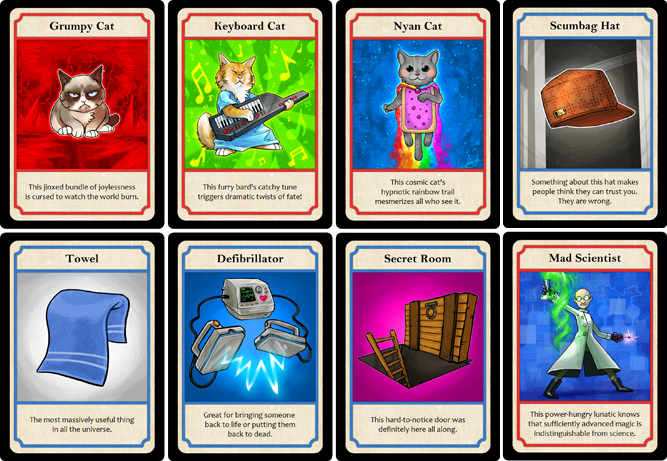 STORY WAR: THE STORYTELLING GAME: Created by Catnip Games in Astoria, NY, Story War isn’t about scoring the most points. It’s about the actual story you’re creating. Players create unique stories using the artwork and descriptions given to them by the cards, and weave their own narrative.

The Kickstarter campaign blew up to the point where they’ve got a number of new game modes, promised expansions, online multiplayer components, and more.  The game saw support from YA author John Green and a number of celebrated webcomic artists, some of whom ended up being in the game.

Sadly, the special Kickstarter exclusive cards, which included adorable pieces from Anthony Clark, Pendleton Ward, and Dinosaur Comics won’t be available outside of the campaign… but maybe one day! Hold on to hope, dear readers. Because Party Cat is awesome.

You can pre-order the game via Catnip’s official website, $25 for the regular set, $40 for the game with the expansion.

THE CARD GAME OF OZ: Have you always wanted to spin your own story in Frank L. Baum’s classic work? I mean, why should Sam Raimi have all the fun? This Kickstarted tabletop game let’s you populate the world of Oz, working together with other ‘authors’ (players) to tell the story.

The game is currently available for pre-order via Springboard, who apparently crowdfund a lot of cool stuff.  I mean seriously, look at all of this.

There are plenty of other games getting crowdfunded every day! Did I miss one that you love? Add it in the comments! And don’t forget to check out Book Riot’s own Kickstarter running right now, to publish START HERE, Vol. 2: Read Your Way Into 25 Amazing Authors.