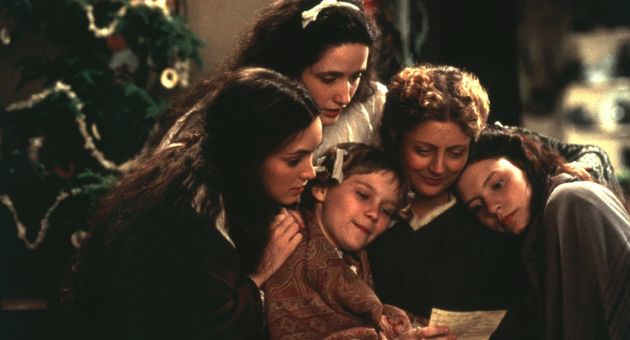 With yet another adaptation of Louisa May Alcott’s world-beloved Little Women in the works, I made a personal mission of watching the three best-known versions to compare and contrast. After putting holds on the three versions (which I’ll differentiate by year of release: the 1939 version starring Katharine Hepburn, the 1994 version starring Winona Ryder, and the 2018 version starring Sarah Davenport), I set about watching them in the name of research. I promise it had nothing to do with treating my eyes to a few hours of young and floppy-haired Christian Bale. Here’s what I found after watching these three Little Women adaptations. 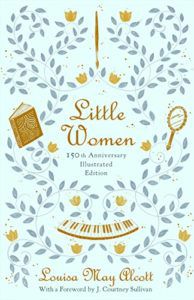 Before I dive in, a quick note: There are far more than three adaptations. I picked these three because they were the most easily accessible to me and I am a lazy person. PBS has a more complete list.

Finally, be aware this will spoil some major plot points for the book. It is over 150 years old, though, so.

I Have a Favorite…

…and it’s not the one I expected. As much as I love Katharine Hepburn (The Philadelphia Story is absolutely one of my favorite films of all time), I knew within the first ten minutes that the 1939 version was not going to cut it for me. Immediately, I was thrown off—something about it felt culturally anachronistic, the dialogue was painful and stiff, and the pacing was cringe-worthy. The 1994 version held more promise and was already an old favorite of mine—comfortable, true enough to the source material, and generally appreciated as a decent take on Little Women adaptations. And then I watched the 2018 version and was jarringly surprised by how much I liked it.

If you’ve seen this version, you’ll know that it takes some creative liberties with the original story and places it in modern times. Despite the changes, I couldn’t find any I felt compelled to complain about: all of them made sense to me. What was perhaps most important (and, frankly, very specific to why this film beat out the other two for me) was how the movie handled Beth’s death and, more importantly, the effect it has on Jo. An especially touching scene for me was the final one, in which Jo approaches an important moment of her life without the sister she felt closest to. Ugh, my heart. As someone who has experienced sibling loss, I could hardly handle how important this scene and that entire storyline was to me—only I hadn’t realized it until I saw it done well with the 2018 adaptation.

There were other reasons I loved the 2018 adaptation best—overall, the casting felt right-on, I enjoyed the dual timeline concept, costuming was fantastic, the writing was solid, and it was just a very sweet and modern tribute to such a revered piece of literature.

Okay, okay, 2018 wasn’t perfect. Look, I love me some Lucas Grabeel. I do. But I could not for the life of me get the concept of Ryan Evans (yes, High School Musical and Sharpay’s brother Ryan Evans) out of my head while watching it. Grabeel might have nailed the playful and nonthreatening characterization, but all the while, he seemed almost excessively young. This contributed, for me, to a lack of chemistry between Laurie and Jo.* His youthfulness indicated a seeming inability to really almost keep up with Jo on an intellectual level, which is essential to his character. Laurie shouldn’t, I don’t believe, ever be smarter than or even just as smart as Jo—but he should be nearly, and I wasn’t getting that with 2018. To be fair, this was also a shortcoming of 1939. I maintain, however, that we shall never see a more perfect Laurie than 1994’s. The ball is in your court, Timothée Chalamet.

*Even if they ultimately aren’t meant to be together, the storyline is an important one to character development all around.

Unfortunately for filmmakers but fortunately for mankind, scarlet fever is now easily treated by antibiotics. This means that when there are modern Little Women adaptations, it’s not exactly realistic to kill Beth off with scarlet fever and call it a day. The 2018 adaptation instead went with leukemia. This was especially striking for me, having just read Meg, Jo, Beth, and Amy by Rey Terciero, another modern take on Little Women (this one a graphic novel) in which Beth suffers from leukemia. I was curious about the seeming coincidence and checked in on it—it turns out, if you didn’t know, leukemia is the most common form of childhood cancer. To replace scarlet fever with it makes complete sense—leukemia is a traumatic diagnosis often with an uncertain prognosis. It provides more or less the same effect today as did scarlet fever in the 19th century.

Whether it’s the number of characters with which to work, the timelessness of a story of a young woman who struggles against the norm and her circumstances, or something else, I don’t think it’s possible to overdo it with takes on Little Women. There’s seemingly so much material there, allowing those who work on the adaptations to emphasize the pieces of the original story that have the most meaning to them. I can’t wait for the 2019 adaptation and look forward even more to whatever comes in the future.