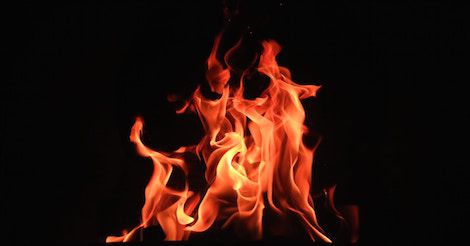 Graphic design studio Super Terrain’s edition of Ray Bradbury’s sci-fi classic Fahrenheit-451 took the internet by storm, thanks to a video showing how its all-black pages become readable text when exposed to an open flame. (This will, and quite possibly should, also work with a hair dryer or something else not completely on fire.) And now, for only $451 — get it? — you can preorder one to keep on a specially-heated shelf in your home! If you have $451 to drop on an artist’s book, we figure you could have custom heated shelves.

What could go wrong? Fire! People are going to set their homes on fire.

People have definitely noticed that Badgley’s Joe Goldberg is kind of an amplified version of his Gossip Girl character in that he’s “watching a skinny blonde girl from afar and making assumptions about her life based on what he learns while stalking her.” With You, however, Badgley’s playing a full-blown sociopath who transforms into a serial killer. Even though the series goes a little American Psycho by having Joe target some obscenely wealthy and profoundly unlikable targets, he’s a murderer. And Badgley’s using his Twitter account to point out that fact to viewers who are crushing on him because of Joe.

So not here for the lusting after Joe’s character in You and 1 billion % here for the actor using Twitter to nope-nope-nope it all.

When my good friend and fellow poetry lover Amanda Palmer asked me to send a poem for her husband, Neil Gaiman, to read to his 100-year-old cousin, Helen Fagin — the Holocaust survivor who composed that arresting letter to children about how books save lives — I chose a poem by one of Neil’s dear friends, Ursula K. Le Guin (October 21, 1929–January 22, 2018), found in her final poetry collection, So Far So Good (public library) — one of the loveliest books of 2018.