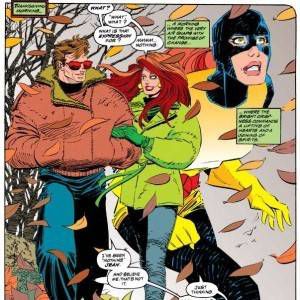 Love comics? Check out Panels, our sister site about all things comic books! 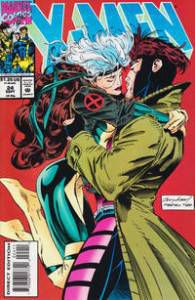 The cover of X-Men (vol. 2) Issue No. 24 was all the cosmic proof I needed in order to confirm beyond any shadowy doubt…something. I guess I didn’t know what it was I had been trying to validate. But before the question had even begun to form on my little lips, I held the answer—actually held it—in my chubby preteen paws. It was $1.25. It was beautiful. It was love. It was mine.

Earlier that year, just as my tenure as a fifth grader began, I learned that my soulmates wore spandex (whose doesn’t, I mean really?). The early ’90s lineup of the Mutant Genesis era was perfection. Jim Lee’s newly designed costumes were the very image of post-80s optimism while flaunting our fresh notions of modernism. I traded my lawn mowing money for back issues just about as fast as that grass would grow. I couldn’t get enough, and I became a devout Fellow of Mutant Studies. I was happy to memorize their histories, happy to deliver illuminating lectures to my classmates, and happier still to divide up the characters among us for afternoons of role-play on the playground. Bliss.

Wolverine was the first to get snagged up (obvi) but I didn’t mind—my sights were set on playing as the lesser-known Gambit. Gambit was probably every single thing that I wasn’t: tall, dark-eyed, Cajun, unfat, and a big time hit with ladies. His super powers included the ability to charge playing cards with kinetic energy and make them blow up when he threw them into things. I didn’t argue—what am I, a scientist?

He also possessed supernatural and hypnotic charm. Those geniuses at Marvel Comics built into Gambit a mix of highly combustible concepts: a man whose touch could turn harmless objects into explosives and, with the spark of a suggestive conversation, whose words could hit the tinder of impressionable listeners. I didn’t grasp the responsibility of that great power, but I ached for it.

A lot of people really hate Gambit, and on the surface I think their “style over substance” argument has merit. I could talk at length at the impracticality of wearing a bulky and cumbersome trench coat over your spandex jumpsuit, though maybe I’ve already said enough about it in that single sentence. I liked him. Sue me.

I also liked a particular classmate of mine named Nicole. After briefly looking over her choices she named Rogue as her character for the year. I didn’t think much of it. I mean Rogue, who’s capable of flight and super strength and invulnerability, would be handy in a fight and everything but her true power was simultaneously a curse. Skin to skin contact would transfer a person’s powers, memories, and very life right into her. Bummer.

Nicole was kind of spunky and a little rebellious. Through exchanges, glances, and small, innocent displays of affection she and I became a pair—a team within a team. And I didn’t even have to use the mutant hypnotic charm that I didn’t possess. Awesome!

But back to X-Men Number 24. On the cover of that issue, Gambit (see also: me) held in his arms a free-spirited and floating Rogue (see also: Nicole). Their eyes were locked in the Chinese finger traps of glances; the harder they tried to look away, the stronger the pull of attraction became. I understood these things. I’d been living with them all school year. Kind of.

Gambit and Rogue were lovers. I just couldn’t believe it. I brought that issue to school, tucked lovingly in the back of my social studies book so it wouldn’t be bent during my travels, and I showed Nicole. “Look!” I probably shouted. I remember her seeming super mildly impressed, and kind of cooing in the way eleven year-olds coo. Maybe we, like the images on the cover of that book, would remain locked arm in arm, frozen in a tender mutant gaze forever and ever.

We didn’t last. We were fifth graders. Sue us.

Gambit and Rogue, those star-crossed mutant heroes, might have served as my first model for a romantic relationship outside that of my parents. I think there really is something awfully romantic about their pairing. Here you have the one guy on the team who could effortlessly coax just about anyone into just about anything. But who does he end up with? The one woman with whom he cannot share even the most chaste of kisses, that’s who. Through accident or design, their story illustrated to me the beauty of skin-deep love and it stuck.

That issue follows their first real date, during which Rogue—a powerhouse of invulnerability—makes herself vulnerable enough to nearly reveal her actual name for the first time every. Gambit stops her, because he doesn’t want that kind of intimacy to feel forced. He can wait. He’s in love.

Like their playground imitators, Rogue and Gambit’s love didn’t last either. The relationship buckled under the weight of torture and tumult, made worse when Rogue absorbed the memory of the one time Gambit was partly responsible for the Mutant Massacre—an aptly named event in which a lot of mutants got themselves massacred. They couldn’t work past that bit of emotional baggage. Sue them. 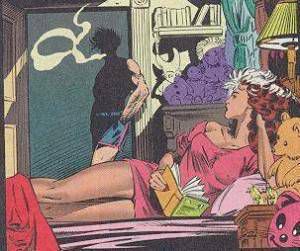 Habits of Highly Successful Mutants: Gambit smokes and Rogue reads. We all know which one makes you look cooler.

But the X-Men had other couples. Every agony needs an ecstasy, so we had the sweet relief of Jean Grey and Scott Summer (codename: Cyclops). Rogue was a badass, true, but Jean Grey was so badass that she didn’t even need a codename. Maybe that makes her a beautiful antithesis to her spunky, indestructible Southern teammate. After things went south in Dark Phoenix Saga, it probably would have been in poor taste to take that up that codename again, so she stuck with Jean most of the time. Cyclops also stuck with Jean. For real-time decades, they cared a whole lot about each other. While Gambit and Rogue struggled with forgiveness, Jean let the time that Cyclops conceived a child with her evil clone after he thought Jean was dead be a bygone. Even though it eventually led to an invasion of demons. (see also: what real love is) (see also: Inferno) (see also: haven’t we all been through that?)

I picked up something far more profound than stability and understanding from these two, however. In issue 308 of The Uncanny X-Men, it’s Thanksgiving time around the X-Mansion. There’s crunchy leaves falling, a bunch of super heroes playing football, and Jean and Scott take a long walk to reminisce about their long history. And then, to my great and pleasant surprise, Jean Grey pops the question. Jean Grey proposes to her boyfriend.

I didn’t even know that was a thing. When that kinetically charged idea hit me, my young mind exploded everywhere. I didn’t know what the phrase gender roles meant, but the implication wasn’t lost on me. You could invent your own rules in your own relationship, and if you did you were maybe a little more likely to live happily ever after because of it? O me! O life! 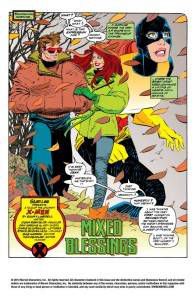 The wedding issue is great. Jean telekinetically lifts Professor X from his wheelchair so they can share a dance, Wolverine writes a congratulatory letter to the newlyweds and beats up Sabertooth so he can’t ruin the big day, it’s just great. I will try hard not to tell you that Gambit and Rogue respectively catch the garter and bouquet, but I…uh. It’s them.

Comic book continuity, not unlike the continuity of our own romantic lives, has a lot of false starts and do-overs, and through the Marvel Universe reboots that span the last two decades I don’t think either of these relationships are part of the story any more. But they’re part of my story. I am wont to rifle through the back issues of my life, and when the leaves get crunchy outside and I feel nostalgic, or I face what appears to be an untouchable obstacle in my relationship, I think of these lovers dressed in their splashy symbols of optimism and I am thankful to have had their guidance. Sue me.