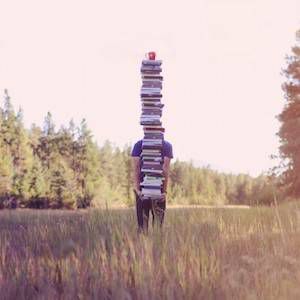 This is a guest post from Martin Cahill. Martin lives in New York, just outside that sprawling metropolis everyone’s always talking about. Bookseller by day, bartender by night, freelancer at all other times, he writes whenever he can. Every so often he remembers that sleep is important. He has fiction appearing soon in Nightmare Magazine and Fireside Fiction. He can be found writing about books and beer at his blog https://martintcahill.wordpress.com. He will also be attending the Clarion Writers’ Workshop this summer in San Diego. Talk to him about craft beer, books, Community or Locke & Key and you’ll most likely become fast friends. Follow him on Twitter @mcflycahill90.

If you’re reading this, then we’re of a kind, you and I. We are Stackers. Hardcover, paperback, trades, chapbooks, graphic novels, magazines, it doesn’t really matter. When we no longer have room on our shelves, we don’t give up, we build up. Towering and mighty, they pop up between full moons, growing with every used bookstore visit and every friend who says they’re going to just throw it out unless you want it. (And truth be told, we always want them. But that’s a story for another time).

So, with the picture of my college dorm in mind, where the books from home are stacked ten spines high, sitting among textbooks and papers and comics, we come to the incident. Some friends were in my room, my rather small room, where one person could comfortably spread both arms and almost touch the walls, and we were doing the college kid thing of, “hanging,” as they say. (Or used to say. I hope they still say it, that’d be nice).

The hangout took a tragic turn as a friend leaned back, and in one moment, knocked over a stack of books.

My heart leapt to my throat, and every nerve in my body went cold, so I could feel no thing but terror as they all went flying. Without a second thought, I jumped up, ran to them, making sure none were bent or cracked or torn in their great fall.

My friend muttered an apology, quirked an eyebrow at my behavior, said, “Don’t know why you’re acting like that. They’re just books.”

But we all know that isn’t true.

It was nothing I could articulate to her at the time. At that moment, I was too busy fixing the stack, too focused on not saying something that would make me sound absolutely insane in the eyes of my friend, who while well-intentioned, just didn’t understand my fixation.

They’re whole worlds bound in paper and ink and spines.

They’re the friends who never left you behind, the ones who were always there when the rest of the world wasn’t, the ones who turned a rainy day into an adventure.

They’re the ones that didn’t care that you were a little overweight, that you had glasses or flat feet or had to use an inhaler at the thought of a mile run.

They’re the ones that didn’t laugh or make fun.

Like a symbol of scientific notation, stories are an immense force of the universe bound within the confines of something as small as a paperback.

But that’s nothing I could explain to her at the moment.

When forced to defend your passion in a heartbeat, sometimes the words don’t come, sometimes trying to verbalize your soul can’t be done. I remember stammering, saying that they were important to me, but I could see that while she understood, she didn’t get it.

Which is fine. Not everyone will and maybe I wouldn’t get her passions.

And I’m okay with that.

After all, those books aren’t going to stack themselves.