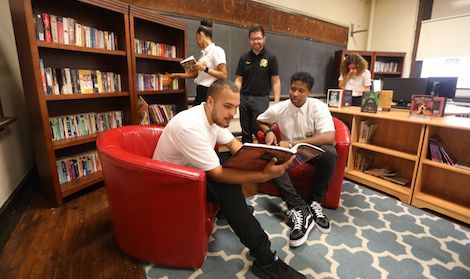 Once upon a time, Kensington High had its own student library. For reasons no one can recall (and were doubtlessly financial), the space was long ago repurposed as a teacher’s professional-development center.

But Kensington’s seniors know what was lost in the conversion:

A quiet portal to worlds of their own discovery.  A communal place loftier than the body-focused gym, belly-focused cafeteria and sit-and-listen auditorium.

I want these kids to get their library.

The Nobel prize for literature will not be awarded in 2019 unless trust is restored in the scandal-plagued Swedish Academy, the Nobel Foundation’s executive director has revealed. His admission came just weeks after the 2018 prize was called off in the wake of allegations of sexual misconduct, financial malpractice and repeated leaks.

Prepare to lose an afternoon or three: The Library of Congress announced today that it has digitized hundreds of hours of film and is making them available for viewing, free of charge, on its new “National Screening Room” website.