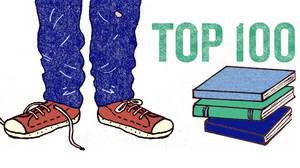 Over the last few weeks, NPR hosted a poll to determine the 100 Best Teen Novels. After taking nominations, they winnowed the field to 235 candidates, and more than 75,000 people voted. The results of the poll were fairly predictable (assuming for the moment you’ve heard of John Green), but the most interesting part of the process was the decision to disqualify some nominated novels for either being not mature enough (Laura Ingalls Wilder, for example) or too mature (A Tree Grows in Brooklyn, for example).

A panel of experts decided which nominated works didn’t quality as “teen novels,” and this seems to me antithetical to the spirit of the project. If you are going to ask the public at large what the best teen novels are, why impose limits on their responses?

Here’s a quick rundown of some of the omitted titles: A Wrinkle in Time, A Tree Grows in Brooklyn, Ender’s Game,  Watership Down, My Side of the Mountain, Where the Red Fern Grows, and The Little House books.

I’m going to put aside some inconsistent evaluation (Ender’s Game is too violent, yet The Hunger Games isn’t apparently), and just suggest that maybe your readers’ sense of what qualifies as a teen novel supercedes expert opinion. Opinion polls by their nature exist outside of expert opinion, often to the good.

Let’s be clear: there is no official definition of a teen novel, just as there is no official definition of literature itself. It is what we say it is. If enough of us think of Ender’s Game as a teen novel, well, then it is. An opinion poll that incorporates its own opinion isn’t a poll at all, and is even more misleading than a list compiled by just a few people, as it falsely represents the views of those it claims to have surveyed.