When Gillian Flynn’s Gone Girl left me gasping for more earlier this summer, I plowed through her backlist over a single weekend and fell hard for the way she incorporates social commentary and cultural criticism into uber-compelling storylines. To wit, this consideration of gender roles, expectations, and contemporary womanhood from Gone Girl:

Men always say that as the defining compliment, don’t they? She’s a cool girl. Being the Cool Girl means I am a hot, brilliant, funny woman who adores football, poker, dirty jokes, and burping, who plays video games, drinks cheap beer, loves threesomes and anal sex, and jams hot dogs and hamburgers into her mouth like she’s hosting the world’s biggest culinary gang bang while somehow maintaing a size 2, because Cool Girls are above all hot. Hot and understanding. Cool Girls never get angry; they only smile in a chagrined, loving manner and let their men do whatever they want. Go ahead, shit on me, I don’t mind. I’m the Cool Girl.

Men actually think this girl exists. Maybe they’re fooled because so many women are willing to pretend to be this girl.

Reading that, I had something of a revelation: there’s more to crime fiction than chasing baddies and figuring out whodunnit. This will hardly come as news to those of you who are well-versed in the genre, but to me–a devoted reader of literary fiction who has just started to explore genre in the last few years–it was world-shaking in the best possible way. I liked it, I loved it, I wanted more of it.

Around the time that I came to this realization, I discovered that crime fiction aficionado Sarah Weinman had posted a Crime Reading List for Those Who Read and Loved GONE GIRL at her blog. Sarah was then kind enough to make a specific recommendation for me when I took one look at the list and had no idea where to start. Given my interest in fiction that explores feminist themes, she suggested Dorothy B. Hughes’ 1947 novel In a Lonely Place. And I’m glad she did because it. is. awesome. Hughes’ feminism and cultural commentary are quieter and less obvious than Flynn’s–in fact, you have to look for them to see them–but they are no less affecting. Put together, these books present the evolution of a social conversation about how American culture treats women–in 1947, you had to be slick about it; in 2012, you can be openly disgusted as long as you write it well and surround it with an edge-of-your-seat story. 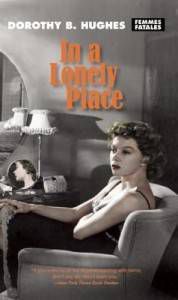 In both Gone Girl and In a Lonely Place, women are in danger, the victims of both overt violence and subtler sexism. They suffer at the hands of men and under the pressure of society’s expectations. Neither book is pointedly political or polemical, but both make important points, messages that extend beyond the page and have the potential to impact how readers view the world long after they close the covers. And I wonder if they are so effective precisely because they are not pointedly political, because they slide The Message in around the edges of potent stories. They backdoor it, if you will.

This canny insinuation of serious social commentary into fiction is something that literary writers rarely get right. It reads as pedantic or preachy or smug (coughJonathanFranzencough), and it is often distracting, if not wholly off-putting. Perhaps lit fic is already so dedicated to Being Serious that it can’t afford to state its point outright–and maybe its points is too often just “Look at how serious and thinky we are!”–but crime fiction, and genre fiction in general, makes it work by appearing to be all about plot-driving and world-building and adventure-having while actually being about much more. Perhaps genre fiction is the readers’ equivalent of having so much fun in a class that you don’t realize exactly how much you’re learning until after it’s happened.

And isn’t that the ideal? Don’t we want to learn and be changed by our reading without being hit over the head with The Big Lesson? I’ve no doubt there are works of genre fiction that lack the subtlety and finesse that make lit fic my first love, but lifelong devotee that I am, I am beginning to think that genre fiction might be better positioned for achieving the magical combination of enjoyment and edification. (And that’s to say nothing of the orders-of-magnitude larger readership of genre fiction, which means that the morals writers work into their stories of love, crime, and adventure can potentially reach many more people.) Genre fiction is often relegated to the realm of “fun reading” and presented as the junk food of a reader’s diet, but maybe it’s better for us than we realized. Maybe Ender really will save us all.