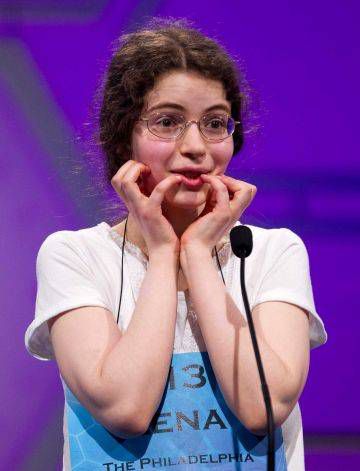 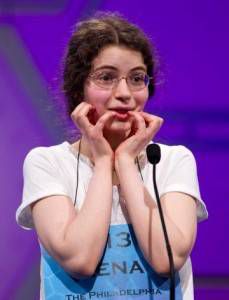 I watch a lot of ESPN, and I love to learn new words—but I don’t often watch ESPN in order to learn new words (“Boo-yah!” notwithstanding). There is, of course, one regular exception, and it happened again this past Thursday night.

The Scripps National Spelling Bee combines two of my passions—the scrutinizing of words, and the thrill of competition. Sure, some might say spelling is not a sport, but talk about pressure! Even in the NCAA Tournament, the lowliest team has 40 minutes of play in which to try and pull the upset; these kids—some finalists are as young as 11—have all of two minutes. This year’s broadcast of the final rounds did not disappoint: There was tension. There were bell-beaters. There was shock and dismay. There were the awkward moments when the hosts, more NPR than ESPN, were obligated to promote the upcoming Celtics-Heat conference-finals matchup before getting back to the analysis of French versus Italian Latin-derived word roots. I loved it.

And along the way, I got to learn new words. Most were of the generally obscure variety, such as the word that knocked out crowd-favorite Nicholas Rushlow, vetiver, defined as “a fragrant extract or essential oil obtained from the root of an Indian grass, used in perfumery and aromatherapy,” which is probably not seen as the least bit obscure to, say, perfumers and aromatherapists.

But the one that stood out to me was chionablepsia, defined as “inflammation and photophobia caused by exposure of the unprotected eyes to ultraviolet rays reflected from fields of snow or ice; snow blindness.” Sure, it’s another one of those words that most people would never even find a reason to use in their lifetimes. This is underscored by the fact that the Scripps scribes opted to use the context sentence to try and show how funny and hip they are: “Jean-Pierre blamed his collision with the tree on chionablepsia, though playing Words with Friends while Instragramming and texting his girlfriend may have had something to do with it.”

But even though I’ve never yearned for a satisfying way to succinctly describe so-called “snow blindness,” I found myself having that same gut response I get when learning certain interesting, narrowly defined terms: How cool that there’s a word for that.

Also, I saw it as a chance to “impress” my wife, who happens to be a brilliant ophthalmologist. I fully expected her to say, “Yeah, I’ve heard of that,” or, “Sure, it’s a condition.” And then—heh heh heh—I was going to ask her to spell it.

Only she looked at me blankly, and repeated the word. “Chionablepsia? Ummm, no. What is it?”

Perhaps, not the right thing to say. Early the next morning, we would be flying to San Francisco so she could appear for her oral boards, an exam the preparation for which she had been dedicating every free moment for the past several months. Apparently now, mere hours before this final step in her board-certification process, was the wrong time to bring up an eye condition that she had never heard of, but which was apparently familiar enough to some eighth-grader that the kid was able to spell it.

The next day, I found out that my wife had texted several of her colleagues, including some who, though no more brilliant than she, had more experience and more appropriate eye specialties for the question at hand: None of them could say, offhand, that they were aware of chionablepsia. In fact, the general consensus was that there isn’t any specific “treatment” for such a “condition,” other than “protect your eyes” or “try not staring at snow for awhile.”

And yet, the word exists.

So what’s the lesson here? According to even the most conservative estimates, English contains at least 250,000 words, with more appearing and evolving every day. Despite its depth and breadth and perpetual growth, the language has unfillable gaps when it comes to describing and explicating the human experience. I’m as guilty as anyone as falling back on that old rhetorical crutch, “For lack of a better word…”

Yet, when it comes down to it, no matter what highly specific or incredibly vague concept we are trying to express, far more often than not…there’s a word for that.

It’s part of what makes language so fascinating and worthy of exploration—and, to geeks like me, so much fun.