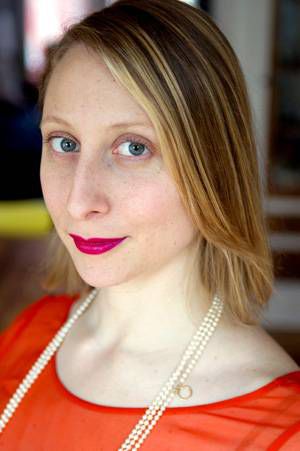 LH: What movies captivated you when you were a kid?

ES: When I was two years old, I named our new kitty Rainbow, because ‘Somewhere Over the Rainbow’ was my favorite song. Never mind that I spent a lot of time calling her ‘Toto’ for the same reason. ‘The Wizard of Oz’ was my clear favorite, but there were others–the cartoon version of ‘The Lion, the Witch, and the Wardrobe’ was a big one. It was basically those two with a lot of MTV (actual music videos!) in between.

LH: Did you ever try and emulate something you saw on MTV?

ES: Is this a trick question? Did you somehow get a copy of the VHS of my 11th birthday party, where I recreated Madonna’s ‘Express Yourself’ video wearing a padded bustier and bloomers?

LH: Are copies of this video available on the black market?

LH: What music from that era still makes you rock out?

ES: Here is a brief, incomplete list of bands who I will always listen to when they come on the radio: Paula Abdul, New Kids on the Block, Mary J. Blige, Jodeci, Boyz II Men…basically, if it’s really cheesy pop or R + B, it is forever etched on my soul. That is also true for Dinosaur Jr, which is weird because they have literally nothing in common with anyone else I love. Like, guitar solos? I HATE guitar solos. Except if it’s Dinosaur Jr.

LH: It’s understandable – Dinosaur Jr. is fantastic. Who was your favorite New Kid?

ES: My love for Joey McIntyre is everlasting and well-documented, though I will say that he was a younger woman’s choice. Nowadays, I tend to favor Donnie Wahlberg, who is so relentlessly positive and good-natured that I think he and I might actually be the same person.

LH: How do you manage your time on the internet?

ES: When I’m writing, I try to stay away, but I’m very bad at it. I don’t have one of those clever programs that refuses to connect you–I should get one of those. Right now, though, I feel like being on the internet is a big part of my job–keeping my website and Facebook page up to date, doing my Tumblr and Twitter. I know that a lot of writers find social media really tedious, but I happen to love it. It does make writing trickier, because there’s always the temptation to dip into the conversation, but such is life.

LH: Do you have any guilty pleasure sites? Like pictures of raccoons wearing pants or the heads of cats photoshopped on babies?

With that in mind, I don’t feel the least bit guilty about looking at page after page of Zooborns, or Perez Hilton, or reading the new issue of Us Weekly, or watching The Bachelorette. I love each and every one of those things to pieces. There is no shame in my game.

LH: Tell me something you think people would be surprised to learn about you.

ES: Well, my online persona is very sunny, and while I am often smiling and laughing and cheering other people on, I also have an elephant’s memory, so if you cross me, I won’t forget it. Basically, I am a secret assassin. People should be scurred.

LH: What do you think your supervillain name would be?

ES: Straubzilla? Though I think if I was going to murder someone, I would probably poison them. So maybe just The Baker. Now that’s sinister. Who wants a brownie?

Emma Straub is from New York City. Her first novel, Laura Lamont’s Life in Pictures, will be published by Riverhead Books in September 2012. Her debut story collection Other People We Married, arrived in February 2012, also published by Riverhead Books. Her fiction and non-fiction have been published by Tin House, The Paris Review Daily, The Wall Street Journal, The New York Times, Time,Slate, Cousin Corinne’s Reminder, and many other journals, and she is a staff writer for Rookie. Emma lives in Brooklyn, New York, with her husband.