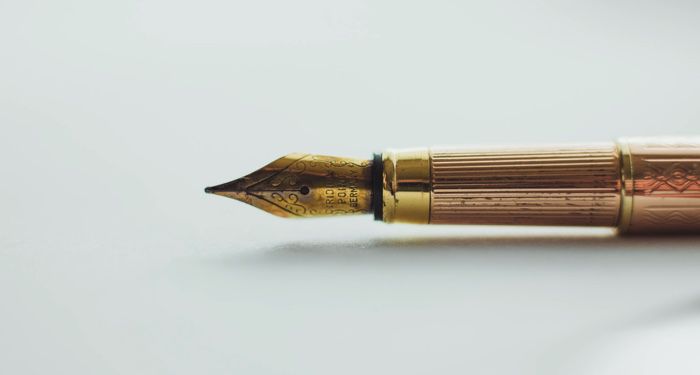 I always take note of the writer’s pen. What has begun as a mild curiosity more than a few decades ago has now become a mild obsession. What pen (or pencil) does a writer prefer? Do they use the inexpensive ballpoint pen, the felt tip pen, an upscale gel pen, or the sublime cartridge pen?

At every book signing event that I have attended, I take note of the author’s pen. I remember my delight at seeing novelist and essayist Cynthia Ozick using the Paper Mate Expresso black ink pen with a porous point tip: a satisfying discovery since I had been using that particular pen at the time.

Many of the writers seen through the years have been fond of the felt tip black ink medium point of various manufacturers. Perhaps the grip was easier on the wrist and fingers which made signing all those books endurable. And then I was left with the question: what pen (or pencil) did they really use when they created their word magic?

I remain curious about the writer’s choice of pen, (and their ever-present writer’s notebook—another subject entirely) and if that particular pen is essential for their entrance to the “writer’s zone.”

The “zone” is that nearly mythic state of being when the writer’s words are excavated from their most subconscious mind and placed on paper. Time and space slip away for the writer; the words are free-flowing and the writer is in a near trance-like state.

The “zone” operates without any effort from the writer—the words are fluid and keep running like a river.

And, the writer needs that essential tool, the pen, to arrive into the “zone” and remain there. (I write with respectful consideration to all things digital, and with a nod of appreciation to the sound of the clicking keyboards, but at this time I am drawn to pen, paper, and ink—no substitutions).

For me, the sound of creation is synonymous with scratch of a raspy pen hitting paper. Or the smooth glide of a Waterman fountain pen with blue ink and a medium point whose feel resembles a painter’s brush and the result is prose that appears like a watercolor painting.

I have always enjoyed the writing workshops that include writing exercises. Everyone notices the cacophony of sounds of pen on paper that hang in the air—encouraging further observations.

My obsession involving writers’ pens is not an uncommon one. I made an online search regarding writers and their pens of choice. The overwhelming preference appeared to be cartridge pens of various sorts. And then I found a few details regarding the poets Sylvia Plath and Seamus Heaney that gave testament to the power of the pen.

It appears that Ted Hughes, husband of Sylvia Plath, had a loathing of his dear wife’s pen of choice, the Shaeffer cartridge pen. Sylvia Plath suffered with anxieties and depression throughout her marriage, sometimes Hughes commented that it was his wife’s tremendous fear of writing that was responsible for melancholia.

Of course, Hughes came to write about his wife’s fears and focused on her Shaeffer pen as the object of his disdain. Hughes’s vitriol towards a simple writing tool comes through in every syllable:

“Your writing was also your fear.
It made a noise like your typewriter.
It hid in your Shaeffer pen—
That was its favorite place. Whenever you wrote
You would stop, mid-word,
To look at it more closely, black, fat,
Between your fingers—”

Which is why I much preferred the discovery of the great Irish poet Seamus Heaney and the respect he holds towards his pen. It is his working instrument—just as farmers use the plow, the writer uses the pen.

“Between my finger and my thumb
The squat pen rests; snug as a gun.

Under my window, a clean rasping sound
When the spade sinks into gravelly ground:
My father, digging. I look down.

The cold smell of potato mould, the squelch and slap
Of soggy peat, the curt cuts of an edge
Through living roots awaken in my head.
But I’ve no spade to follow men like them.
Between my finger and my thumb
The squat pen rests.
I’ll dig with it.”

There is the one outstanding and obvious lesson I have learned from my dalliances into the study of writers and their pens. It is not the particular pen, it is the writer’s mind that needs observation to learn the mechanics of creativity. Real writers can write with any pen under any circumstance.

But I would like to know if they prefer purple, blue, or black ink.