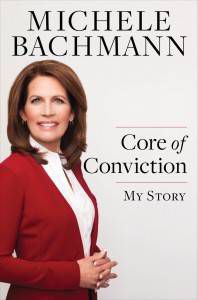 Yesterday marked the one year point until the 2012 election. And if you haven’t read my profile yet, you might have missed that I live in DC. And I work in the news business. So…I’m a little bit mired in campaign nitty gritty as you might imagine, which ties in unexpectedly well with my interest in books.

A few weeks ago, I took a field trip with my grad school cohort to a book printing plant in Virginia (yes, field trips for grad school are as awesome as they sound!). A book we saw in the process of being bound and covered? Michele Bachmann’s Nov. 21st release Core of Conviction: My Story. As much as my classmates and I moaned and groaned about another political memoir being published (and there were a lot of copies being printed), I realized how much a book is a part of a presidential campaign now. And really, not just a book, but a book that is blatantly about running for president – one with campaign pledges and position papers disguised as chapters and some solid partisan blaming-of-the-other-side.

It’s almost as if a candidate cannot be taken seriously unless he or she has a book out. Or publishing a book is an indication that a run for the highest office in the country is on the horizon. This is why I still haven’t totally ruled out Sarah Palin’s entry into the field, despite her protests that she’s not running — her 2009 book Going Rogue sold more than a million copies, and her 2010 book America by Heart was practically a script for a run against Obama in 2012. Other 2012 Republican candidates that have recently written political memoirs?

Jon Huntsman hasn’t written a book, which is maybe why he’s not considered a serious contender in the race anymore. Rick Santorum wrote It Takes a Family: Conservatism and the Common Good in 2005, which isn’t exactly recent in the world of political publishing; it also possibly explains why I also had to Google to make sure he was actually running for president.

Lest you think I’m partisan, Democrats are equally as guilty of using book sales to promote their campaign and message. President Obama, when he was still Candidate and Senator Obama, published The Audacity of Hope just before he announced his candidacy; keyword there…Hope. His earlier memoir, Dreams of My Father, wasn’t exactly political, but then the audio version did include the 2004 Democratic National Convention speech which really put him on the national political map. So maybe it was a political memoir after all. Hillary Clinton came out with her book, Living History, in 2003 but it became a campaign book as the 2008 election ramped into high gear. Joe Biden’s book Promises to Keep was published in 2008 just before the election, as he was running for Vice President. Rudy Giuliani, Bill Richardson, Dennis Kucinich — they all published books as part of their campaign strategies in 2008.

Try as I might, I couldn’t find any statistics to support the idea that reading a candidate’s book makes a voter more or less likely to vote for him or her in the upcoming primary or general election. And in the wake of several pieces of news regarding Cain’s book, wherein his campaign reportedly bought thousands of copies of the book and then the speculation that his campaign is just a very elaborate book tour designed to sell more books, it becomes slightly more clear that sometimes both political books and presidential campaigns are just about making money and making headlines. Of course, those headlines in the last week or so are less to do with Herman Cain’s book, but still…any publicity is good publicity in the world of book sales. In the world of presidential campaigns — that’s still too close to call.