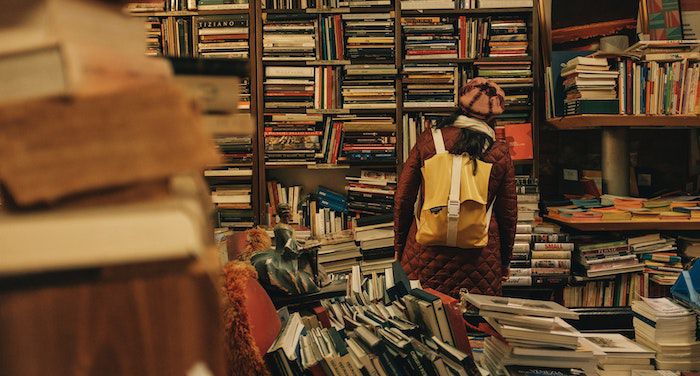 I was about 12 or 13 when I first discovered the magic of used books. Turns out, completely unbeknownst to me, there was a used bookstore in the little shopping district down the street from our house that had been there for decades. My parents never shopped there, so the first time I ever set foot in it was when a neighborhood friend convinced me to go with him to find a book for his mom. (It was called “The Booktique.” At the time, I thought it was immensely clever. Now, a bit corny.)

I returned a few times on my own, buying Garfield comic books and later a John Grisham paperback, since that’s what I was into that summer. It went out of business the following year which, in retrospect, was not surprising — the selection and the interior had not kept up with the 21st century. But that didn’t happen before I found their collection of old National Geographic magazines, which was when I suddenly decided I was going to own every single back issue known to man of this magazine. The oldest one I’d found there was from 1984, and the oldest one I ever did find was from 1975, but you would have thought I’d struck gold for how much I thought these would be worth. (I’d spent no more than a dollar on them and most were not in very good shape, so probably not very much, sweetie.)

The point being that finding old selections of National Geographic was what really introduced me to the wide world of used books. It wasn’t that I was all that interested in the magazines themselves; I just liked owning something that was either vintage or out of print and thereby hard to find somewhere else, or at all. Maybe I would never have found this one copy of this one book if I hadn’t decided to come to this used bookstore on this one day. After “The Booktique” closed, I would make regular visits to two Book Markets, a Canadian used bookstore chain, where I did find a few out of print gems. But the world of used books was one that would end up swiftly disappearing from my suburb entirely, a mere three years after I discovered it.

Once I started commuting into the city every day for college, within months of starting school I started looking up the best used bookstores to visit, since I knew there had to be a much wider selection. It took a few years, but I did manage to visit almost all of them, including one that I enjoy returning to regularly. (I returned for the first time in two years this summer thanks to Miss Rona.) As time went on, I learned that I didn’t necessarily have to find or buy anything in these stores; it was just a matter of being around books previously owned by someone else that contains its own form of magic. In a world that became very digital very fast, used bookstores continue to provide a necessary portal to the past, one that might contain knowledge still useful to us in the present.

Personally, as an old soul who’s always enjoyed the pop culture of time periods before I was born, I love searching used bookstores for out-of-print coffee table–style books that might contain incredibly dated information, but an illuminating view into the perspective of a bygone era. I’m not saying I would take life advice based off the sometimes harmful misinformation found in out of print books (read: racism), but I’ve always found it interesting to see how previous decades approached certain subjects, if at all.

My local library also usually holds regular used book sales and while I haven’t found much by way of out of date pop culture books there, I did find one that inspired me to incorporate it into an original piece of creative nonfiction. It was called The Book of Ages, which acted as a kind of encyclopedia into what is expected from humans at every age and stage of life. Some of it was hopelessly dated, while other parts held up remarkably well. Using a prompt from a creative writing workshop I’d taken, I made something that showcased the ways the book had aged well and the ways it had not — which is true of almost anything, since nothing can hold up perfectly throughout all of time. (Unless we’re talking about The Breakfast Club, which somehow remains effortlessly flawless with every passing era.)

Whatever the case, used books remain a vital source of literary knowledge and can act as a refuge for those who might feel out of place in the time period they grew up in and yearn to explore the worlds and cultures of days past. Something shared often among used book lovers is words written in the books by past owners, especially when the words seem like something sentimental. (Did the owner die? Did they have a falling out and now hate the bitch that gifted them the book? I need ANSWERS, Maureen!) I myself haven’t found much of interest written in used books I’ve bought, but I am a firm believer in the idea that books have their own magical ways of choosing to enter our lives when we need them most. And since used books tend to be all the more precious since there may only be one of them, that magic is all the more true.