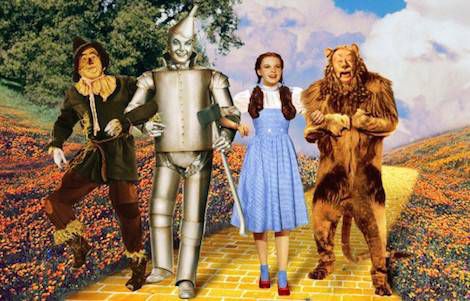 The Wonderful Wizard of Oz by L. Frank Baum is a timeless classic. Even today, almost 120 years after its original publication, the book captures the imagination of adults and children alike. The movie, which is also a timeless classic, is just as awesome and is considered one of the greatest films of all time. It is one of my favorite films and I never get tired of watching it. To quote the classic villain Tony Perkis, “It was wonderful. Wow! So entertaining. The cinematography and editing techniques…”

The movie, unlike the book, is so mysterious and surrounded by fan theories. Did a munchkin really die on set? Does Pink Floyd’s Dark Side of the Moon really match-up with the movie? Was Glinda, the good witch, actually the true villain in the movie? All these fan theories and the success of the film have placed the book on the back-burner, in my opinion. I am guilty of having watched the movie about 50 times before I ever read the book. And did you know there were a total of 15 books in the Oz series? Shame on all of us. The books are so good but overshadowed by the movie’s addicting magic. But where did the movie go wrong? Here are some of the major differences between the book and the movie: (Spoiler alert)

In the movie, Dorothy gets knocked out by a flying window during the cyclone scene. She eventually lands in Oz but by the movie’s end, she wakes up in her bed with her family surrounding her. This reassures the viewer that the whole ordeal was simply a dream. In the book, however, there is no dream. Dorothy, Toto, and their home are all swept up by a cyclone and dropped into the magical Land of Oz. Maybe the Land of Oz can be found somewhere over the rainbow?

Who can forget the movie’s iconic scene when Dorothy is shown wearing those sparkly ruby slippers? Well, the book’s slippers are actually silver. Story goes, the slippers were changed to red so they would better stand out against the yellow brick road. Couldn’t they have kept the slippers silver and just added some sparkly glitter to them? They totally ruined it.

The Tinman Wasn’t Always Made of Tin

The Tinman in the movie rusts stiff when he is rained on while chopping wood one day. The same thing happens in the book. Okay, cool! What the movies does not show, however, is that the Tinman was actually once a real man. He was in love with a beautiful munchkin girl but the woman the munchkin girl lived with did not want her to get married and leave. She wanted her around to do all the chores so she struck a deal with the Wicked Witch of the West. The witch cursed the Tinman’s axe to chop him up into pieces. The Tinman was luckily put back together with pieces of tin by a local tinsmith. For obvious reasons the movie did not show this part.

The Witch of the North

If you have only seen the movie then you assume Glinda is the first witch Dorothy meets when she lands in Oz. The book told it differently. The first witch Dorothy meets in the book is the Good Witch of the North. She welcomes Dorothy and kisses her forehead for protection on her journey down the yellow brick road. In the book, Dorothy does not meet Glinda until just about the very end. Why they would change something so simple is beyond me.

The movie is very watered down and filtered to not be so dark. Not the book! The darkness in the book is great and there is definitely violence. The Tinman being chopped up into pieces isn’t the only gory part in the book. The Wicked Witch of the West sends servants to destroy Dorothy and her crew. Forty wolves are sent to maul them to death. The Tinman chops off all forty of their heads, however. Next, she sends forty crows to attack but the Scarecrow twists all of their necks until all of them are dead. Finally, the witch sends a swarm of bees to sting them to death but Tinman steps up again and allows the bees to sting him. Of course, being made of tin, it doesn’t hurt him so all the bees die once they lose their stingers.

The movie is great but the book is just so much better. I would like to see a much darker reincarnation of the movie using actual scenes from the book. What do you think?