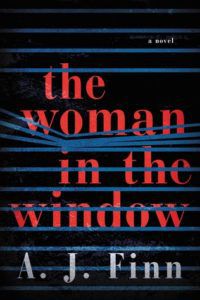 When I opened the package from my mom, I wasn’t sure how this mystery novel would be any different from the countless other thrillers with “woman” in the title that we’ve bonded over—books often turned into movies following white women who turn to wine for solace after their families fall apart. I soon found myself perched in my yellow chair, where I remained from the first word until I turned the final page of The Woman in the Window. For that weekend, I found great comfort in my cozy apartment. Recently, however, what was once a place in which I felt I was in total control, has since become a reminder of what little control I actually have. While our doors have collectively remained shut, our current state of sequestering opens up new possibilities to connect with the protagonist, Anna Fox.

While Anna, a former psychiatrist suffering from agoraphobia, peered into her neighbor’s windows, I pried into the life she (mis)represented. She watched what her neighbors tried to keep submerged, and I wondered from what she was keeping herself distracted.

After a new family moves in across the way, Anna witnesses a murder that left me wondering not only about the trauma that traps her in her home, but what happens to women “who view too much” (4). While she tries to piece together what happened, she’s forced to face her own past in order to decipher between fact and fiction. What if the people we are to fear most aren’t faceless strangers we leer at from our windows but our own faint reflections staring back at us? Despite the fact that reports from RAINN state that regardless of gender, eight out of ten rapes are committed by someone familiar with the victim, when we think about the faceless strangers that women are socialized to fear most—strangers in dark alleyways, strangers in bars, strangers in general—how can we possibly blame her for not leaving the comforts of her home?

While gender doesn’t directly come up much in the treatment of agoraphobia, it’s impossible to ignore the fact that it affects twice as many women as it does men. According to Dr. Fox, agoraphobia is “the fear of the marketplace, in practice the term for a range of anxiety disorders” (26). As Maureen McHugh writes, “Home, and a sense of place in general, may play a greater role in women’s psychic lives than in men’s. In a study of the meaning of home, women described home as a place for family, self-expression, and security” (383). Anna’s home is haunted by the memories of her husband and daughter, whom we only interact with through phone conversations. She lingers on the line, hoping to hang onto each call for as long as possible. The tension between her career as a child psychologist and the guilt she feels—for what she perceives as her failure to fulfill the domestic roles of wife and mother she fears she took for granted—is palpable during their chats.

In an instant, and despite her best attempts at resuscitation, the life she once knew is over. When her affair with a colleague surfaces during a rocky road trip to the mountains, her family is fractured forever. Their trip turned out to be nothing more than a reminder of how harsh, unforgiving, and bitter cold the outside world can be. In an environment filled with uncertainty, it was the actions she had control over that caused her marriage to crumble. This was the trauma that trapped her.

In the fear-inducing final moments of the novel, Anna must confront how hollow was the sense of comfort she found within her home. Agoraphobia and quarantine have radically different etiologies, but many of us may be confronting feelings similar to Anna’s now that we have been confined to our “safe places” these past few months. Those safe places and the public space of the marketplace look very different depending on whether we work remotely, essentially, or even work at all. As we peer out our windows, are we willing to acknowledge the essential persons and contingencies of the marketplace staring back at us?