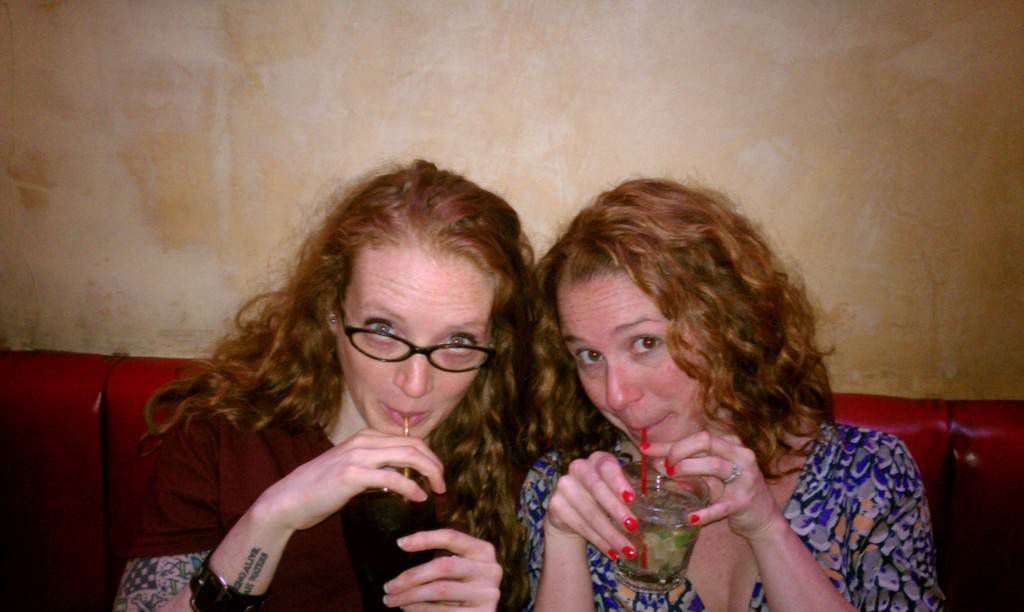 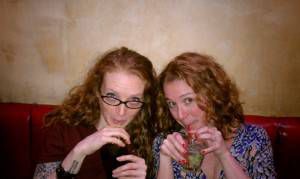 RJS: Love nugget! We converged on New York City and spent lots of time in the same places together, and the universe didn’t implode! Oh, and there were books! So. Many. Books. More on those in a bit. First, what was your approach to BEA? Did you plot out signings and author appearances ahead of time, or fly by the seat of your adorable pants?

LH: I plotted it out, to make sure I didn’t miss anything I wanted to see. I have a terrible sense of direction (as you witnessed) so having everything mapped out in a building the size of several city blocks was a big help. And I managed to do just about everything I wanted to do, except see Ian McEwan or Megan Abbott, because I went to see Neil Young and Patti Smith instead. Which was one of the most remarkable things I’ve ever witnessed. Did you get to do everything you wanted?

RJS: Almost. I missed the 7x20x21 panel, which is always one of my favorite things at Book Expo, but I did succeed in my primary mission: get Naomi Wolf’s Vagina. (Note to self: those italics are *real* important.) I spent a good chunk of the daytime in meetings and didn’t get to go to many author talks, so I got my facetime in at parties. Like when I introduced myself to Jonathan Evison and he reminded me that I still owe him panties from when I declared West of Here pantyworthy. It was an awesome moment, and hilarious in the “OMG, my life is weird” way. You have any of those this week?

LH: I am a huge Chip Kidd fangirl, and while waiting in line to meet him, I was gushing to our co-Rioter Rachel about how excited I was. Unfortunately, she had to run off to do something else, so I had to wait it out alone. When I finally got to the front of the line, I had just introduced myself to Chip when the guy behind me yelled, “Watch out! I heard her say she wants to lick your face.” I was mortified. And that wasn’t exactly true – I had told Rachel I was glad she was there with me so she could hold my leash so I wouldn’t jump up and lick his face. And Chip didn’t miss a beat. He simply said, “Post-face licking, you’d probably regret it.” That was the weirdest thing that happened to me, and it was still pretty awesome. There was nothing bad about BEA this year. Not like last year, when my front tooth was knocked out. Which I will just say was during a fight with ninja werewolves, and leave it at that.

RJS: So, lessons learned: Miss Liberty cannot be left to her own devices, Rachel cannot be trusted, and the guy behind you in the signing line is always ready to throw you under the bus. I thought book people were supposed to be warm and fuzzy!

LH: I think the guy was worried he’d be called to testify later. Seriously, though, BEA was so amazing!

RJS: It was! There’s something unspeakably great about having so many book people gathered in one place. It’s very equalizing. Like, you might stand in line next to someone whose life couldn’t be more different from yours, but you speak the same language. I get all smooshy thinking about it. Book people are the best. Also: there were bohunks in tank tops at the Ellora’s Cave booth. What’s not to love about a trade show with built-in eye candy?

LH: Can you please say that last part again in English for me?

RJS: Hee! Ellora’s Cave is a romance and erotica publisher. They had very well-built men in very small tanktops on display. How’s that? 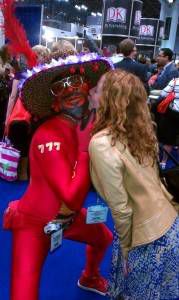 LH: Creepy. But not as creepy as the guy in the latex devil outfit who accosted you.

RJS: Okay, he was creepy, but the women dressed as angels in barely-there leotards, promoting a book about getting saved, had to be the weirdest. You never know what you’re going to see at BEA. Or who. Did you have any celebrity sightings?

LH: Every author is a celebrity to me! On top of them, I met Dr. Ruth. You know how they say the camera adds ten pounds? In her case, the camera adds ten inches. As tiny as you think she is, she’s actually tinier. I also saw Kevin Pollak while I was waiting in line for frozen yogurt. Most exciting was off-site, when we saw Robert Loggia at dinner. He’s a legend. You?

RJS: I’m so jealous that you got to meet Dr. Ruth. Her Twitter feed is one of my favorite things on the internet. And speaking of legends, I saw Gloria Steinem at dinner one night. Gloria Steinem. Talk about needing someone to hold my leash! Not just a rockin’ author, but one who actually did change my life. It doesn’t get much better than that…even if I didn’t say a single word to her.

LH: So to recap: Seeing our literary heroes and getting Vagina good, people in latex bad. Goodnight, everybody!