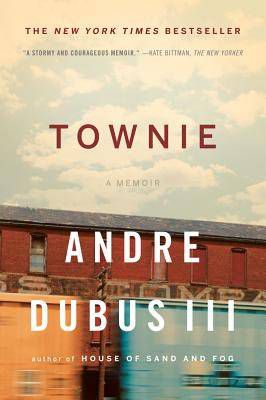 RJS: Okay, sugar britches, we’re talking about memoirs this week. My relationship status with memoirs is “it’s complicated.” When they are good, they’re very, very good, but when they are bad, they are horrid. And I’ve read some of both. To start with the good: did you read Townie by Andre Dubus III? I feel like “raw” and “candid” are words that get thrown around A LOT when we talk about memoirs, but they’re actually justified in this case. It is face-meltingly good.

LH: I love Townie! It was interesting to read about where he grew up, because it’s quite close to where I live. And I thought he wrote about his father with a lot more leniency than he warranted – it was very classy on A.D.III’s part. Quid pro quo, Clarice – have you read Five-Finger Discount by Helene Stapinski? It’s about how she grew up in a family of swindlers in severely corrupt Jersey City.* It is so utterly delightful!

*Stapinski grew up in Jersey City in the early seventies – I am not claiming Jersey City is still severely corrupt. I’m sure it’s a lovely place.

RJS: No, but it sounds right up my alley, especially after my love affair with The Mark Inside, which is all about the evolution of con artistry. Maybe it’s the ex-psychologist in me, but I have a thing about mental health-related memoirs–I can’t resist ‘em. And man, are there some doozies out there. One awesome one, though, is Emma Forrest’s Your Voice in My Head, which is just as much about the impact a good therapist can have on person’s life as it’s about dealing with bipolar disorder. Do you have any memoir subject kryptonites?

LH: Not really. I’ll read anything if it looks interesting. I do tend to pick up memoirs by people who create things I love, like musicians and authors. One of the best memoirs I’ve read recently is Rat Girl by Kristin Hersh, a founding member of Throwing Muses. It knocked the socks right off my brain. It’s from her journals when she was a teenager, the year she started the band, was diagnosed with bipolar disorder and found out she was pregnant. She writes beautifully, with a really unique voice.

RJS: I sort of go in the opposite direction–while it can be fun for me to read about writers’ and artists’ lives, I usually gravitate more toward memoirs by people who had pretty normal lives but find a way to pull out the humor or dysfunction or extraordinary moments. Like, there’s nothing really remarkable about dealing with depression, but Emma Forrest tells it remarkably in Your Voice in My Head (yep, two mentions in one installment–the book is that good); ditto for going to rehab, but Augusten Burroughs’ Dry is fantastic. And Shalom Auslander’s religious upbringing probably wasn’t significantly weirder than many, but he makes it super compelling in Foreskin’s Lament. Tell me you’ve read it!

LH: I’ve read it. Okay, I’m lying, but I did read his new novel, Hope: A Tragedy, which is a scream. I have read some memoirs where extraordinary things happen to people – the first that comes to mind is The Bear’s Embrace by Patricia Van Tighem. Van Tighem and her husband were attacked by a grizzly bear while hiking in the Canadian Rockies, and suffered severe injuries. I read it at least a decade ago, but I can still remember her describing the sound of the bear’s teeth scraping her skull. DO NOT WANT. I also enjoy reading memoirs about places and things I know nothing about. One of my very favorite memoirs is Don’t Let’s Go to the Dogs Tonight by Alexandra Fuller, about how she grew up in South Africa during the Rhodesian Civil War. Three words: Ah. Stound. Ding.

RJS: Man, I love that title. I haven’t read the book yet, but every time I hear the title, I think, “Anyone who can come up with a title like that *must*  have written an amazing book.” There’s something really perspective-giving about memoirs for me–I love being pulled outside of myself and shown evidence that people go through really incredible and difficult and dangerous things and come out okay. Makes me realize that my stresses, no matter how real, are pretty insignificant. And then, of course, there’s the voyeurism. If I’m honest, that’s what really draws me to memoirs–I’m nosy, and I can’t resist a chance to walk around inside someone else’s head, hear their thoughts, see their dysfunctions, and maybe judge them a little. But just a little. Mostly, I’m grateful that people are brave enough to put it all out there.

LH: I see a tell-all book in your future. But what would it be called?

RJS: Don’t Make a Book Blogger Take Off Her Earrings…and Other Tales from the Interweb. Or maybe Damn It Feels Good to Be a Ginger. Actually, the thought of writing a memoir makes me break out in hell-to-the-no hives. I prefer my relationship with tell-alls to be one-sided. They give, I take. What about you?

LH: You little life-story leech! Mine would be Adderall That and a Bag of Chips. Or maybe The Hiss in Whisky. Wait, no – Epic Nerdpurr: Tales of a Velocireader. But I, too, feel like I’d never write a memoir. Maybe if I do something really exciting one day, like fight martians while riding a giant space battlecat. I have been playing around at writing essays, but lately, I’ve been in a bit of a slump. It feels like everything has already been written about. My friend was trying to talk me down the other night when I was particularly whiny. He says it’s all about how you say it, not what you’re saying.

“And not everything has been written about,” he said. “Has everyone sat in a bathtub full of Froot Loops and milk? Has everyone accidentally stuck their butt in Daryl Hall’s face?”

“No,” I sniffed. “Probably not accidentally.” Friends are the best.

RJS: I *really* want to know the Daryl Hall story, but I know how you like to be mysterious. So let’s end it here and keep folks guessing.

Your turn, readers. What do you love about memoirs? What are your favorites?