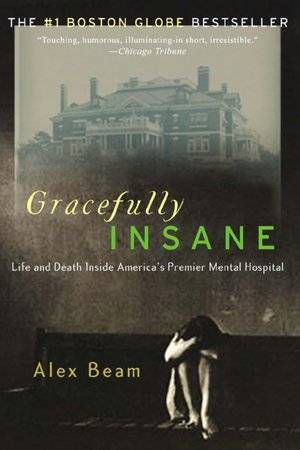 LH: In our last conversation, we talked about memoirs, and you mentioned you had a weakness for mental health-related memoirs, so I thought it would be fun to expound on that subject today, because there are so many great books in this category. To start, I will mention not a memoir, but a fantastic book about a mental health institution – Gracefully Insane: Life and Death Inside America’s Premier Mental Hospital, by Alex Beam, about McLean Hospital in Massachusetts. So many famous people have spent time there, including Sylvia Plath, Anne Sexton, Zelda Fitzgerald and David Foster Wallace. The history of the place is fascinating.

RJS: That sounds like it would scratch all kinds of itches for me. It also sounds similar to Norah Vincent’s stunt memoir Voluntary Madness. After an 18-month experiment dressing and passing as a man for her first book Self-Made Man (which is several shades better than Voluntary Madness), Vincent was emotionally spent, so she made like Goldilocks and tried out three different mental health facilities–a big city hospital, a private clinic, and an upscale retreat–to experience and investigate the state of mental healthcare. It’s part-memoir, part-journalism, and a nice combination of my love of memoirs and my interest in psychology. This next one’s not a memoir, but did you read George Rabasa’s novel Miss Entropia and the Adam Bomb? These kinda crazy teens end up in a pretty swank facility, and there’s some really touching, funny stuff about what happens to and between them.

LH: I have not, but I do own a copy, and I already know it will be great, because it’s put out by Unbridled Books, and everything they publish is wonderful. Another great book is Touched by Fire: Manic-Depressive Illness and the Artistic Temperament by Kay Redfield Jamison. In it, she looks at famous artists in history who today would probably be diagnosed with bipolar disorder. I find Jamison especially interesting, because not only does she herself suffer from it, which she recounts in her amazing memoir An Unquiet Mind, but she co-authored the classic textbook on bipolar disorder. I think that’s great, her having an inside perspective like that. I mean, I wouldn’t get tattooed by a tattoo artist who didn’t have any ink themselves.

RJS: I’ve had An Unquiet Mind on my shelf for–literally–a decade, since a psych professor recommended it in one of my first classes in college. It’s lived with me in more homes than my husband has! Andrew Solomon’s The Noonday Demon is more nonfiction than it is memoir, but it is super-comprehensive, and it’s a life-changer for understanding the illness. It’s THE depression book in the way that The Emperor of All Maladies is THE cancer book, you know? By that I mean, it’s REALLY big and intimidating, but totally readable and worth it. And I probably don’t need to mention Emma Forrest’s Your Voice in My Head again, but I will anyway. It’s about her experiences with bipolar disorder and offers great insight into the therapist-patient relationship. Hurry Down Sunshine is another good one, written by the always-awesome Michael Greenberg after his daughter had a full-out psychotic break at age 15.

I know I said last week that there’s a lot of voyeurism involved in my reading of memoirs, but with mental health-related stories, it’s just straight-up fascination with what our brains can do to us. How did you get into reading books like these?

LH: I think I started with Girl, Interrupted by Susanna Kaysen, then moved on to Prozac Nation by Elizabeth Wurtzel. These books came out around the time The Liar’s Club by Mary Karr launched the memoir craze, so suddenly the market was flooded with tell-all books, many about mental illness. Although a great book about depression that predates the memoir craze is William Styron’s Darkness Visible. It’s a slim, powerful read. What attracts you to these type of books?

RJS: It’s the former psych major in me. I am totally amazed by what our brains can do–creativity and innovation being the upside, and mental illness being the down. Also, my default action when I haven’t experienced something myself is to read about it so I can better understand it. Prozac Nation was one of my first, too, then I read Wurtzel’s Bitch, which wasn’t as good, but did give 15-year-old me the intense satisfaction of being seen in public reading a book with a naughty word on the cover. That was around the time my mom decided it was imperative for us to read and discuss Reviving Ophelia. You been down that road?

LH: Nope. Maybe I would have, if I’d been nurtured by a mother instead of sent from space in a giant egg… So, we’ve discussed many books with text about mental illness and facilities – I now put forth an amazing book of photographs on the subject: Asylum: Inside the Closed World of State Mental Hospitals by Christopher Payne. It’s astonishing. And frightening – straight-up scary movie stuff in these pictures. Just like the movie Session 9.

RJS: Maybe it was a timing thing. I was 12 when Reviving Ophelia came out, and pretty much everyone’s mother was reading it and using it to force super-awkward conversations. Asylum sounds intense. And maybe like one of those books you read because you know it’s good to know the truth about things, even when the truth is really ugly? (Is the truth in this case really ugly? It sorta sounds like it from that description…)

LH: Almost time to give last call – any other books on the subject you’d like to mention?

RJS: Yes! Lying on the Couch by Irvin D. Yalom. He’s a well-known psychologist, and while the book is fiction, it’s very thinly-veiled fiction about the lies people tell their therapists. The first thing they tell you when you go to school to become a psychologist is that clients lie, a LOT, and this is a fun peek behind the curtain. Or the proverbial blank screen, as it were. You?

LH: Yes – Angelhead by Greg Bottoms. He tells of how he watched as his older brother became more erratic and violent as they grew up in the 70s, which was blamed on drug use, but would turn out to actually be acute paranoid schizophrenia. Because his brother went so long before being treated, he did a lot of damage to himself and others. It’s very sad, but also incredibly interesting.

RJS: Consider it added to the list. Or not. Maybe I’m lying?

Dish it, readers. Do you have a weak spot for mental health-related stories?