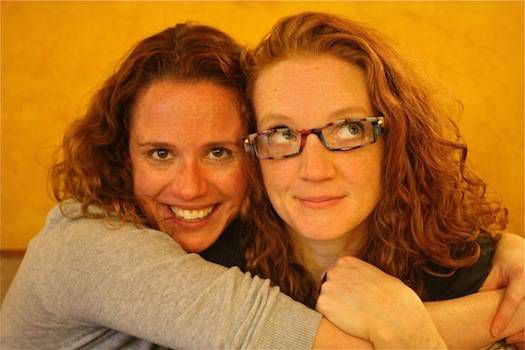 Last week, the Well-Readheads descended like book-locusts on NYC for Book Expo America, the country’s largest book industry gathering. (Don’t worry – they put NYC back the way they found it.) 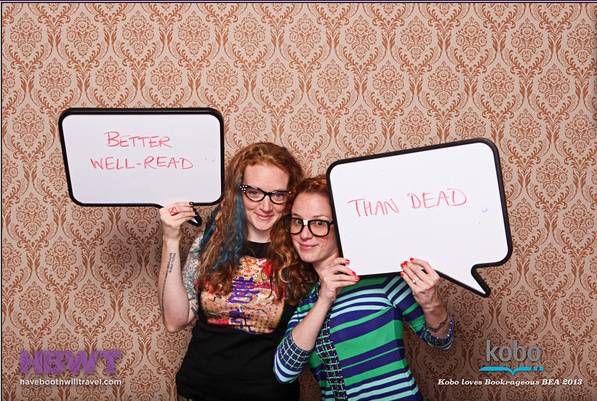 The Well-Readheads at the Bookrageous BEA Bash. Thanks Have Booth Will Travel!

LH: So, my little ginger lifemate, another BEA has come and gone. I was thrilled I got to see so many awesome people. And BOOKS. So many books! I controlled myself this year, and only came home with twenty-seven books. (Last year, it was forty-eight.) One that made its way home with me is the young adult novel, Under the Empyrean Sky by Chuck Wendig (Skyscape, July), which I am so excited about! I love his books, and getting to meet Chuck was certainly a highlight. He is so kick-ass. Did you enjoy the show? 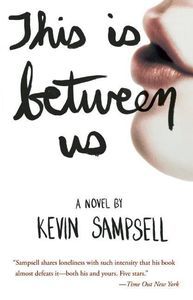 RJS: I did! There’s nothing like spending a week with a bunch of people who love books as much as we do to renew one’s faith in humanity, even when some of those people are librarians wielding wheelie suitcases and bloggers throwing ‘bows to get the galleys they want. In a feat previously thought impossible, I came home with more tote bags than books this time (hooray for digital galleys!). One that I’m super-excited about is Kevin Sampsell’s forthcoming novel This Is Between Us (Tin House, November). I adored his memoir A Common Pornography (which is mostly NOT about pornography) and can’t wait to see what he’s doing with fiction. Any new books from old favorites in your BEA bag?

LH: Oh, yes! Scored the new Nicholson Baker, Traveling Sprinkler (Blue Rider Press, September), which is the follow-up to The Anthologist. I’m totally Team Paul Chowder, and Baker is one of my favorite writers. And there’s a new David Schickler, a memoir called The Dark Path (Riverhead, September), about Schickler’s struggle with his strong desire to become a priest, but also to have sex with women. Spoiler: He’s not a priest. If you haven’t read Schickler’s book of stories, Kissing in Manhattan, I recommend dropping everything and doing so right now. It’s like woah. What sugar is in your bowl?

RJS: I’m all hot and heavy with anticipation for the David Schickler as well. Kissing in Manhattan was sooooo good, and I’ve been waiting FOREVA for him to do something new. Plus it’s about religion and sex! Where those Venn diagram is one of my kryptonites. Speaking of sex, let’s talk about Little Cat by Tamara Faith Berger (Coach House Books). The paper fortune tellers they gave away with it at BEA made me blush (which we both know ain’t easy to do), and HOO BOY did I turn 50 shades of pink when I played the “open it to a random page and see what happens” game with a friend last week. 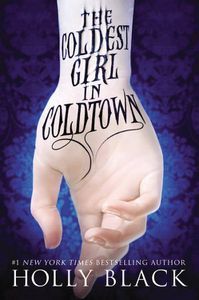 LH: Inorite??? It’s all kinds of naughty. But I am fine with naughty, as long as it’s well-written. I am definitely reading this book. For science. Let’s see… I picked up the new Holly Black book, which I think has the best title so far this year: The Coldest Girl in Coldtown. Holly was really cool (ha!) and we bonded over having blue hair, which was awesome. And I grabbed Mister Max: The Book of Lost Things, the new Cynthia Voigt, because, hello, she’s a legend.

RJS: Cue my elated squeal about the news that Cynthia Voigt is still alive. I read and re-read Dicey’s Song until it fell apart when I was a kid, and I had no idea she was still around. And still writing! That’s good news. Even though I didn’t love his last novel (and by “didn’t love,” I mean I thought it was 300 pages too long), I picked up a galley of Wally Lamb’s We Are Water, due out from Harper Collins in November. I read She’s Come Undone and I Know This Much is True at an impressionable age, and I’ll probably read everything he ever writes in hopes of recapturing some of that magic. Did you happen to pick up The Lion Seeker by Kenneth Bonert? It won a big BEA debut novel thingamajig, and fellow Rioter Jenn picked it as the best book she read in May. It’s the buzziest of the buzzed, and it looks great!

LH: No, sadly I missed getting that one. The BEA Buzz book I managed to snag was The Facades by Eric Lundgren (Overlook, September), which sounds really interesting, plus it’s pubbed by Overlook, who publishes Charles Portis, so I’ll do whatever they tell me. Speaking of ‘O’ publishers, I visited the lovely people at Other Press and picked up A Well-Tempered Heart, the sequel to The Art of Hearing Heartbeats. AoHH has been a huge success for us at the store, and I’m excited to let customers know there’s another one. Another book I that I really wanted but missed is The Maid’s Version by Daniel Woodrell (Little, Brown, September). Woodrell is the author of Winter’s Bone, and has hardcore fans. The galleys went super-fast – I couldn’t throw elbows fast enough to reach them. But the wonderful people at LB managed to have a copy waiting for me on my desk when I got back. Three words: magic book fairies. Did you have any exciting celebrity sightings? 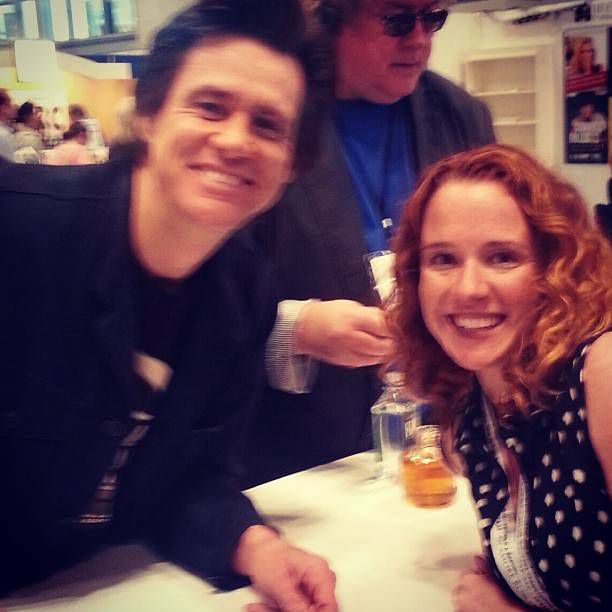 Getting cozy (and blurry!) with Jim Carrey.

RJS: I met Jim Carrey! He is self-publishing a children’s book and did not one but TWO signings last week. Not quite as awesome as when I met Flava Flav a couple years ago (yeaaaah boooooy), but it was still a really fun moment. BEA always has random not-really-bookish celebrities wandering around. You met a certain famous kitty, didn’t you?

LH: I saw Grumpy Cat! She’s so tiny! The line was crazy-long, and I waited an hour to see her. Of course, you know I would have stood in line to see a cat they brought in off the sidewalk. I heart kitties. Speaking of tiny, I also spotted Snooki walking around – she’s even tinier in person. But the most exciting for me was Robbie Robertson. Legend, he is. Any last BEA bits you want to mention? 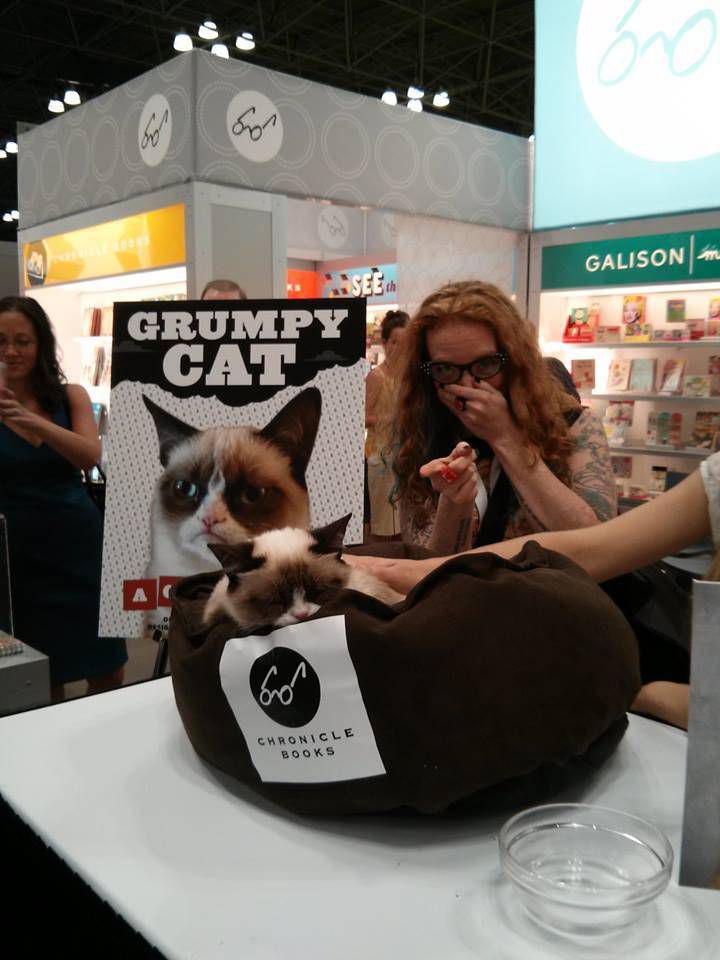 RJS: You know, I just want to say that I think it’s awesome that BEA opens the show floor to readers on the last day now. They call it Power Readers Day, and it gives people who just plain love books a chance to peek inside the industry, meet authors and publishers, and learn more about how books are made. It’s such a cool idea, and all of the power readers I talked to were so kind and fun and enthusiastic. It’s easy to get jaded and frustrated about publishing, and a reminder that there are so many people in the world who love books was good for my soul.

LH: Rebecca, you’re a ginger: We don’t have souls…

RJS: But we have great hair, and as we’ve learned from Jim Carrey and Grumpy Cat, a good mane will get you pretty far. Til next time, readers, remember: better well-read than dead!