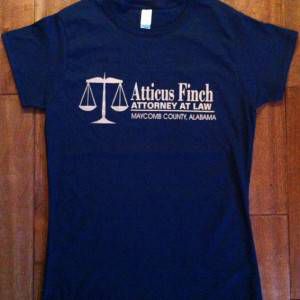 I named my youngest son Atticus. Well, youngest by 60 seconds. My other twin’s name is Rhett- I named them after two Southern literary gentlemen who kick against the goads of the times in which they exist, but who both still exhibit views and prejudices I don’t always love. My boys, I figured, are my new home, so I named them after my first one– the South, a place I love but criticize. Their names carry both my love and my expectations, my hope that my sons will leave this region a better place than what it was when they entered it. Kick those fucking goads, my boys.

Rhett’s namesake is static and unthreatening- it’s harder to be more of a rake or a cad or a scoundrel than Rhett Butler, as charming and loyal(ish) as he is. But then, I thought the same thing of Atticus’s name. If you’re looking for an upright character who doesn’t disappoint after which you can name a son, there isn’t really a safer bet. But alas, the Atticus Finch of To Kill a Mockingbird is also the Atticus Finch of Go Set a Watchman, who by all accounts is now a racist old segregationist with very little to redeem him.

This leaves me here:

We’ll leave Rhett’s name for another post- it is, after all, Harper Lee Day, and my reasoning there is a little more complicated. But Atticus is easy. Atticus is Goodness Personified (TKAM Atticus, anyway- let’s just consider GSAW Atticus to be a dark universe Atticus, one entirely separate from the one we all know). He’s morality in a white linen suit, sweating in an Alabama courthouse, hopelessly trying to bring justice to a wrongfully accused man. He’s the polite but firm confronter of racist lynch mobs, standing silently as his daughter reveals their sins to them and they leave, one by one, like the Pharisees walking away from the woman they wanted to stone. He’s the white man I never knew growing up in the South, but always wished I had. Atticus wasn’t just ahead of his time- he was ahead of mine.

He’d still have his work cut out for him now, in 2015. Black people are incarcerated at staggeringly higher rates than white people. Racial profiling by the police is near-constant, and those interactions escalate to police brutality with a frequency that is, frankly, disgusting. Black people are killed by police at a rate three times higher than the rates of white people or other minorities. Anyone who tells you racism in America is over is selling something.

I didn’t name my son Atticus with the belief that he’d literally become a lawyer and fight this horrible bullshit (though I would love it if he did). But I will do my best to ensure that both my boys are aware of the state of things and grow up to be men who make things better instead of worse. And they’re functionally white (they are part Filipino, but not enough to show in their appearance), so making things worse would be so easy.

I’ve tied my son Atticus to this place with his name. I have no plans to ever leave the South, but I don’t have that same expectation of my children. If and when Atticus leaves for wherever the grass is greener for him, he’ll have to remember the troubled place he’s leaving. It will rise up every time someone calls for him, and maybe he’ll be tempted to be a little better, do a little better, that day. And no newer, lesser version of Atticus Finch can change that.