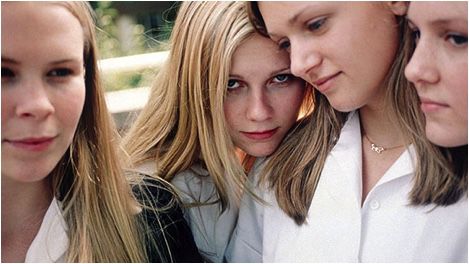 (Trigger warning: this article, and the book it describes, contain graphic descriptions of suicide.) 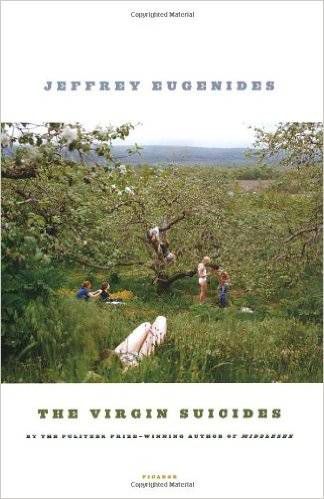 Jeffrey Eugenides is a brilliant, versatile author, and his novel Middlesex is one of my favorite books. Overall, I found his first novel, The Virgin Suicides, not as good as Middlesex, much better than The Marriage Plot, and completely different from either of these books. It’s haunting, atmospheric, and elegantly written. The first sentence is chilling: “On the morning the last Lisbon daughter took her turn at suicide—it was Mary this time, and sleeping pills, like Therese—the two paramedics arrived at the house knowing exactly where the knife drawer was, and the gas oven, and the beam in the basement from which it was possible to tie a rope.” It sounds sensationalized, but this isn’t a pulpy novel. The writing is nuanced and even delicate.

The narrative voice is one of the most distinctive yet frustrating aspects of the book. It’s written in the first-person plural, which is extremely rare. I’ve only come across it in Faulkner’s short story “A Rose for Emily” and in certain chapters of Faulkner’s novels. The narrators are several neighborhood boys who are infatuated with the Lisbon sisters. I wasn’t even sure how many boys there were until I watched the movie. This has the strange effect of making the narrators indistinguishable—just a nameless “we.” The boys attempt to befriend the Lisbon sisters, but their relationship is mostly obsession from a distance. Because the boys observe them from afar, both the narrators and the girls seem interchangeable. It’s too facile to say that The Virgin Suicides is about the limits of the male gaze, but the narrative objectifies them in many ways, without ever getting into the girls’ heads.

The unusual narrative voice is one of the first signs that the entire book is ambiguous and elusive—even nightmarish. Pop culture references and descriptions of a local elm blight situate the book clearly in Michigan in the 1970s. In contrast, it’s hard to pin down anything that specific about most of the characters. What we learn about all five Lisbon sisters is mostly the boys’ speculation.

Another ambiguous element is the girls’ religious upbringing. Their parents are strict and overbearing. The narrators mention several times that the Lisbons are devoutly Catholic, almost using this to rationalize their odd behavior. Of course, part of the issue is that the boys are merely outside observers. Readers get virtually no insight into the girls’ interior lives. During her first suicide attempt, Cecilia is clutching a laminated holy card with an image of the Virgin Mary. After the suicides, the boys keep finding the holy cards scattered around the neighborhood. All of the girls’ names have some significance in Catholicism, and Bonaventure is even a 12th century male saint. This arguably makes them seem ultra-traditional, rather than fanatical and atypical.

Some readers have accused the book of idealizing death. A.O. Scott’s review of Sofia Coppola’s excellent movie adaptation says that the movie “embalms” the girls. To some extent, I agree: it’s by turns macabre and maudlin. Some of the imagery is Gothic: Cecilia, the youngest sister, wears a wedding dress for weeks after her first suicide attempt. The principal of their parochial high school proclaims a “Day of Grieving” after Cecilia’s death and quotes a Christina Rossetti poem. This seems clueless or insensitive on his part, as if he’s trying to romanticize Cecilia instead of reaching out to her grieving family and classmates.

After the girls’ parents withdraw them from school and isolate them in the house, there’s a long description of the fetid smell coming from the house, as if they’re rotting while still alive. Lux, in particular, is described as too delicate and perfect for this world. Of course, this is partly because the boys are obsessed with her. Sentences like this seem to romanticize the girls’ early deaths: “We were slowly carted into the melancholic remainder of our lives (a place the Lisbon girls, wisely, it began to seem, never cared to see)” (180). I understand that the boys probably lacked an understanding of abuse and mental health as teenagers, but it’s disturbing to see them idealizing the Lisbon sisters’ deaths twenty years later. Maybe their adult perspective seems immature because the deaths traumatized the entire town.

Some of the neighbors seem to view the suicides as a symptom of a larger societal malaise: “They had killed themselves over our dying forests, over manatees maimed by propellers as they surfaced to drink from garden hoses; they had killed themselves at the sight of used tires stacked higher than the pyramids; they had killed themselves over the failure to find a love none of us could ever be. In the end, the tortures tearing the Lisbon girls pointed to a simple reasoned refusal to accept the world as it was handed down to them, so full of flaws” (180). This canonizes the girls into prophets or martyrs, glossing over the reality of their isolation and possible abuse.

The narrators idealize the girls but also apparently blame them or consider them selfish. The boys marvel over “the outrageousness of a human being thinking only of herself” and “the emptiness of a creature who put a razor to her wrists and opened her veins, the emptiness and the calm” (182, 183). Today, I hope that most readers would understand how wrong and harmful it is to characterize suicidal people as selfish.

However, the narrators’ immaturity is not necessarily a flaw in the writing, but important to the story. The boys’ obsession with the Lisbon sisters was such a formative event in their lives that even as adults, they struggle to explain their deaths. What appears to be idealizing their deaths could actually be an attempt to make sense of such traumatic events and ascribe meaning to them. Although some readers might find it alienating, the novel’s refusal to provide easy answers is one of its biggest strengths. For readers willing to wrestle with ambiguity, this is a haunting book that showcases Eugenides’s gifts as a writer and holds up well.