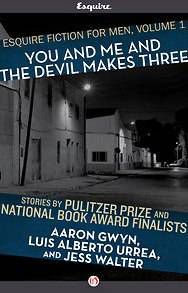 Yesterday, The New York Times reported that Esquire will begin publishing a series called “Fiction for Men.” The first volume of the digital-only series will be released June 12, with stories by Jess Walter, Aaron Gwyn, and Luis Alberto Urrea. While I think this is a smart and interesting idea from Esquire, let me get something out of the way before I talk about why it is smart and interesting. Like most labels, especially those that describe gender, “fiction for men,” “women’s fiction,” “young adult literature,” and “classics” are only useful illusions. They describe no real category, no definite set, no finite and delineated list. These labels exist to make discussing, marketing, buying, writing, reading, and selling books easier. Thinking about genre like this makes arguing about whether or not some book is “really” YA or literary fiction seem pointless, but it also makes it easier to see why they are used.

In the case of Esquire‘s “Fiction for Men” series, the label is clearly more about defining audience than it is a descriptor of the work being published. A more precise label probably would be something like “Fiction for the Kind of Man Who Reads Esquire.” This is clearly a relatively small set of men, let alone all people who might like to read things. And that is exactly the point–Esquire isn’t trying to market the books to everyone, just the sort of someone who might find this sort of collection appealing. Certainly, Esquire has an audience that doesn’t read as much fiction as, say, The New Yorker‘s audience, though I am not sure that Esquire‘s audience wants to be reading more fiction. But this seems to be exactly the goal of this experiment–to find out if they do. It matters little if some people are turned off by the “Fiction for Men” phrase; it matters a great deal more that some are attracted by it. That some men trust Esquire to define what men like is more useful and revealing than what Esquire says the included fiction will be like: “plot-driven and exciting, where one thing happens after another…at the same time, dealing with passages in a man’s life that seem common.”

On a larger scale, I think creating specialized ebooks for pre-existing audiences is a supremely smart idea. As traditional publishing and mainstream reviewing wane, a new set of gatekeepers will need to sort and highlight material for readers. Businesses, groups, and individuals that are trusted will be able to focus the attention of their audience on specific titles. A recent partnership between FSG and Scientific American is a similar, if less culturally charged, example of this strategy, as was Oprah’s Book Club, in its heyday. I suspect that having a digital imprint will be standard for most media companies, the more focused the better. ESPN, The History Channel, The New Yorker, Real Simple: it’s easy to imagine companies like these becoming de facto publishers.

The more innovative idea to me would be for influential individuals identifying, releasing, and supporting certain books and authors. If there were a “Stephen King” or “Jennifer Egan” or “Neil Gaiman” or “JK Rowling” press that released four titles a year, wouldn’t you pay attention?